The New Class of Comfort TV: 16 Shows to Watch When You Run Out of Friends and The Office

What did you stream, in the early months of the pandemic, to feel normal for an hour? Did you mainline Tiger King, as Nielsen says 34 million viewers did in its first 10 days on Netflix? Or did you return to an old favorite—something from NBC’s classic 1990s Must See TV lineup or a prime-time soap that luxuriates in the white noise of rich-people problems?

No matter what show you turned to last spring, chances are that, nearly a year later, you could use something new to soothe your still-locked-down soul. Happily, TV has in the past year achieved what New York magazine calls “Peak Comfort.” Netflix has invested in some diabolically addictive reality shows, and streaming service discovery+ launched in January with lifestyle content from Food Network, HGTV and more. Dozing off to House Hunters isn’t just for cable subscribers anymore.

A beloved scripted series is harder to replace, but don’t worry: while Friends may be a finite resource, hangout comedies spring eternal. Did you know that the minds behind Bob’s Burgers and The Good Wife have new shows out? Here are our picks to replace—or just complement—your comfort TV standbys.

Maybe you followed Friends from Netflix to HBO Max; maybe you’re a longtime HBO subscriber who turned to the streaming juggernaut when the new service launched midway through a long, empty pandemic year. Either way, at under 25 minutes apiece, 236 episodes might’ve gone by more quickly than you expected. If you’re looking for a similar vibe of young adult pals figuring out their lives and loves in a big city, click over to Insecure. Issa Rae’s observant dramedy follows an underachieving Los Angeles nonprofit worker (played by Rae) who’s staring down 30 with three close girlfriends and their parade of imperfect suitors.

Stream both shows on HBO Max.

If you’ve finished The Office, try What We Do in the Shadows

Missing The Office? What We Do in the Shadows is basically just that, but with vampires. Based on a film of the same name from Jemaine Clement (Flight of the Conchords) and Taika Waititi (Thor: Ragnarok), this hilarious show about undead roomies is shot mockumentary-style. In fact, the series even plays homage to The Office through one of its characters, an “energy vampire” who unleashes his dullness on unsuspecting office workers to zap them of their energy.

Stream The Office on Peacock and What We Do in the Shadows on Hulu.

Throughout the, er, tumultuous Trump years, many left-of-MAGA viewers escaped into the liberal fantasy of turn-of-the-millennium White House drama The West Wing. Casting Martin Sheen as the thoughtful President Josiah Bartlet, creator Aaron Sorkin chronicled political intrigue while defending the dignity of the executive branch. The acclaimed Danish series Borgen, which imagines how the tenure of that country’s first female Prime Minister might look, would make a perfect binge during this period of regime change. Brigitte Nyborg, played by the wonderful Sidse Babett Knudsen, is a fascinating character: a woman so centrist her party is called the Moderates, whose sharp political instincts are tempered by a fundamental disdain for corruption. The first three seasons are streaming on Netflix, where a fourth is set to arrive in 2022.

Stream The West Wing on HBO Max and Borgen on Netflix.

When the CW’s rich-kid soap Gossip Girl was good, it was obscenely, addictively good. But let’s be honest: the second half of its six-season run bordered on unwatchable. Besides, who really has an appetite for spoiled uptown teens and their real-estate-mogul dads these days? Dash & Lily, on Netflix, is a very different kind of show about the love lives of Manhattan high schoolers. Austin Abrams and Midori Francis play the title characters, two oddball old souls who flirt from afar after he finds a notebook she left behind at a bookstore and strikes up a correspondence. Come for the romance, stay for one of TV’s most authentic depictions of the teenage city.

Leave it to Canada to come up with a show so gentle and funny, it made America fall in love with family sitcoms again. And while the Roses of Schitt’s Creek may be irreplaceable, at least we still have their CBC neighbors the Kims. Based on Ins Choi’s play of the same name, Kim’s Convenience follows a Korean-born couple (Paul Sun-Hyung Lee and Jean Yoon) who own a corner store in Toronto and, in their meager spare time, lovingly meddle in the lives of their two 20-something children (Andrea Bang and Simu Liu). Though it’s more grounded than Dan and Eugene Levy’s farce—the generation gap between immigrant parents and their Canadian kids is a big theme—both series feature quirky characters who care deeply for each other. There are four seasons of Kim’s so far, and the CBC has already renewed it for two more.

Stream both shows on Netflix.

Most comedies earn laughs with cynicism. It’s harder to build a show around an unflappably optimistic character, as Parks and Recreation did with the ebullient Leslie Knope. But the titular hero of Ted Lasso would make Leslie proud. An American football coach tasked with running a British Premier League soccer team, Ted meets fans and players’ jeers with can-do aphorisms and basic human decency. What a comforting thought that one kind person can heal a community, one home-baked box of biscuits at a time.

Stream Parks and Rec on Peacock and Ted Lasso on Apple TV+.

If you’ve finished The Good Wife, try The Good Fight

Maybe it’s cheating to point Good Wife fans toward the show’s woefully underappreciated spin-off. But with this newer series, creators Robert and Michelle King have injected adrenaline into the legal drama genre: The Good Fight lives up to its name and brazenly skewers real-life political figures. It’s perfect for anyone who takes comfort in righteous indignation.

Buffy the Vampire Slayer was a once-in-a-generation show, transforming supernatural teen pulp into an allegory for growing up and becoming a stronger, more complex and, in some ways, more wounded person than you ever thought you’d be. Teenage Bounty Hunters—a Netflix dramedy about a pair of twins (Maddie Phillips and Anjelica Bette Fellini, in two of last year’s most charismatic performances) from a wealthy, super-Christian Georgia family who moonlight as, yes, bounty hunters—is not Buffy. And, sadly, it has already been canceled, after just one season. But if you’re seeking a show about smart, tough teen girls who kick ass, navigate coming-of-age rites and exchange witty banter, Bounty Hunters should hit the spot.

Stream Buffy on Amazon Prime or Hulu, and Bounty Hunters on Netflix.

Harley Quinn has more on its mind than poking fun at superhero tropes. The show begins with Harley’s breakup with the Joker, and while the series doesn’t shy away from acknowledging just how toxic that relationship is, it quickly turns its focus toward Harley’s blooming friendship with a Daria-esque Poison Ivy. Like BoJack Horseman before it, this excellent animated show for adults is interested in the psychology of relationships. Unlike BoJack it centers on joyful, not dour, ones.

Stream BoJack on Netflix and Harley Quinn on HBO Max.

Mike Judge’s HBO comedy Silicon Valley captured the absurdity of the 2010s tech industry, where a small army of guys with huge egos, high IQs and astonishingly little common sense competed to build companies that were invariably described as “Uber for [your service-industry niche here].” Its spiritual descendant is Mythic Quest, a wonderful Apple TV+ sitcom set in the similarly nerdy, cutthroat world of the video-game studio behind a breakout MMPORG in the World of Warcraft mold. Created by It’s Always Sunny in Philadelphia vets, with a cast that includes F. Murray Abraham and Community standout Danny Pudi, the show skewers tech-culture misogyny without marginalizing female characters the way Silicon Valley sometimes did. A bonus episode shot remotely during the pandemic may well be the best half-hour of TV to come out of quarantine.

The Flight Attendant knows exactly what it is: a pulpy mystery that revels in its twists. Even bloodier and more absurd than Killing Eve, the drama centers on a flight attendant (Kaley Cuoco, who scored a Golden Globe nomination for her performance) accused of murder. She careens her way across the globe, looking for clues to absolve her and drawing police attention in the process. She’s a hot mess, and you won’t be able to tear your eyes away from her.

Stream Killing Eve on Hulu and The Flight Attendant on HBO Max.

This Shonda Rhimes–produced costume drama scratches the same romantic itch as Downton Abbey, but it caters to a more modern audience. Diverse casting, string arrangements of songs like Ariana Grande’s “Thank U, Next” and steamy sex scenes drag a staid genre into the cultural zeitgeist.

Stream Downton Abbey on Amazon Prime or Peacock, and Bridgerton on Netflix.

If you finished Full House, try The Baby-Sitters Club

Full House is the kind of sitcom that could give adults a toothache, but in times like these, who could blame a person for missing their old, familiar friends waiting just around the bend? The revival, Fuller House, though? Unforgivably bad. For a similarly kid-friendly treat without the saccharine aftertaste, try Netflix’s Baby-Sitters Club reboot, which updates Ann M. Martin’s beloved middle-grade books for a new generation. The characters have depth, their families feel both specific and authentic—and there are plenty of jokes that will land with viewers over 13.

Stream Full House on Hulu and The Baby-Sitters Club on Netflix.

If you finished Curb Your Enthusiasm, try Dave

Spite stores. Chat-and-cuts. Improperly secured soup and insufficiently respected wood. With Curb Your Enthusiasm, Seinfeld co-creator and “social assassin” Larry David has brought us more than two decades’ worth of cringe comedy based on his privileged life. Dave, the semi-autobiographical FX sitcom by rapper Lil Dicky, presents a slightly warmer, millennial take on this character—an essentially well-meaning but also hilariously selfish and neurotic Jewish guy navigating fame-adjacent life in L.A. Every episode could end with the Curb theme song.

Stream Curb on HBO Max and Dave on Hulu.

If you finished Awkward., try Never Have I Ever

Before MTV swore off scripted programming to make room for more shows about catfishing, teen pregnancy and a now-middle-aged Jersey Shore cast, it had one of cable’s best depictions of 21st-century adolescence. The black comedy Awkward. followed an anonymous high schooler who inadvertently gets the attention she craves after her classmates misinterpret a freak accident as a suicide attempt. Like that show, whose star Ashley Rickards embodied both the pain and the exhilaration of youth, Mindy Kaling’s Netflix comedy Never Have I Ever stands out from the crowd thanks to an irresistible young star: Maitreyi Ramakrishnan. As a 15-year-old brain who’s distracting herself from the sudden death of her father via an ill-conceived campaign for popularity, Ramakrishnan’s high-spirited performance wrings humor out of trauma.

Watch Awkward. on Amazon Prime and Never Have I Ever on Netflix.

Bob’s Burgers is—with apologies to Futurama but not to Family Guy—Fox’s best animated comedy since The Simpsons. And while the team behind it attempts to hit again on the network with the debut of The Great North on Valentine’s Day, creator Loren Bouchard has already given us a delightful follow-up in Central Park. In place of the burger-slinging Belchers, the show introduces the equally odd and endearing Tillermans, who live on the very grounds of the Manhattan oasis thanks to patriarch Owen’s (Leslie Odom Jr.) park-manager gig. In a bonus New York tribute that plays to Bouchard’s past strengths, the series is also a musical, featuring original songs belted by Tituss Burgess, Daveed Diggs and other A-list Broadway alums.

The original version of this story misstated the setting of Teenage Bounty Hunters. It is Georgia, not Texas. 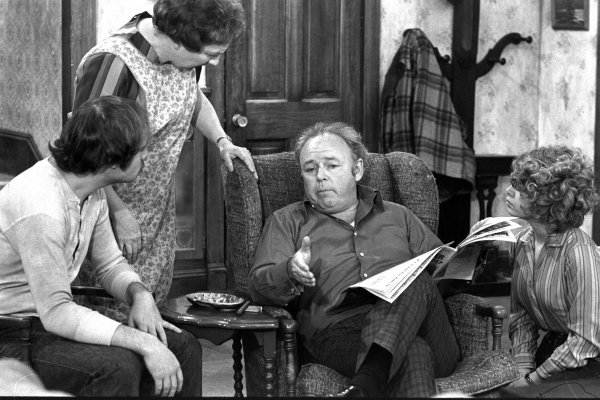 How Archie Bunker Changed TV—and America
Next Up: Editor's Pick