Review: Thor: Ragnarok Is More an Approximation of Fun Than the Real Thing

Thor is one of the more ridiculous Marvel superheroes, which also makes him one of the best. You don’t need to have multiple generations’ worth of superhero mythology under your belt to comprehend this God of Thunder with a hearty appetite for beer and a bodybuilder’s brawn; it’s permissible to just like him. As Chris Hemsworth has played him — first in Kenneth Branagh’s nutty 2011 operatic dazzler Thor and again in Alan Taylor’s far more drab Thor: The Dark World, while also touching down here and there in the other Avengers movies — he’s hard not to like. With his very being, he invites you to laugh at him. Just look at the way he wields his disproportionately tiny hammer of power as if it were a baby rattle. You have to be pretty secure in your masculinity to pull that off.

Thor: Ragnarok is boyishly eager to reveal Thor’s goofy likability to us, as if it were something we hadn’t yet cottoned to. Directed by the enormously talented New Zealand filmmaker Taika Waititi, it’s well intentioned but ultimately numbing, an instance of fun overkill whose ultimate goal seems to be to put us into a special-effects coma. Not even the occasional inspired touch — like Cate Blanchett as the silky villainess Hela — can save it. It’s at least three movies rolled into one, with maybe half a decent one in there. But like Thor himself, it sure is big. And if you value quantity over quality, it’s a lot of movie for the money.

MORE: How Thor: Ragnarok Sets Up What’s Next in Avengers: Infinity War

As Thor: Ragnarok opens, our big Norse god hero is imprisoned in a big place by a big thing with big horns. As he swings perilously from a suspended cage, he taunts the thing with one of his bro-ey bon mots: “Oh, that’s your crown. I thought it was a big eyebrow,” he says breezily, a clear signal that this is going to be one of those movies that calls attention to how saucy and irreverent it is, without coming anywhere close to actual boldness. Thor vanquishes the big thing and escapes with its big eyebrow, bringing it to his home world of Asgard, where his one-eyed pops, Odin (Anthony Hopkins), awaits. At least, he thinks it’s Odin: It’s really his devilish brother, the pale, lank-haired, passive-aggressive Loki (Tom Hiddleston), in one of his usual shape-shifting tricks. The two proceed to bicker and spar, occasionally finding shaky accord, like Marvel’s version of Noel and Liam Gallagher.

The real Odin eventually turns up, warning the boys about their older sister, Blanchett’s hellraising Hela, whom he’d sent off years ago after he realized how dangerously ambitious she was. Suddenly, Hela appears, a lithe vision in a black and beetle-green unitard. Her makeup looks like what happens to a smoky eye after you’ve slept in it, and she sports a marvelous set of black antlers, as if she’d raided a glam hunting lodge. She intends to take over Asgard and fulfill its destiny of being destroyed — that’s what the whole Ragnarok thing is about — and she’s surely a very busy Norse goddess, because she disappears for long stretches of the movie.

MORE: What the Thor: Ragnarok Post-Credit Scenes Mean for the Future of the Marvel Universe

When she’s not around, Jeff Goldblum pops up, with a stripy chin and a glittery one-armed coat, as the megalomaniacal kook Grandmaster. His entrance is a grand one — in keeping with the movie’s aim to make us think it’s surprising even when it isn’t really, it’s very “Ha ha, look, it’s Jeff Goldblum!” But at least his shtick temporarily enlivens the movie. Other appealing performers show up: Tessa Thompson is the Valkyrie Valkyrie. Mark Ruffalo smashes his way into Thor: Ragnarok first as that big green bad mood Hulk and later, in the movie’s best bits, as the blissfully neurotic Bruce Banner.

Thor: Ragnarok is packed tight with zooming space vehicles and noisy thunder battles, but the movie’s extravagant excess is more narcotizing than energizing. Even poor Thor seems lost in all of it, and he’s supposed to be its star. Waititi appears to be following the example of James Gunn’s tiresomely adorable Guardians of the Galaxy movies. Even if his touch is a tad lighter, like Gunn, he sends up the flare every other minute: “Hey, this is a movie based on a comic-book! It’s supposed to be fun! Let’s not take any of it too seriously!” These are increasingly elaborate approximations of fun rather than the real thing. Meanwhile, the studio’s money — in this case, it’s that of Walt Disney Pictures — is splashed resplendently on the screen. The meter is running every minute, and don’t you forget it.

MORE: How Did the Hulk End Up on Sakaar in Thor: Ragnarok?

All of this would be less depressing if Waititi were just your random independent filmmaker making the jump to big-budget pictures. This isn’t the first overstuffed superhero movie, and it won’t be the last. But he’s too original to be wasting his time this way. His previous features include the breezy, offbeat Hunt for the Wilderpeople (2016), a lovely but not cloying picture about grief and coming of age (and one with a foundation in Waititi’s Maori roots), as well as the gloriously wiggy lo-fi vampire comedy What We Do in the Shadows (2014). Waititi has a gift for ramshackle madness with a strong undercurrent of compassion — but honestly, where is that going to get you these days? Today the reward for being a terrific or at least just an interesting independent filmmaker is to be put at the helm of a big-budget superhero movie, which means you shoot for a couple of months and then spend a year (or more) in post-production, supervising the layering of elaborate special effects and, most likely, putting out lots of fires. Much of moviemaking is putting out fires — it has always been so. Still, the big movie franchises are not where the best filmmaking is being done. You can’t blame anyone for wanting to try his — or her — hand at it. But the hammer of power is really a pretty tiny one, much, much smaller than it looks on the big screen. 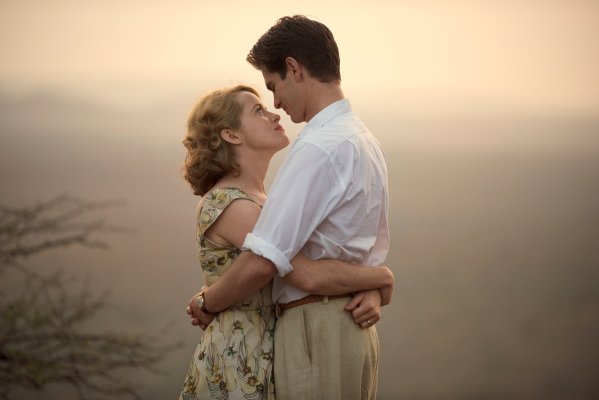 Review: In Breathe, Love Takes Bravery Too
Next Up: Editor's Pick