Tiger King: Murder, Mayhem and Madness, Netflix’s latest true crime docuseries, dives into the wild world of big cat owners and enthusiasts in an exploration of one man’s path from attention-seeking zoo owner to convicted criminal.

Joseph Maldonado-Passage, better known as “Joe Exotic,” is the tiger breeder at the center of the series. A “gay, gun-toting cowboy with a mullet,” as he called himself, Joe Exotic operated a big cat zoo in Oklahoma for several years before he was sentenced to prison earlier this year for cooking up a murder-for-hire plot against his nemesis, Carole Baskin, who runs the Big Cat Rescue in Florida.

Over seven episodes, co-directors Eric Goode and Rebecca Chaiklin chart the course of Joe Exotic’s eccentric life and introduce viewers to other figures in the big cat world—in a story that involves polygamy, mysterious disappearances, heavy drug use, cult-like leaders and the exploitation of both humans and animals. Here’s the true story behind Tiger King.

Who is Joe Exotic?

Born Joseph Schreibvogel in 1963, Joe Exotic purchased a pet store in Texas in 1989 with his brother, Garold Wayne, inspired by their shared love of animals. After Garold died from injuries sustained in a car crash in 1997, Joe Exotic used the money from a settlement won by his family to buy a ranch in Wynnewood, Okla., and turn it into a zoo dedicated to his brother’s memory.

The Garold Wayne Exotic Animal Memorial Park, known as the G.W. Zoo, became populated by a growing number of exotic animals as Joe Exotic acquired tigers, lions, ligers and more. As the G.W. Zoo grew in popularity in the early 2000s, Joe Exotic became something of a local celebrity. To keep the zoo running, he continued to breed animals to keep up a constant supply of tiger cubs, and he took his exotic pets on tours, charging people for photo ops.

Because he bred tigers, Joe Exotic also became a target of animal rights activists, who accused him of animal abuse, among other concerns. His detractors included Carole Baskin, the owner of the Big Cat Rescue in Florida, who soon became the biggest thorn in Joe Exotic’s side. Although Baskin at first comes across in the series as a woman who simply loves animals and wants to do right by big cats, Tiger King reveals that there’s more in going on beneath the surface. The fight between the two eventually escalates and comes to take over both of their lives—up to and including a murder plot.

Who is Carole Baskin?

The founder and CEO of Big Cat Rescue, a non-profit sanctuary for exotic cats in Tampa, Baskin says in the series that her fascination with cats dates back to childhood. Her love for cats extends beyond caring for them in the sanctuary—in the episodes she appears in, Baskin frequently wears tiger or cheetah print clothes, and her home is completely decorated with figurines of exotic cats.

Baskin, who now runs the sanctuary alongside her doting husband, Howard, has a difficult past. She opened the facility in the 1990s with her then-husband Don Lewis, a millionaire who mysteriously disappeared in 1997. Lewis’ daughters from a previous marriage, who appear in the series along with his first wife, have suggested Baskin killed their father and fed him to her tigers. Baskin, who has consistently denied the accusation, asserts that Lewis simply disappeared without explanation.

Unlike Joe Exotic and other big cat owners, Baskin does not breed exotic cats. Her mission for the Big Cat Rescue is to give the animals have a place to live out the rest of their lives in peace. Baskin, who takes up an anti-animal-breeding stance and begins considering it abuse, criticizes Joe Exotic, sparking years of animosity that eventually bankrupts him and lands him in prison.

What was the basis of Joe Exotic and Carole Baskin’s mutual hatred?

The feud between Joe Exotic and Baskin came down to a couple of elements: Baskin wanted the G.W. Zoo to stop breeding exotic cats, and she went to great lengths in an attempt to put Joe Exotic out of business, including asking her broad online fanbase to send mass emails to venues where he took his animal tours, asking them to stop hosting his shows.

Joe Exotic, who viewed Baskin as a hypocrite for also making money off of exotic animals through her sanctuary, retaliated in pretty extreme ways. He started filming videos in which he read aloud copies of Baskin’s diary, which he’d acquired after one of her former employees stole it, and posted them online. He suggested that Baskin’s diary entries showed that she’d killed her former husband, and began a campaign to get her arrested for his death.

As he continued to post videos in which he harassed Baskin, Joe Exotic also changed the name of his zoo to the name of Baskin’s company in an effort to fool her fans. In 2011, Baskin sued Joe for trademark infringement in a $1 million lawsuit.

After this, Joe Exotic declared bankruptcy and turned over the ownership of G.W. Zoo to another big cat lover, Jeff Lowe, who also had a criminal background, including accusations of domestic violence. Although he no longer owned the zoo, Joe Exotic remained on the property and tried to spin his small amount of fame into political capital, running unsuccessful campaigns for president in 2015 and governor of Oklahoma in 2018.

What happened to Joe Exotic?

Joe Exotic’s life began to fall apart after 2015. His husband, Travis Maldonado, fatally shot himself in 2017. As he dealt with grief and financial woes, Joe Exotic remained consumed by his hatred for Baskin. In 2017, he unsuccessfully attempted to have Baskin killed by paying an employee to complete the task; that employee ran off with the money. By this point, the FBI was looking into Joe Exotic for allegedly abusing animals at the zoo. Once federal agents found out he’d tried to have Baskin killed, they sent an undercover agent whom Joe Exotic tried to hire to carry out a second attempt on Baskin’s life.

Joe Exotic was found guilty on 21 counts in 2019, including for plotting to kill Baskin and for killing multiple tigers. In January 2020, he was sentenced to 22 years in prison and is currently being held at Grady County Jail in Oklahoma. He appears to believe Tiger King will vindicate him in some way, according to recent Facebook posts. On Friday, a post from his account read: “Now that the Netflix series is out, I can not watch it, but if you see … the people who set me up … please share this with a law firm that may help me get out of here.”

Baskin, who is still alive, continues to run the big cat sanctuary. In a statement posted to Big Cat Rescue’s website on March 22, Baskin slammed the series as “salacious and sensational” and disputed accusations about her involvement in Don Lewis’s disappearance.

“When the directors of the Netflix documentary Tiger King came to us five years ago they said they wanted to make the big cat version of Blackfish (the documentary that exposed abuse at SeaWorld) that would expose the misery caused by the rampant breeding of big cat cubs for cub petting exploitation and the awful life the cats lead in roadside zoos and back yards if they survive,” Baskin wrote.

The series did none of that, according to Baskin, and instead focused on the suggestion that she had a role in Lewis’s disappearance.

“The series presents this without any regard for the truth or in most cases even giving me an opportunity before publication to rebut the absurd claims,” she wrote. “They did not care about truth. The unsavory lies are better for getting viewers.”

Is it legal to own big cats in the U.S.?

The legality around the ownership of big cats is murky. While the Endangered Species Act bans the possession and purchase of any endangered species of wildlife, human involvement with captive-bred wildlife is not as well-regulated. At least six states, including Oklahoma, allow people to keep big cats as pets. And although 35 states ban having big cats as pets, each one has different exemptions and varying levels of regulation and enforcement. Roadside zoos, like the G.W. Zoo, are relatively common in the U.S., with at least a few hundred set up throughout the country. As Tiger King shows, once a person gets into the universe of big cat ownership, it becomes fairly easy to continue to buy, sell and breed them without catching the attention of law enforcement. 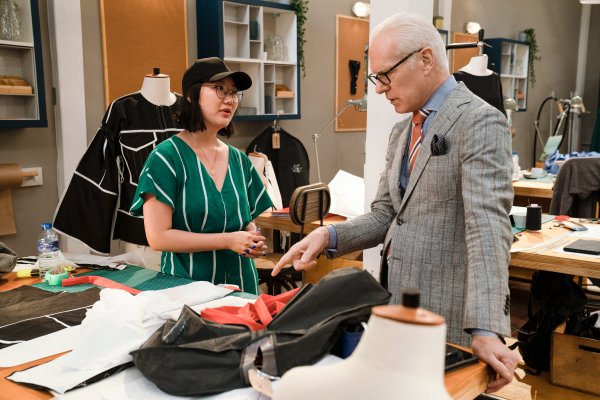 Review: Amazon's 'Making the Cut' Is 'Project Runway' Redux
Next Up: Editor's Pick