If you were to pick one musician to be the face of the fight against climate change, it probably wouldn’t be Lil Dicky. The 31-year-old comedian-rapper has been a lightning rod for criticism; he’s frequently accused of appropriation and tastelessness, including following the release of last year’s “Freaky Friday” featuring Chris Brown. In 2016, he admitted that he was “actively uniformed” about political and social issues.

But on Friday, Lil Dicky will attempt to show a new side of himself with “Earth,” a star-studded ode to our planet that aims to raise awareness and money for environmental causes. The song and animated music video, released three days before Earth Day, feature the vocals of more than 30 A-list stars—including Justin Bieber, Ariana Grande, Snoop Dogg, Sia, Katy Perry, Kevin Hart and the Backstreet Boys—making it something like this generation’s absurdist answer to “We Are the World.”

Lil Dicky, born David Burd, doesn’t profess to be a climate change expert. “I’m still like a peon compared to someone who’s actively informed,” he said in an interview with TIME. “But I’d say I’m maturing, and I’d like to figure out a way to impact humanity as best as I possibly can beyond my typical dick and fart jokes.”

So along with the producer Benny Blanco and the music mogul Scooter Braun, Burd recruited some of the pop world’s biggest names to contribute their vocals for free. The animated music video celebrates various animals around the world; Ariana Grande voices a zebra, for instance, while Halsey voices a lion cub, Ed Sheeran voices a koala, Sia voices a kangaroo and Kevin Hart voices Kanye West (who perhaps thinks of himself as a species of his own.)

A portion of proceeds from the song, video and related merchandise will go toward nonprofits working to find solutions to climate change, including the Quick Response Fund for Nature, the Shark Conservation Fund and the Carbon Cycle Institute. Burd partnered with the Leonardo DiCaprio Foundation to identify the best nonprofits to donate to (DiCaprio also appears in the video as an animated version of himself). Burd hopes that the combination of his sizable own audience—“Freaky Friday” has over 490 million views—with that of each of his guest stars will make “Earth” a unifying and mobilizing force for a movement that has largely lacked a musical anthem.

“I wanted to minimally get people to even consider caring,” Burd said.

While climate change is far from a new issue in music—Marvin Gaye sang about pollution in 1971’s “Mercy Mercy Me”, and Al Gore’s Live Earth featured artists performing in protest across the globe—Burd says the topic is made all the more urgent due to a report from the United Nations that said that major ecological crises could come as early as 2040.

“As activists across the world make their voices heard and inject new life into the environmental movement, we are delighted to be working with Lil Dicky and other collaborating artists to help build even greater support for climate solutions at this critical time,” said Justin Winters, the executive director of the Leonardo DiCaprio Foundation and the One Earth initiative, in a statement.

In an interview, Burd discussed becoming aware of the dire threat that climate change poses and whether he is the right person for the movement to coalesce under.

This feels like a drastically different direction from your previous subject matter. What caused that change?

The idea didn’t start out as this grand thing. It really kind of started out as, “I love animals. I’d love to make a song where different artists play the role of different animals.”

As I started playing with it, I had this very vague understanding that there was an environmental issue on earth. I didn’t know the details, and as I did my research, I was just blown away by the facts at hand. If we don’t completely redefine how we do everything on earth, from an energy perspective, from a food perspective, from a conserving nature perspective, in the next 12 years, the damage is irreversible and we’re screwed. Within our lifetime. What started as a silly joke of an idea along the way became the most important thing I’ll ever do.

How do you hope the song will affect the discourse over climate change?

At the end of the video, I send people to a website I’ve created, called welovetheearth.org. It shows me giving a tutorial about climate change for dummies. Because I am a dummy. I wanted to create an entertaining tutorial where a kid—or an adult—can go and digest interesting content and be aware of how dire the situation is.

Right now I don’t think people care that much. If everyone decided to care just a little bit—if everyone cared enough to not use straws at all—that’s going to have an impact. Somehow, life has led us to this 12-year-window where it’s on the people who are on earth right now to insist that everything finally gets actually taken seriously. What an opportunity.

How are you becoming educated on climate change?

There are many climate change skeptics in the United States, including the president. Are you hoping to change their minds?

I don’t feel like it’s a political issue—I feel like it’s a human issue. But I will say that Trump being president and saying things like, “Global warming’s not even a real thing”—that makes me even more interested in understanding the issue. It’s such a crazy perspective for the leader of the free world to have.

I’m not an environmentalist. I’m not Mr. Facts. But from my limited understanding, I don’t even empathize with the climate deniers’ position. Because 99% of scientists are all saying this one thing.

I’m not trying to convince climate change deniers. What I’m trying to do is expose everyone who hasn’t even taken the time to consider what’s going on so that they actively oppose climate change. Millions of people are going to have to move. They’re going to run out of food. How is this not the only thing everyone is talking about?

I don’t want to be preachy and have any barriers to entry. I wanted to make it a really mainstream entertaining piece of content that gets people to understand the core realities.

You seem pretty self-aware of the fact that many people don’t take you seriously. Did you have any misgivings about becoming a face of the fight against climate change?

This is not something I thought was ever going to happen. But that’s why I kind of feel like I might be a borderline ideal person. This is new to me, just like it’s going to be new to whoever it’s hitting. If I’m ignorant, I’ll use that to help spread it to everyone else who’s also ignorant about it.

Do you expect any criticism from any of your fans who might be right-wing?

You can be a Trump supporter and still understand the value of earth. It’s become a political issue just by design, almost. I think it needs to just be a human issue and a morality issue.

How did you wrangle all of these superstars to be on the song?

It was me, my manager Scooter Braun [who also represents Bieber and Grande] and Benny Blanco, who is a true producer in every sense of the world and the reason this song happened. He is the guy that knows everybody.

We’re all such competitive people that we all kept tabs on who got who. We all had our own relationships, and together, in a three-pronged attack, we got 30 artists.

Who was the most difficult to convince?

There’s a part that I wrote for Kanye. I’m friendly with Kanye—I used to play basketball with him. But I left myself like three days to get Kanye on the phone and couldn’t get in touch with him. He was pretty unreachable; he changed his email and his cell phone. So I reached out to Kevin Hart and asked, “Would you play Kanye?” and he said yes.

Your song “Freaky Friday” received its share of criticism [including for its inclusion of Chris Brown and use of the N-word]. Do you look back on the song with any regret, or take any lessons from the ensuing discourse?

No, I don’t really look back on the song with regret. I feel like I’m a comedian at heart and I think sometimes comedy needs to really push the edge. I feel like I have a good moral compass and that the song and video made people laugh and provided five minutes of joy for a lot of people. I knew the criticism would come along with it, but that’s really to be expected.

Is “Earth” a single on an upcoming album?

There’s an album, but it’s taking me so long. Earth is the second single, after “Freaky Friday.” I’d say I need one or two more songs to feel satisfied with it and feel like it’s my dream album.

It’s really all over the place. It’s definitely not very dramatic or sad. It’s 15 to 17 songs, and every song could have its own video.

When is it coming out? 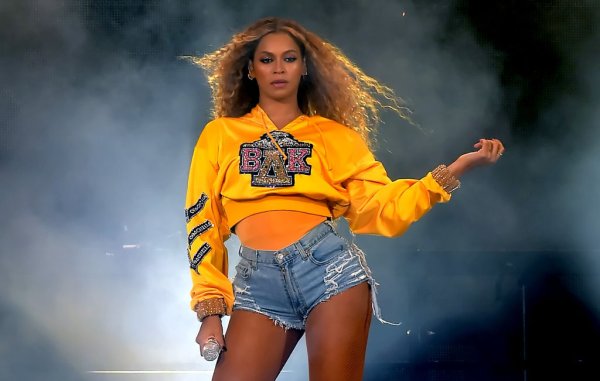 Beyoncé Claims Music's Most Influential Stage for Black Culture in Netflix's Homecoming
Next Up: Editor's Pick