At the 2020 Academy Awards, director Taika Waititi won “Best Adapted Screenplay” for his satirical film Jojo Rabbit, and took the stage to claim his first Oscar. “I dedicate this to all the indigenous kids in the world who want to do art and dance and write stories,” Waititi said, making history as the first person of Māori descent to win the award. “We are the original storytellers, and we can make it here as well.” Waititi ended his speech with a traditional Maori-language phrase expressing goodwill. “Thank you, kia ora.”

But the Oscar winner and Thor: Ragnarok director had a few more choice words to share after his acceptance speech, aimed at the tools on which he created the award-winning screenplay. When asked by Deadline about what writers should be discussing in the upcoming Writer’s Guild of America negotiations, Waititi launched into a humorous rant about what might be considered the most important tool in a writer’s arsenal.

“Apple needs to fix those keyboards,” Waititi responded. “They are impossible to write on. They’ve gotten worse. It makes me want to go back to PCs.”

Waititi continued: “On PC keyboards, the bounce back of your fingers is way better.”

Apple’s latest MacBook keyboards, which use a “butterfly” typing mechanism underneath the keys that reduces the millimeters-short distance traversed when a user presses down, have been derided since their introduction in 2015. Users’ complaints have ranged from a dissatisfying typing experience to unresponsive or duplicating keys, according to articles outlining the issue. Two class action lawsuits have even been filed against the company for its “constant threat of nonresponsive keys and accompanying keyboard failure.”

Waititi went on to take an informal poll from the crowd of reporters. “Hands up if you still use a PC,” he said. “You know what I’m talking about. It’s a way better keyboard. Those Apple keyboards are horrendous. Especially as the laptops get newer and newer … the keyboards are worse.”

The director even cited some physical ailments he believed to be exacerbated by the poor typing experience. “And I’ve got some shoulder problems, [Occupational Overuse Syndrome] — I don’t know what you call it here — which is in that tendon that goes from your forearm to your thumb. You know what I’m talking about,” said Waititi, who then pantomimed typing with cramped hands and hunched shoulders. “When you’re writing … you’re like this. We’ve just got to fix those keyboards, and WGA needs to step in and do something.”

Apple has since revised its keyboard design, though the improved Magic Keyboard is currently available only in its $2,399 16-inch MacBook Pro, released in 2019. TIME has reached out to Apple for comment.

While Waititi’s complaint may have been couched in some lighthearted humor, the problem plaguing Apple’s MacBook keyboards as of late has driven many to commiserate with the director, and raises the issue of ergonomics when writing. Occupational Overuse Syndrome, also known as Repetitive Strain Injury, is caused by prolonged muscle contractions, often due to maintaining the same position for long periods of time. It can lead to tremors, inflamed muscles, and difficulty performing other tasks, like grabbing objects.

“In the last 10 years there have been more and more studies going against the teaching of patients to sit in one exact position like we used to,” says Marianne Ryan PT, a Manhattan-based physical therapist and author of Baby Bod. “The best thing is to have more than one position to be in while sitting for a long period of time.”

The U.S. Occupational Safety and Health Administration (OSHA) recommends that people who use computers on a daily basis maintain a proper ergonomic setup — difficult advice to follow if you’re typing on a laptop with no additional accessories. According to OSHA, musculoskeletal disorders, like those caused by repetitive motion, cost the U.S. an estimated $15 to $20 billion in lost work time and medical claims each year.

“When I wrote my book … I actually had two different laptops that I worked on so I was changing my position and switching what I was doing,” says Ryan, who used a Bluetooth keyboard on a desk she found too uncomfortable to use when writing on her laptop.

For those dealing with muscle pain similar to Waititi’s self-described ailment, Ryan suggests elevating your laptop’s screen with a platform, and pairing it with a Bluetooth keyboard that allows for more freedom of movement and flexibility when repositioning yourself.

While expensive ergonomic keyboards with curved or two-piece designs are also an option, constant use and repetitive actions may still result in strain on the muscles, causing pain. “If he thinks the keyboard is doing it, he might need to get more than one to switch around,” says Ryan. For her patients, she also suggests a series of stretching and strengthening exercises to mitigate the damage done by repetitive actions. “If you’re bending your wrist for periods of time, you should do the opposite with stretching,” says Ryan. “So if you’re bending your wrist down towards the keyboard, what you need to do is take your fingers, bend your whole entire wrist, bending that backwards.”

Ryan also suggests seated back extensions, done by placing your hands behind your neck, spreading your arms wide, and bending backwards in your chair. “So whatever you’re doing for long periods of time, try to do the opposite as your prescribed exercise to break up the excess overuse.” 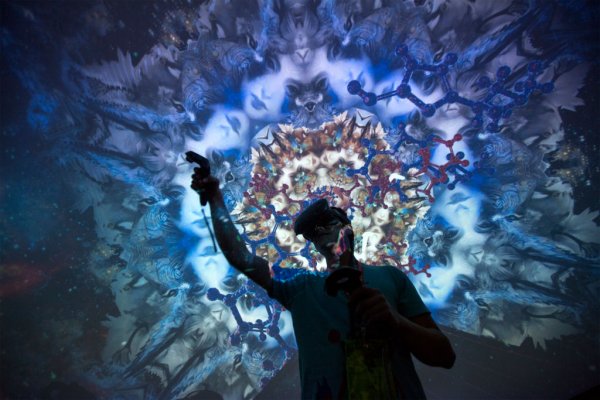 How Artificial Intelligence Could Help Video Gamers Create the Exact Games They Want to Play
Next Up: Editor's Pick