From Love Is Blind to The Circle, Netflix Is Getting Terrifyingly Good at Reality TV

The women of 'Love Is Blind'
Netflix
By Judy Berman

If you plan to take “Netflix and chill” literally this Valentine’s Day, then rejoice, for the platform provides. In the tradition of risible cable reality hits like Married at First Sight and 90 Day Fiancé, its new “social experiment” Love Is Blind follows couples who’ve been thrust on the fast track to marriage. The twist is that they don’t lay eyes on each other until they’re engaged; each “date” consists solely of a chat between one man and one woman lounging in separate “pods.” (As is too often the case with dating shows, logistics exclude same-sex couples from the fantasy.) Debuting Feb. 13 and airing its finale on Feb. 27, and hosted, for some reason, by Jessica Simpson’s ex and former 98 Degree frontman Nick Lachey and his current wife, TV personality Vanessa Lachey, Love Is Blind asks whether singles who aren’t thinking with their libidos might be better equipped to build lasting relationships.

It’s refreshing to watch them bond by comparing values, aspirations, likes, pet peeves and senses of humor, rather than drunkenly sniffing around each other Love Island-style, though the series rushes through early encounters to the extent that I often failed to see how such strong feelings developed between various characters. By episode 3, a critical mass of participants—all of them cute, to everyone’s relief—are affianced and sent on a romantic beach getaway to fine-tune their chemistry. Later, they return to the “real world” to cohabit, in what is easily the most compelling and redeeming stretch of the show. Viewers get to observe how couples who committed in a vacuum, then took off on a premature honeymoon, struggle to blend their lives. A black woman introduces her first white partner to her loved ones and frets that believing in strong black families but marrying outside her race might be hypocritical. Age gaps become a sticking point for some.

What ruins the high-minded premise is an extremely reality-TV finale in which each participant decides at the altar—in painstakingly selected bridal wear and in front of as many friends and family members as they can get to play along with such a crazy scheme on short notice—whether they’re really going to marry a person they’ve only known for five weeks. There are couples to root for, it’s true, some of whom I really grew to like. But more than that, there’s something frantic and sordid and depressing about these pressurized, made-for-TV weddings, even when they go off without a hitch.

Still, I zoomed through the season almost involuntarily, just as I’d done in December with Netflix’s social-media “experiment” The Circle. Over the past year, the service has debuted a number of similarly elaborate, widely discussed reality programs. They aren’t all great (though a few, like hip-hop competition Rhythm + Flow, are actually wonderful). But taken together, they suggest that Netflix is getting quite good at crafting these shows for maximum appeal. And, for better or worse, that evolution is changing the face of reality TV.

Netflix has always been savvy about nonfiction programming. Launched in 2015, its first two original docuseries, Making a Murderer and Chef’s Table, not only furthered the service’s early prestige-TV development strategy, but also became hits. Their respective topics—true crime and food—are still among its most popular nonfiction subgenres.

But it wasn’t until 2018, the year it started firehosing original content, that Netflix entered the reality TV business in earnest. That winter it unveiled Nailed It!, the hilarious contest that has inept yet spirited home bakers replicating the work of professional cake decorators, and a reboot of Bravo’s early-’00s makeover show Queer Eye that compensated for a retrograde premise (gay men are helpers!) with a vibrant new cast. Both have become franchises. Nailed It! begat Nailed It! Holiday, as well as editions from Mexico, France, Spain and Germany. And after putting out four seasons of their flagship series in 16 months, Netflix sent the Queer Eye guys (who also once appeared in a special episode of Nailed It!) to Japan for a miniseries. Now the show’s style expert Tan France hosts Next in Fashion, a Project Runway clone that debuted in January.

In the meantime, presumably as part of an effort to compete with cable as a whole rather than HBO specifically, Netflix has quietly assembled a library of lower-profile original and licensed reality series. Each programming niche loosely corresponds with a cable channel: Docusoaps (Yummy Mummies, Selling Sunset) are Netflix’s answer to Bravo and E!; Stay Here, Interior Design Masters and Instant Hotel are its HGTV. Food Network fans can watch cooking contests (The Great British Baking Show, Sugar Rush), celebrity vehicles (Jon Favreau’s The Chef Show, David Chang’s Breakfast, Lunch and Dinner), food-travel fare (Taco Chronicles, Street Food). VH1 mega-hit RuPaul’s Drag Race isn’t in the catalog, but there’s no shortage of other drag content (Dancing Queen, Dragula, Ru’s scripted series AJ and the Queen). If you liked Bear Grylls’ Man vs. Wild on Discovery, try Bear Grylls’ You vs. Wild on Netflix. The service covers the network reality-show bases, too, with music competition Rhythm + Flow and sleep-deprivation game show Awake. Love Is Blind brings it into the realm of The Bachelor.

Only a handful of these titles have broken through to the cultural conversation, with vocal social-media followings, coverage in mainstream publications or awards recognition. But that’s part of what makes Netflix’s saturation strategy so canny. Sure, subscribers sign up for marquee dramas like The Crown and Stranger Things, but you can’t become a true alternative to cable (or to TV-heavy streaming services such as Hulu and the forthcoming HBO Max and Peacock) if you don’t provide the kind of shows people put on while we’re cooking or cleaning or dozing on the couch.

The cast of 'The Circle'
Mitch Jenkins/Netflix

Not that Netflix’s reality strategy consists solely of photocopying traditional American television. It has also imported international shows such as Japan’s Terrace House franchise—a kinder, less melodramatic spin on The Real World that has become a cult favorite stateside. Every now and then the service even produces a genuinely novel format, like 2019 Valentine’s Day drop Dating Around, an illuminating vérité-style series that sends singles of all ages, identities and sexual orientations on blind dates to unobtrusively observe how connections (and enemies) are made.

Netflix has carved out an especially unique niche in the lifestyle space, transforming successful authors like Samin Nosrat of the fantastic Salt Fat Acid Heat and Marie Kondo, whose show Tidying Up was the service’s most-watched reality debut last year, into TV stars. Though it’s fast and loose with science and plays like it was built to provoke controversy, Gwyneth Paltrow’s Goop Lab falls into the same aspirational category. Which is why it can be troubling to see the vastness of Netflix’s brand blur the line between Goop and the platform’s equally zeitgeisty but more journalistic docuseries, such as the true-crime/cult combo Wild Wild Country and Cheer, a recent original that follows an elite cheerleading squad at a junior college.

On a subtler but diabolically effective level, Netflix has also been tweaking reality-competition conventions that had remained more or less static since Survivor, The Bachelor and, lest we forget, The Apprentice emerged at the dawn of the 21st century. Comforting in their predictability, these franchises got viewers hooked on their repetitive rhythms: every episode began with a challenge or two, followed by a round of blunt judging or strategic voting, culminating in an emotional elimination. Some contests follow the American Idol model, which only diverges from the standard in that it kicks off each season with a look at the open casting process. But even irreverent twists like Drag Race stick to the basic formula.

Netflix’s buzziest new reality games have looser, more mutable formats. The Circle isolates competitors in separate apartments, where they interact solely through the titular social-media platform in a sort of virtual popularity contest. Between eliminations, the show builds suspense into new contestants’ arrivals and the discovery of players who are catfishing (i.e., using profile photos or personalities that don’t reflect their true selves). Rhythm + Flow opens with a series of Idol-esque auditions in various cities, but at each location the hosts visit local music luminaries and explore the history of hip-hop in the region. Different kinds of challenges, from one-on-one rap battles to individual music videos, dictate ever-shifting episode structures. Both shows often close episodes on heart-pounding cliffhangers, saving eliminations and other surprises for early in the next hour. The tactic regularly keeps me watching for much longer than I ever plan to.

Love Is Blind isn’t technically a competition—the only prize is marriage, and the only thing participants stand to lose is, well, every ounce of their personal dignity—but its structure closely resembles those of its immediate predecessors. Instead of a set episode format, the show has multi-episode phases: pods, then beach, then cohabitation, then the weddings, one of which stretches from the penultimate installment into the finale. As in Rhythm + Flow and The Circle, the characters read as real, flawed but mostly sympathetic people, rather than the glossy archetypes of The Bachelor, the glittery soap-opera improvisers of the Real Housewives franchise or the ubiquitous thinly disguised actors hoping to use reality TV as springboard to fame.

That authenticity makes the stories on Love Is Blind more absorbing for those of us who’ve been bored of reality caricatures for upwards of a decade. Yet it also heightens the cruelty of putting people who, by all appearances, are only searching for love through the emotional ringer in the name of entertainment. The happy endings are presumably supposed to temper the cruelty of the manufactured jiltings, leaving uplifted viewers with the impression that each relationship played out just as fate intended. Instead, I came out as furious as the fiancés who got dumped—and equally convinced that I’d been manipulated.

It dawned me that my favorite characters in Netflix reality shows were coming out on top—in Rhythm + Flow, The Circle, and, finally, no spoilers, Love Is Blind—with a frequency that couldn’t be purely coincidental. If Project Runway can be an exercise in frustration with the judges’ often-mystifying decisions, Next in Fashion felt suspiciously frictionless. Crafty editing is a well-established staple of reality TV, but the extent to which these series’ producers were able to get inside my head and tell me who to root for felt eerie. While I doubt that many of us have noble reasons for watching many reality shows, in this era of fake news and media bubbles, there’s something especially unsettling about programs that seem so adept at confirming biases.

And yet, I’m sure I will dive right into whatever “experiment” the streamer cooks up next, out of curiosity about the premise that will almost certainly curdle into a compulsion to see what happens to characters I’ll inevitably have grown to like. More than great shows or awful ones, Netflix’s expanding reality empire is built on a foundation of viewers’ most addictive impulses—ones the company understands far better than its rivals on cable. Love may be blind, but the algorithm sure isn’t. 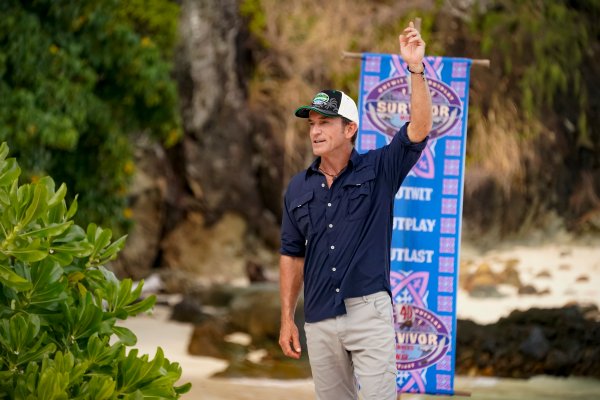 Survivor's New Season Brings Back Many of the Show's Most Influential Winners. Where Is Original Champion Richard Hatch?
Next Up: Editor's Pick