Whether You Loved Emily in Paris or Hated It, Dash & Lily Is Your Next Escapist Netflix Binge

Confession: I couldn’t get through Emily in Paris. Yes, I knew the comedy from Sex and the City creator Darren Star was meant to be nothing more than a sugary confection—a Ladurée macaron to Carrie Bradshaw’s Magnolia cupcake. And I’d never begrudge its fans their treat. Escapism is a very personal thing. Some of us relax by watching superheroes fight evil; others prefer raunchy humor or cooking competitions or high-end lifestyle porn. I can only speak for myself when I say that I gave up on Emily because its vision of a pushy, ignorant yet beautiful American girl navigating the culture shock of the French workplace while diligently growing her Instagram following only grated on me. I was not rooting for her, nor did I find her dated internal struggles over sex, feminism and fragrance marketing compelling. Star has never been a convincing writer of female characters as far as I’m concerned, and Emily struck me as his flattest, least enthralling effort to date. It was disappointing, because I could’ve used a fun, frivolous, pre-election, mid-lockdown comfort watch last month.

Which is why I’m ecstatic to have finally found an Emily in Paris of my own, and on Netflix no less. I want to shout its title from the rooftops: Dash & Lily! Adapted from the YA book series Dash & Lily’s Book of Dares by Rachel Cohn and David Levithan—the co-authors of millennial rom-com touchstone Nick and Norah’s Infinite Playlist—this Gen Z teen romance is set during the holiday season in New York City. A scowling, persnickety Holden Caulfield type who hates Christmas because his divorced parents treat him as an afterthought, Dash (Austin Abrams of Euphoria) finds a mysterious red journal shelved in the Salinger section of Manhattan’s famous Strand Bookstore. The notebook contains clues to tracking down an equally bookish girl who might be his soulmate: upbeat outcast Lily (Good Boys’ Midori Francis), who loves her big, multiethnic family’s Christmas celebrations. But first, each is going to have to prove to the other that it’s worth meeting.

The refreshingly lo-fi courtship takes the form of a series of city-spanning dares, which each must complete in order to find the next notebook drop-off location. Grinchy Dash has to sit on the lap of a department-store Santa; overprotected Lily must venture to an empty Grand Central before the first train of the day arrives to experience the terminal’s pre-dawn beauty. (“People ruin everything,” he explains.) We get to know them as they get to know each other. After they’re abruptly deserted for the holidays by their elders, Lily’s nonexistent love life becomes a project for her brother Langston (Troy Iwata) and his new boyfriend (Diego Guevara). For his part, Dash finds an accomplice in his patient best friend Boomer (Dante Brown). Other obstacles emerge in the form of meddlesome families and competing love interests. Dash carries a torch for his hot, wise ex-girlfriend Sofia (Keana Marie), someone he could always lean on in awkward social situations. All of the traditional rom-com marks are hit—and many unnecessary but inoffensive rom-com references, from Notting Hill to Say Anything, are made.

With its predictable arc and predilection for absurd coincidences, the show could easily cross over from comfortingly familiar to straight-up hacky. What keeps it on the right side of the line, for me at least, is the liveliness and authenticity of its contemporary New York. (Viewers with an emotional connection to Christmastime in the city should brace for the bittersweet experience of revisiting a landscape that will be impossible to recreate in 2020.) This is a city of hybrid identities, where many people gather holiday rituals, magpie-like, rather than confining themselves to the traditions of one family or religion. Hence the multicultural crowd at an unlikely but by no means impossible Hanukkah punk show in the basement of a knish shop. It’s a place where people from similar backgrounds can lead totally divergent lives; Lily’s Asian-American grandfather (James Saito) is an old-school disciplinarian, while her Asian-American great aunt (Jodi Long, having so much fun) is a flamboyant theatre type. Less aspirationally, without indulging in the rich-kid nihilism of Gossip Girl, the show also acknowledges that it’s an economically polarized city, where spacious apartments must be accounted for by characters’ wealth or inherited real estate.

Creator Joe Tracz (A Series of Unfortunate Events) has said that the book “inspired a pledge in our first script: ‘We’re gonna be sticklers for New York geography.’” Dash & Lily goes far beyond that commitment to accuracy, trading in the generic rom-com Manhattan of horse-drawn carriage for the extremely specific New York occupied by two idiosyncratic teenagers. There’s pizza and video rentals at Two Boots in the East Village, pie at Four & Twenty Blackbirds in Gowanus, a jaunt to the Theatre Development Fund’s costume rental outpost in Astoria. Instead of the Rockettes at Radio City, there are the over-the-top Christmas decorations that adorn homes in Brooklyn’s semi-suburban Dyker Heights neighborhood. While you’re likely to find most of these places in any halfway decent guidebook, the fact that you rarely see them depicted in small-screen love stories gives this one a unique vitality. The show’s charm will inevitably elude some viewers. But those who failed to find comfort in Emily’s Paris—or are already thirsty for the next dose of escapism—just might track it down in Dash and Lily’s New York. 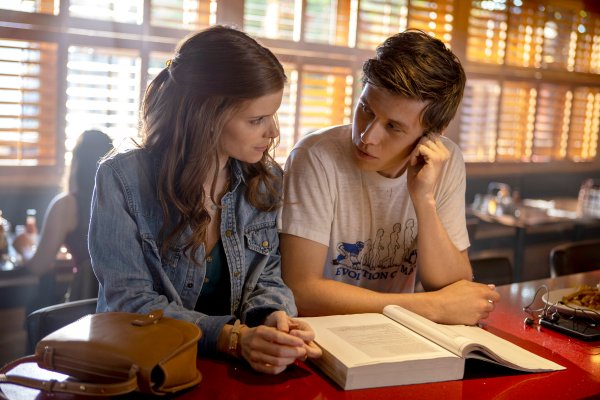 A Teacher’s Thorny Tale of Gender, Power and Consent Will Lodge Itself in Your Mind and Stay There
Next Up: Editor's Pick