Last year, we put five survivors of the massacre at Marjory Stoneman Douglas High School in Parkland, Fla., on the cover of TIME, with the word ENOUGH emblazoned across the image. Determining the cover is always a team discussion, and in the course of it, some in our newsroom urged that we not use that word. How to determine what exactly is enough? Wasn’t it enough at Columbine? At Virginia Tech? At Fort Hood? Won’t it be enough when, sure as night follows day, the next massacre occurs?

We all have our measures of how obscenely normalized domestic terror has become. At TIME, one is how frequently we have felt compelled to devote our cover to the subject. In my own less than two years in this job, we’ve run seven of them, from the 2017 massacre at a Las Vegas music festival that killed 58 people to this spring’s murder of 50 worshippers at mosques in Christchurch, New Zealand.

In recent days, as the heartbreaking news from Gilroy to El Paso to Dayton swept across America, I thought about these covers as well as the hundreds of images from mass shootings we’ve published over the years. Terrified children who survived Sandy Hook walking single file to safety. Giant photographs of the dead at the prayer vigil for the victims at Emanuel African Methodist Episcopal Church in Charleston. The side-by-side graves of two brothers killed, among 11 altogether, at the Tree of Life synagogue in Pittsburgh. Searing images and yet somehow forgotten by leaders with the power to effect change.

But as the week went on, what seemed to me to travel the farthest and speak the loudest were not pictures but numbers. Numbers that showed how tragically exceptional America is in its gun violence. Numbers making clear that rates of mental illness and video-game consumption in the U.S. are similar to those of countries that don’t experience routine mass murder. Numbers revealing just how many civilian firearms are already in circulation in America: 265 million.

Another number: this week’s cover, by artist John Mavroudis, lists the locations of 253 mass shootings in America so far this year. This list, tallied by the Gun Violence Archive, of incidents in which at least four people other than the shooter were injured or killed is a reminder that the toll of gun violence is even greater than the public attacks we typically think of as mass shootings.

I grew up in a family of gun owners and have always used them responsibly. But it shouldn’t be easier to own and use a gun than to own and drive a car. Why should gun manufacturers be shielded from liability that incentivizes nearly every other manufacturer of consumer products in America to think about safety? Retailers can follow the lead of companies like Dick’s Sporting Goods, which ended sales of assault-style weapons after the Parkland massacre. Simple safety technology, the kind that powers smart homes, cars and phones, can also be applied to guns.

Aryam Guerrero, who lost her brother Juan Ramon at the Pulse nightclub in Orlando in 2016, told my colleague Melissa Chan this week that she has become numb to the constant threat. “I just live my life as if I could die in the next 30 minutes,” Guerrero said. “You have no choice but to live with it.”

We do have a choice as a society. Not a perfect choice. Or a guaranteed solution. But doing nothing in the face of repeated mass murder in our society is indefensible.

More than 250 mass shootings in the first 220 days of 2019 alone, it’s hard to believe that this doesn’t go without saying.

People pray and pay their respects at the makeshift memorial for victims of the shooting that left a total of 22 people dead at the Cielo Vista Mall WalMart (background) in El Paso, Texas, on August 6, 2019.
Mark Ralson—AFP/Getty Images
More Must-Read Stories From TIME 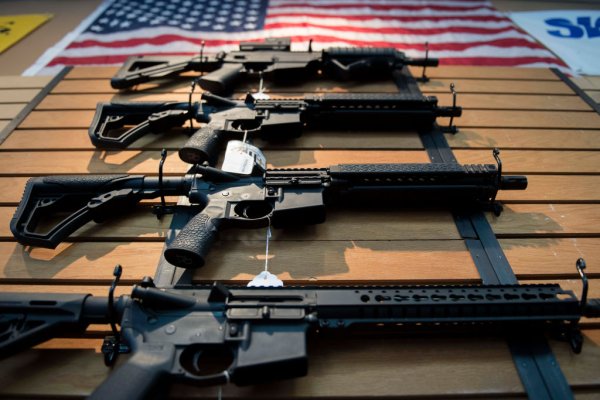