Bethane Middleton-Brown knows the pain the families and victims in Sunday’s mass shooting at a Texas church are feeling all too well. In June 2015, her sister, Rev. DePayne Middleton, was among the nine parishioners killed by a self-proclaimed white supremacist who had been welcomed at a Wednesday night Bible study class at Charleston’s Emanuel A.M.E. Church.

In the wake of the tragedy at the First Baptist Church of Sutherland Springs, Texas, where 26 people — including 8 members of one family and children as young as 18-months-old — were killed by a shooter during Sunday services, Middleton-Brown has offered heartfelt prayer for the victims and their families in a statement to TIME.

“It is a horrific tragedy that continues to lurk its ugly face at the world, but I believe this too shall pass,” she said. “The families will feel the wrath of pain and the sinful ways of this old world and in time they will learn just as I have how to find a balance because the pain won’t go away, but you can live through it.”

There have been numerous mass shootings since a gunman opened fire on the gathered group in the Emanuel church basement. In the time since, the families have grown all too familiar with the cycle — and in turn they, like the families of the Sandy Hook massacre and countless other tragedies, have become de-facto experts on grief and tragedy. Members of the media often call on them to offer thoughts and prayers and help for others who now find themselves members of an increasingly non-exclusive club they never imagined they’d be forced to join. It’s a responsibility they carry on top of the heavy burden of grief.

In her prayer, Middleton prayed that the families find the same “patience, guidance and strength” she and the rest of DePayne’s family have had to find for themselves.

“May they all be guided by God through the spirit of their beloveds,” she said. “I will carry their pain and burden in my heart because it’s just simply too great of a burden to bear alone. I pray for healing.”

Middleton-Brown, who stepped up to take care of her sister’s children in the wake of the Emanuel A.M.E. Church massacre was not the only family member to speak out. Chris Singleton, the son of Sharonda Coleman-Singleton, expressed his grief in a series of tweets on Sunday. “The Lord blessed us with free will and at times like these I am destroyed by the things people do with it,” he said in one message.

Singleton was one of the many Charleston family members who spoke out in forgiveness of his mother’s killer shortly after the shooting took place. At the time, he said, “love is always stronger than hate, If we just love the way my mom would, then the hate won’t be nearly as strong as the love is.” In a recent interview with USA Today, Singleton said he formed his own relationship with God in the wake of his mother’s death. For a while, he told the paper, he’d call his mom’s old cellphone just to hear her voice. He stopped about a year ago when a person answered — his mother’s number was taken.

“Now, I have this video of my mom praying on my phone, at a funeral service of her friend’s dad,” he told USA Today. “She was ironically talking about how you get through that stuff. So I listen to that. It helps me get through tough times.’’

Malcolm Graham, a former North Carolina state senator and the brother of Cynthia Hurd, another of the Emanuel A.M.E. victims, says during a different time, before Emanuel, the bulk of the calls he received related to politics. Now, he says, whenever there’s a shooting his phone is ringing.

The frequency of mass shootings in America has made healing all the more difficult, he says. A month after his sister and eight others were killed, there was another shooting at a military recruitment station in Tennessee. A few months later in October, a shooting on a community college campus in Oregon. And then in December, the terrorist-linked mass shooting in San Bernardino, Calif. So, too, has the familiar set of events that unfold after each shooting — the rush of coverage followed by a lull until the next tragedy. And, he says, the lack of action from lawmakers.

“I think policy makers need to stop saying their thoughts and prayers are with the families. The folks in Charleston, the folks that died yesterday were in the church. These are prayed up folks. They were worshiping their God,” he says. “What they ought to do is get to work addressing these issues that affecting our country.”

He’s calling on lawmakers to address what he calls “common sense” gun safety measures, including limits on the types of weapons people can buy, how many rounds the guns can shoot, background checks and resources for mental health needs. His message to the Texas families and community members, in the meantime, is to “be strong.”

“Something that we learned when I was pledging a fraternity is this quote. It’s something that I had to repeat over and over to myself when Cynthia passed,” he says. “It says, ‘Be strong, we’re not hear to play, dream or drift, we have hard work to do and heavy loads to lift. Shun not the struggle for it’s God’s gift — be strong.'”

“Encourage the families in Texas to be strong,” he says. ” To the faith leaders in that community, I would just encourage them to be strong and to demonstrate their faith. But also like James Chapter 2 says, ‘Faith without works is dead.’ They also have work that they have to do to help this country face some troubling issues.” 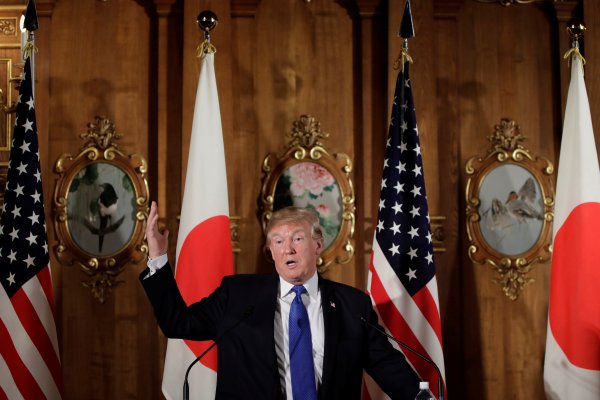 Trump Says Texas Church Massacre Not a 'Guns Situation'
Next Up: Editor's Pick