'Good Guys With Guns' Can Rarely Stop Mass Shootings, and Texas and Ohio Show Why

By Mahita Gajanan and Sanya Mansoor

The gunman who opened fire in Dayton, Ohio early Sunday killed nine people and wounded 14 in just 32 seconds before police responded and took him down.

Dayton, along with the shooting at an El Paso, Texas Walmart the day before, are the most recent mass shootings that show how, despite the presence of trained officers and armed civilians—the people the National Rifle Association would call “good guys with guns”—gunmen can inflict horrific casualty counts within seconds, before anyone can respond. Experts on violent crime say such incidents make clear that despite the NRA’s post-Sandy Hook justification, relaxing gun laws to let more people to arm themselves has done nothing to prevent mass shootings.

But it’s an experiment that has played out across the United States at the cost of hundreds of lives.

The notion that a “good guy with a gun” can prevent a mass shooting gained traction after the 2012 shooting at Sandy Hook Elementary School in Newtown, Conn., when NRA then-Executive Vice President Wayne LaPierre said, “the only way to stop a bad guy with a gun is a good guy with a gun” during a defiant press conference amid rising calls for gun control. Many states have taken that advice to heart in the years since. In states where Republicans have control, laws that loosen gun restrictions increased by 75% in the wake of mass shootings, according to a 2019 Harvard Business School report.

Nearly every state implemented new gun laws after the Sandy Hook shooting, with about two-thirds enacting laws that made access to guns easier and gave more rights to gun owners, the New York Times reported in 2013.

Texas––which has long had permissive laws on guns––was among the states that expanded gun rights, by reducing safety training requirements to apply for concealed-carry permits. During its 2019 session alone, the state legislature passed 10 laws making it easier for gun owners to keep and carry their weapons. The laws, which take effect Sept. 1, will, among other things, let Texans carry guns in places of worship and prohibit schools from barring licensed gun owners from bringing their weapons onto school property, so long as they are kept in a locked vehicle.

Similarly, Ohio has also expanded rights for gun owners since the Sandy Hook shooting. In 2017, Ohio lawmakers passed a law that allows people with concealed-carry weapons permits to bring firearms into day care centers and onto private planes and lets employees bring guns to their company parking lots.

“The logic seems to be to arm people so that people can stop mass shooters,” Chris Poliquin, a professor at the Anderson School of Management at the University of California, Los Angeles, and one of the Harvard report’s authors, tells TIME.

While mass shootings have not increased in frequency since 2012, they have become deadlier, according to a 2017 analysis by Politico. Five of the 10 deadliest mass shootings in U.S. history have occurred since Sandy Hook (El Paso ranks no. 7). These include the two deadliest attacks––the October 2017 shooting in Las Vegas where 58 people were killed and more than 500 injured, and the June 2016 shooting at the Pulse nightclub in Orlando, where 49 were killed and more than 50 injured.

“The weaponry he had was so dangerous,” says Donohue. “Allowing citizens to continually be able to ratchet up the fire power available to them is really unwise policy.”

In Dayton, police were already nearby when the gunman, armed with an AR-15-style assault rifle fitted with a 100-round drum magazine opened fire. He fired at least 41 times in the seconds it took for six officers to respond and kill him.

And in El Paso, police were able to respond to the situation within six minutes, though by that point, the gunman had stopped shooting and left the scene—leaving 22 people dead.

In Gilroy, Calif., where three people were killed in a mass shooting the week before the shootings in El Paso and Dayton, police were on the scene in under a minute.

These incidents show that while police or other armed response can end a rampage and save lives, authorities typically can’t respond fast enough to prevent an active shooter entirely––and the death tolls add up in seconds.

“It really is unbelievably lucky how effective the police response was in these recent mass shootings,” Donohue says. “And there were probably loads of people carrying weapons around and they did nothing. You can’t expect them to.”

There was at least one armed citizen at Cielo Vista Mall near the Walmart in El Paso during the shooting. Army Pfc. Glendon Oakley said in interviews that he was carrying a licensed handgun and drew it when he heard the gunshots on Saturday. “That’s what you do,” he told the military publication Task & Purpose. “You pull your gun, you find cover and you figure out what to do next.”

But, he said he didn’t see the shooter and so instead focused on rescuing as many children as he could in the immediate aftermath of the shooting. “I was just focused on the kids, I wasn’t really worried about myself. So just put my head down and just ran as fast as I could,” he told CNN. “They were anxious, when they were in my arms, they were trying to jump out of my arms but trying to keep them as tight as possible. They are kids, so they don’t understand what is going on.”

It’s rare to find instances of armed civilians responding to mass shooters in public spaces, even when they have the legal right to carry weapons––like most residents of Texas and Ohio do. Typically, mass shootings occur in crowded, populated areas—and people never respond exactly how they might imagine they’d react, says Joe Hendry, director of risk assessments and a national trainer at the ALICE Training Institute, which focuses on response strategies to shootings.

“Carrying a concealed weapon is basically for the defense of yourself. It’s a whole different level of training and expertise to defend others,” he tells TIME.

Even law enforcement officers, who receive training to respond to mass shootings, often don’t react as expected. For one thing, police usually respond to shootings once they are already underway—whether they appear on the scene within a few seconds or several minutes, the damage has already been done. According to Hendry, only about one in five rounds fired by officers responding to shootings hit their targets.

“It’s a very difficult thing to shoot in a room that’s full of people, while someone is shooting at you,” he says.

And even with the proper training and being in the right place, armed citizens cannot always stop a shooter before the assailant opens fire.

Off-duty Border Patrol agent Jonathan Morales was hailed as a hero for pulling his concealed gun and responding to a gunman who entered the Chabad of Poway Synagogue in Southern California in April.

“It happened so fast, literally within seconds,” Morales tells TIME. “With our police training and shooting scenarios, you already know what to expect.”

The shooter opened fire, killing worshiper Lori Gilbert-Kaye and wounding two others. Army veteran Oscar Stewart, who was not armed, chased the gunman out of the synagogue while shouting at him. As the shooter got into his car to flee, Stewart wrestled his weapon away from him.

That’s when Morales fired four bullets into the car.

Morales says he remembers aiming at the attacker on the street, but a woman walked in front of him and he held his fire, worried he could end up hitting an innocent bystander.

“Unfortunately, by the time I was able to take my clear shot, he was already getting into his vehicle. I was still far away—about 20 yards,” he says.

The original version of this story misstated Glendon Oakley’s location during the Aug. 3 shooting in El Paso, Texas. He was at the nearby Cielo Vista Mall, not at Walmart. 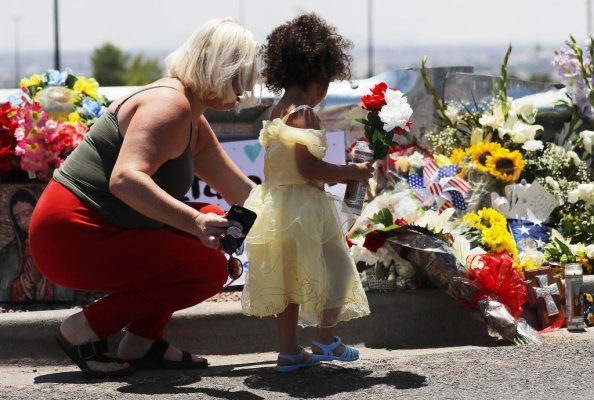 'Your Heart Is Bleeding in Every New Shooting.' Once Again, Families of Mass Shooting Victims Relive the Grief
Next Up: Editor's Pick