It was just 32 seconds from the first shot to the last shot. In that time, a 24-year-old gunman with an AR-15-style assault rifle and a 100-round drum magazine was able to kill nine people and wound 27 others on a crowded street in Dayton, Ohio early Sunday.

In that time, six Dayton police officers were able to respond and open fire, killing the shooter as he tried to enter a packed bar.

On Monday morning, Dayton Police Chief Richard Biehl declined to comment on what might have prompted the mass shooting, citing the continued investigation, but said that as of now, “we are not seeing any indication of race being a motive.” Authorities also confirmed that 11 victims remained hospitalized.

At a Tuesday press conference, Biehl announced that evidence obtained on the shooter revealed he had possible violent ideologies.

“The materials reviewed thus far reveal that the individual had a history of obsession with violent ideations, which include mass shootings and expressed a desire to commit a mass shooting.” Biehl said.

The chief also announced that the FBI would be joining the investigation and focus on the shooter’s motives and whether he had any help.

“This community and our country deserves an answer as to why this happened,” FBI Special Agent Todd Wickerham said at the press conference.

On Sunday evening, Dayton Police released a surveillance video from the city’s Oregon District that included an audio recording and a clock showing the exact time the first shot rang out––1:05:35 a.m. It also registered the last shot, as the gunman was brought down by police, at 1:06:07 a.m.

Dozens of shots can be heard, including a cacophony of gunfire at the end as police office engaged the gunman. Biehl said Monday that police had recovered at least 41 spent casings fired by the gunman. Police fired 65 times.

Footage released by Dayton police shows people racing away from the shooting in the area’s popular Oregon District, which at the time of the shooting was teeming with people who were about to wrap up their nights as bars prepared to close. It also shows the shooter, wearing a mask and ballistic armor and carrying a black rifle, running toward the entrance of Ned Peppers, a bar where numerous people had taken refuge as they fled the gunfire.

In one video, the gunman can be seen collapsing at the doorstep of the bar.

“Had this individual made it through the doorway of Ned Peppers with that level of weaponry, there would have catastrophic injuries and loss of life,” Biehl said Sunday.

Ohio Rep. Mike Turner credited the Dayton police presence for safeguarding his own daughter’s life. “It is extraordinary they were able to respond so quickly. As a result of the police’s action my daughter and hundreds of others who were down in the Oregon District last night are alive,” he said.

The tragedy came less than 24 hours after a horrific shooting at a Walmart in El Paso, Texas, on Saturday. Twenty-two people were killed in that rampage and more than two dozen injured, while a 21-year-old man was taken into police custody.

In Ohio, residents are reeling from a violent attack that struck the city in the early hours of Sunday morning, while across the U.S., people are struggling to come to terms with the news of the two separate incidents that have left nearly 30 people dead.

Here’s what to know about the attacks in Dayton, Ohio last night:

What happened in the Dayton shooting?

A suspect wearing body armor and a mask and carrying an AR-15-style .223-caliber assault rifle with 100-round drum magazines opened fire Sunday morning in Dayton’s historic Oregon District, a neighborhood with diverse nightlife locations, including theaters, bars and restaurants.

In 30 seconds, it was all over, with nine people fatally shot, and the suspect killed by police before he could inflict even more horrific casualties.

Biehl said the suspect parked his car and walked a short distance to East 5th Street, where he emerged from an alley and began shooting. His sister was among the first victims he killed.

As he made his way down the street toward Ned Peppers, he was confronted by six Dayton officers. Biehl said that police are usually posted in the area because it is a popular nightlife spot. The officers heard gunfire and saw a crowd of people running away from the area.

Speaking at a press conference shortly after President Trump addressed the nation about the Dayton and El Paso shootings Monday morning, Biehl further revealed that the shooter had approximately 250 rounds of ammunition in his possession.

When asked how he feels about “the acquisition” of the shooter’s firearm and citizens owning such large magazines, Biehl responded, “It’s problematic. It is fundamentally problematic to have that level of weaponry in a civilian environment.

What do we know about the victims of the Dayton shooting?

On Sunday afternoon, authorities revealed that among the victims was the gunman’s sister, Megan Betts.

Police also released the full list of those fatally shot in Sunday morning’s murderous rampage. Those victims cut across gender, age and racial divides. They are:

Twenty-seven others were admitted to area hospitals following the attack. On Monday morning, authorities confirmed that 11 victims remained hospitalized, and noted that overall at least 14 victims were injured by gunshot wounds.

On Friday, the Montgomery County coroner’s office said all the victims except for one received multiple gunshot wounds.

How to help the victims

The Dayton Foundation, the region’s largest community foundation, has set up The Dayton Oregon District Fund to assist victims and family members of those impacted by the tragedy.

“We awoke on Sunday, August 4 to the terrible news about the Oregon District shooting. El Paso yesterday and Dayton today. Our hearts and prayers are with the families and friends of the victims as well as our entire region, and we are working with the City of Dayton to help in any way that we can,” the foundation wrote on the donation page.

Dayton Mayor Nan Whaley and Ohio U.S. Rep Tim Ryan, who is also a Democratic candidate for president, both encouraged people via Twitter to donate to the fund.

What do we know about the shooter?

Connor Betts, a 24-year-old white man, was identified as the shooter, according to Dayton Police Lt. Col. Matt Carper. Betts was wearing body armor and used a .223-caliber AR-15-style long rifle with a 100-round drum magazine and extra magazines to kill nine people in less than a minute, authorities said.

Police were nearby and responded by fatally shooting him. Authorities have said that dozens of rounds were fired in the incident.

The police noted that nothing in the suspect’s record would have precluded him from purchasing such firearms.

What have been the responses?

The Dayton Police Department, assisted by a detachment from the FBI, have been investigating the shooting.

“Dayton has been through a lot already this year, and I continue to be amazed by the grit and resiliency of our community,” Whaley said. In May, the Dayton area was pummeled by a series of tornadoes, as well as a the threat of a KKK rally that ultimately attracted only nine people.

The city held an evening vigil on Sunday for the victims and their families.

At a news conference on Sunday afternoon, local and national politicians from Ohio expressed their grief and outrage, as well as their gratitude to Dayton’s first responders.

Ohio Sen. Sherrod Brown commended local police and other first responders, and said that more needed to be done. “My first response of course is sadness in hearts and prayers and thoughts for families and the community overall including police and fire,” said Brown. “My next thought was anger at our country and society and our Congress for not doing anything about this.”

Across the political spectrum, support has poured in for the devastated Ohio community.

Whaley said that her office has been in touch with the White House.

Massachusetts Sen. Elizabeth Warren, a frontrunner for the 2020 Democratic nomination, tweeted in response to the shootings as well.

“I’m heartsick for the 29 people killed this weekend in El Paso and Dayton—and all the other lives we lose every day due to senseless gun violence,” Warren wrote. “We need to take urgent action to end the gun violence epidemic.”

“Every time this happens we say ‘never again,'” said South Bend, Indiana Mayor Pete Buttigieg on CNN’s State of the Union Sunday morning. “I’m wondering what it will take to get the sense of urgency to get Washington to actually respond.”

“Dayton has gone through a really tough year,” sad Mayor Whaley on Sunday morning, mentioning the tornadoes that hit the city in May. “One seems completely preventable. I just question, ‘when is enough enough?’”

Write to Alejandro de la Garza at alejandro.delagarza@time.com and Michael Zennie at michael.zennie@time.com. 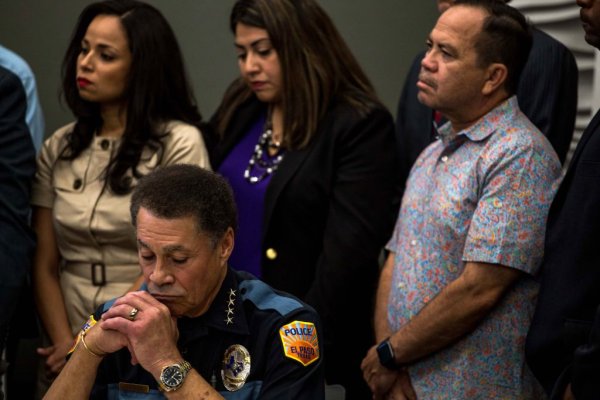 What We Know About the El Paso Shooting Hate Crime Investigation
Next Up: Editor's Pick