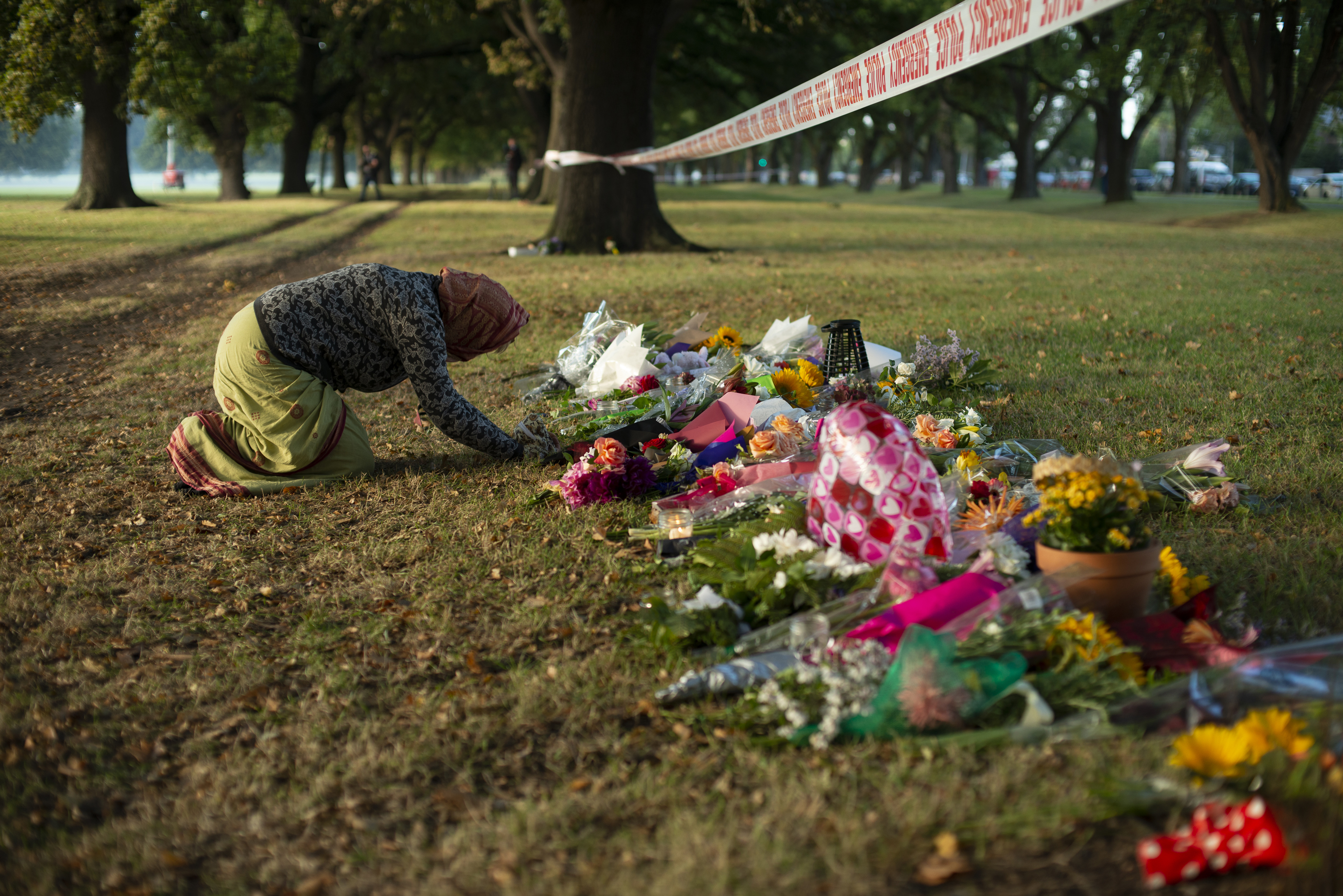 A visitor outside the Masjid Al Noor Mosque memorial site in Hagley Park, where one of the two mass shootings occurred, Christchurch, New Zealand, March 17, 2019.
Virginia Woods-Jack for TIME

In the Wake of Tragedy in Christchurch, Love Prevails

By Charlie Campbell | Photographs by Virginia Woods-Jack for TIME

Every school kid in Christchurch descended on the city’s Al Noor mosque after class on Monday, bringing flowers, teddy bears and messages of love on paper chains, while linking arms to sing traditional Maori songs in tribute to the 50 dead and 34 wounded in Friday’s terrorist attack.

The moving scenes typified the stirring response “the Garden City” has embraced following the attacks on its Muslim community, which began with the slaying of 43 worshippers at Al Noor mosque, and continued with seven more murders at the Linwood mosque across the city. One of the victims of the rampage, which was wrought by a lone gunman armed with assault rifles and broadcast live on social media, died at Christchurch Hospital.

“The community here is very close,” says dad-of-two Asif Ahmed, 42, who moved to New Zealand from Bangladesh five years ago and lost several close friends in the attack. “New Zealand is a very good, peaceful country. Everyone has been calling to ask how I feel, can they help, so the friendship here is very strong.”

Brenton Harrison Tarrant, 28, of Grafton, Australia, appeared in court Saturday morning charged with murder, was remanded without bail and will next appear in court in April. Tarrant, an avowed white supremacist, had an ordinary gun license from 2017 and was able to purchase five firearms despite a brazenly xenophobic social media presence.

A police officer stands guard in front of the Masjid Al Noor mosque on March 18, 2019 in Christchurch, New Zealand, where one of the two mass shootings occurred on March 15, 2019.
Virginia Woods-Jack for TIME

Change is already on the horizon after the country’s worst ever massacre. Following a cabinet meeting about gun laws on Monday, Prime Minister Jacinda Ardern said that within 10 days of the attack, “we will have announced reforms which will, I believe, make our community safer.”

Christchurch Mayor Lianne Dalziel says she’s taken pride in how both the nation and the city have responded to the tragedy. Orthodox Jews, Hindus, Christians and Sikhs have all rallied around to help survivors and victims’ families.

“I have friends in the Muslim community, and they’ve reached out and talked me through some of the pain that’s being felt at the moment,” Dalziel tells TIME in an interview. “But they are also telling me that they’re feeling the love and support of their city and country.”

Dalziel was an MP on Feb 22, 2011, when a 6.2 magnitude earthquake convulsed New Zealand’s second city, killing 185 and toppling many downtown buildings. She says she decided to run for local office precisely because of the “need for a particular approach to recovery after a disaster.”

Still, Friday’s events were far from any tragedy she ever envisaged might be inflicted on this isolated nation of five million in the South Pacific, which constantly ranks as one of the world’s safest.

“Would I have ever have imaged a terror attack on our own city?” she asks. “No, that would have been so far from my mind. I wouldn’t have mentioned it as a possibility.”

Mohsan Ali, 37, narrowly escaped the attack on the Al Noor mosque in Christchurch, New Zealand. His wife survived by hiding in a bathroom.
Virginia Woods-Jack for TIME

More tales of heroism have emerged from Friday’s carnage. Haji-Daoud Nabi, 71, had escaped the Al Noor mosque and was helping people jump over a rear fence when he heard a pause in the shooting. He went back inside to help more people escape, but tragically the gunman was only reloading.

“The gunman came back with another round of fire, so my father jumped on a Fijian boy to save him and got hit,” Nabi’s son, a 43-year-old auto repairman Omar, tells TIME.

“He saved the younger soul, for his own soul, knowing that if he died, the gates of paradise are open for him. He did not care; he’s 71 years old, he’s not going to run. Other people aren’t used to gunfire, my father is.”

Nabi came to Christchurch from Afghanistan in 1986, founded the city’s first mosque on Tuam Street, and helped secure the replacement site for Al Noor after that building was sold. An engineer by trade, his is a typical immigrant story here — one of so many intertwined with the history of this leafy city of 400,000.

“We’ve been utterly dependent on people coming from outside and we’ll continue to be so,” says Dalziel. “I conduct a citizenship ceremony every month; it’s usually about 180 people. Each person in the ceremony becomes a citizen of our city, of our country.”

A New Zealand flag stand amidst the tributes to the shooting victims in Christchurch.
Virginia Woods-Jack for TIME

Dalziel also warns against a rising tide of intolerance that has infected political discourse across Western society. In the U.S., for one, President Donald Trump has warned of an “invasion” of immigrants crossing America’s border with Mexico. Asked whether he believed white nationalism was a problem, the former reality television star denied that it was.

“This [attack] was an invasion — of an extremist into our community, our private space,” says Dalziel. “And people like [the gunman] will find comfort in the words of those who tolerate those extreme views.”