The Story Behind TIME’s Journey to Space

This week’s cover illustration, right, of the new space race is a homage to the Dec. 6, 1968, cover. Published shortly before the success of Apollo 8 made U.S. astronauts first to orbit the moon, that issue marked a pivotal moment for space exploration.
Left: Robert Grossman for TIME; Right: Illustration by Alessandro Gottardo for TIME
Ideas
By Edward Felsenthal
Edward Felsenthal is the Editor-in-Chief and CEO of TIME.

One December day in 1968, in Baltimore, 14-year-old Jeffrey Kluger came home from school to find a copy of TIME with the headline Race for the Moon on its cover. Today, Jeff credits that experience with launching him as one of the world’s premier space journalists, a career in which he has documented the race to the moon and beyond in hundreds of stories for TIME, including this week’s cover story, and in 10 books, one of which became the Tom Hanks movie Apollo 13. “I remember laying that week’s issue of TIME out on my bed and kneeling in front of it to read the article,” he says. “I came away thinking, This is it. We’re going to the moon.”

There is probably no subject that better reflects TIME’s own journey than the story of space. TIME launched into the topic with a 1952 cover featuring a space robot. Today, we are building on that legacy through new formats that tell the story in new ways. A 2014 TIME cover story about astronaut Scott Kelly became our Emmy-winning PBS documentary, A Year in Space. Last year, working with NASA and Felix & Paul Studios, we launched the first professional virtual-reality camera to the International Space Station for a multimedia project that will become Space Explorers: The ISS Experience.

With this week’s issue, we’re also launching our TIME Immersive app, with a project—led by TIME’s Mia Tramz and Tomi Omololu-Lange—that lets you experience the 1969 moon landing in 3-D augmented reality in your own home, classroom or office. For more information, visit time.com/apollo11.

I can’t help but imagine another 14-year-old curling up with her phone this week and thinking, “This is it. We’re going to the moon.” 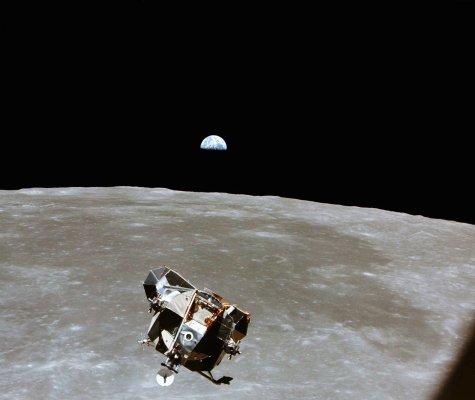 How the Apollo Program Changed Our Understanding of What the Moon Even Is
Next Up: Editor's Pick