President Donald Trump called for a crackdown on violent video games and reforms to mental health laws, arguing that “mental illness and hatred pulls the trigger, not the gun,” in a speech from the White House after mass shootings in El Paso, Texas, and Dayton, Ohio.

Trump’s comments came after two mass shootings rocked the nation over a span of less than 24 hours. Twenty-two people were killed in a shooting at a Walmart in El Paso, Texas, on Saturday and nine victims were fatally shot in Dayton, Ohio, early on Sunday. According to authorities, the El Paso shooting suspect may have posted a manifesto online before the attack filled with anti-immigrant sentiment. Trump called the shooter a “wicked man” and offered condolences to the people of Mexico in his remarks; some of the victims were Mexican nationals.

“In one voice, our nation must condemn racism, bigotry and white supremacy,” Trump said, with Vice President Mike Pence standing beside him, in the Diplomatic Room at the White House. “These sinister ideologies must be defeated. Hate has no place in America. Hatred warps the mind, ravages the heart and devours the soul.”

Trump suggested several policy responses to the shootings, including cracking down on violent video games, supporting “red flag laws” which allow authorities to confiscate guns from people deemed dangerous and directing the Justice Department to propose legislation to ensure that people convicted of hate crimes or mass shootings will face the death penalty. Trump advocated for this “capital punishment be delivered quickly, decisively, and without years of needless delay.”

On Twitter before his speech, Trump also suggested combining background check legislation with immigration reform, which would have little chance of passing Congress.

Trump’s solemn tone speaking beneath a portrait of George Washington in the White House contrasted with a tweet he had sent just hours earlier, blaming the media for “anger and rage” in the country. At the end of his speech, he mistakenly referred to a shooting taking place in Toledo instead of Dayton. 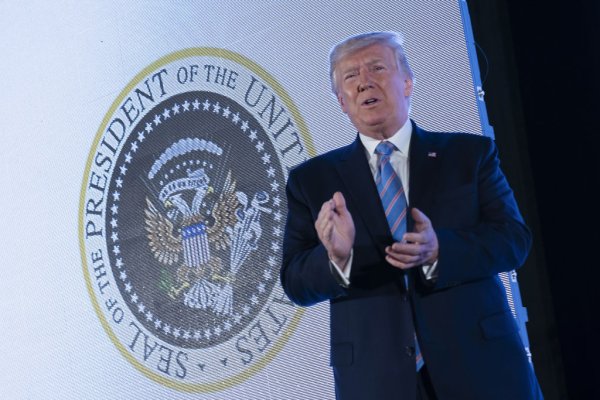 Trump Speaks in Front of Doctored Presidential Seal
Next Up: Editor's Pick