The Dangers of Linking Gun Violence and Mental Illness

After repeated exposure to a piece of information, people will start assuming it’s true, whether or not it actually is, simply because they’ve heard it so many times. Familiarity and repetition can overcome rationality, a phenomenon psychologists call the “illusory truth effect.”

In a 24-hour period during the first weekend of August, two mass shootings—one in El Paso, Texas and the other in Dayton, Ohio—left 31 people dead and 53 injured, as of writing. In between “calls for action” and the need for “thoughts and prayers,” legislators across the political spectrum, ranging from Democratic presidential candidates like Bernie Sanders and Andrew Yang, to Republicans like the Governor of Texas and President Donald Trump, were quick to assign blame to mental illness—despite ample evidence that gun violence is not a mental health problem.

But perhaps it’s not entirely politicians’ fault. A 2016 study published in the peer-reviewed journal Health Affairs found that, in a random sample of 400 news stories about mental illness published from 1995 to 2014—which included sources ranging from the New York Times and the Wall Street Journal to CNN and NBC—38% linked mental illness to interpersonal violence.

So many people have said that mental illness is related to mass shootings from disparate political beliefs, for so many decades, and so many different times that it’s easy to just accept the premise without questioning it. This is “illusory truth.”

However: there is no factual link between mental illness and violence against others. In fact, people with mental health disorders are more likely to be victims of a violent crime (up to 10 times more likely than the general population) than the perpetrators. A 2011 meta analysis found that to prevent one homicide of a person unknown to the perpetrator, 35,000 patients with schizophrenia judged to be at high risk of violence would need to be detained. Similarly, few U.S. mass shootings have been committed by people who were “mentally ill;” there is a much stronger correlation with other issues, like domestic violence. Finally, people with mental illness are much more likely to hurt themselves than others. Two-thirds of gun deaths in this country are suicides, according to the U.S. Centers for Disease Control and Prevention.

Misleading statements about mental health and violence have very real consequences. They contribute to the stigma towards psychiatric patients, which can, in turn, lead to fewer people seeking the treatment they, need. They also engender discrimination: in 2013, a Kaiser Health poll found that 47% of Americans were “very” or “somewhat” uncomfortable living next door to someone with a serious mental illness, and 41% felt the same about working with someone with serious mental health issues.

As an emergency physician and psychiatrist, we see the harmful effects stigma can have on our patients. We have seen patients attempt suicide after a diagnosis of a serious mental illness, believing their life was over anyway. We have seen family members convince patients not to take medication or seek treatment, arguing that the patient could and should “just get over it.” One patient, who had experienced hallucinations in the past, complained of awful physical symptoms, such as intractable vomiting and abdominal pain, that others dismissed as imagined. After months, he finally was diagnosed with late-stage cancer.

The false link between mental illness and violence has another deeply troubling public health impact. When we blame gun violence on “mental illness” (or “video games” or even “assault rifles”) we create a bugaboo that keeps us from doing the hard work needed to make real progress on gun violence. The U.S. mental health system, and our country’s approach to mental illness, is far from perfect. But even if we perfected treatment, we would not stop the current American gun violence epidemic. To do so requires hard discussions and good research evidence about issues ranging from structural inequality, to addiction, to racism and misogyny, to firearm access by at-risk people, to social media. Blaming mass shootings on mental illness stops us from making forward progress.

If we are going to talk about the role of mental health in mass shootings, let’s talk instead about mental health in the aftermath. This spring, two survivors of the Parkland shooting and the father of a child killed at Sandy Hook elementary school died by suicide. Personal exposure to gun violence is associated with an increase in major depression and post-traumatic stress disorder (PTSD). We suspect that exposure to a mass shooting has far worse long-term effects, for both survivors and for their families. A few studies conducted after a 2011 mass shooting at a youth camp in Norway showed increases in both parental and youth PTSD.

Instead of depending on illusory facts, let’s talk about what we don’t know. We currently know nothing about how a population reacts to multiple mass shootings in a short period of time. We know very little about the links between gun violence and suicide. We know almost nothing about the association between social media exposure to gun violence and long-term depression, PTSD, anxiety, or suicide. We need to fund more research into the association between gun violence and mental illness; the long-term consequences of these injuries for survivors, families, and communities; and how to reduce these effects. In doing so, we can figure out not just why these tragedies keep happening, but also how to prevent gun violence and its long-term effects.

Mental illness is certainly a problem in this country. But hate is not a mental illness. Neither is murder. Our patients, friends, and family members with mental illness deserve better than to be America’s scapegoat. 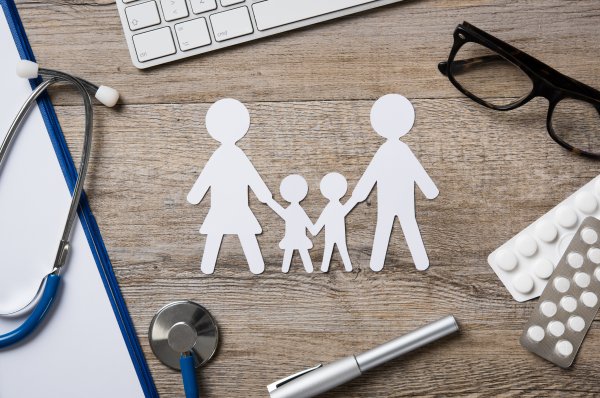 Don’t Get Mad if a Doctor Says They Need to Screen Your Child for Abuse
Next Up: Editor's Pick