How To Stop White Supremacist Terrorism

Police officers walk by shopping carts at the scene of the El Paso mass shooting, on Aug. 4
John Locher—AP
Ideas
By Rod Rosenstein
Rosenstein was Deputy Attorney General from April 2017 to May 2019

When President George W. Bush acknowledged that America faced a significant new terrorist threat after Sept. 11, 2001–less than eight months after he took office–some critics nonetheless argued he deserved blame for failing to take action earlier. But Bush’s response garnered almost universal acclaim. He made it his mission–and the mission of his Administration–to prevent future attacks. As a result, protecting America from foreign terrorism stands as one of the Bush Administration’s greatest achievements.

On Aug. 5, President Donald Trump declared that America must defeat the “sinister ideologies” of racism, bigotry and white supremacy. People consumed with those views are responsible for a growing number of violent crimes motivated by a desire to send a political message, the definition of terrorism. If President Trump wants to replicate President Bush’s success by launching a war on domestic terrorism, he should focus on deterring people from becoming violent white supremacists.

Prevention requires political leaders–not just police and prosecutors–to think holistically about what causes white-supremacist ideologies to fester and foment violence. People are not predisposed at birth to buy high-powered guns and fire them at strangers. By studying common attributes and experiences of terrorists around the world, we can learn how to dissuade others from following the same path. Just as doctors fight communicable diseases by strengthening antibodies and treating early symptoms, a comprehensive strategy to prevent domestic terrorism should include protecting vulnerable people from indoctrination and catching incipient terrorists before they strike.

President Trump identified several possible tactics in his remarks on Aug. 5. Most important, he affirmed that racial-extremist propaganda is a contagion that radicalizes vulnerable people via the Internet. Identifying pernicious racist material and encouraging Internet companies to restrict access to it–as they do with ISIS propaganda–may protect some from terrorist indoctrination.

As part of the Internet strategy, we should alert the public about the volume of divisive racist propaganda posted by agents of Russia and other adversaries. Warning people that propaganda is literally un-American may help build resistance.

The President also suggested that domestic terrorism may be curtailed by establishing protocols to report threats posted on social media, ending the glorification of violence through gruesome video games, reforming mental-health laws and prohibiting firearm possession by people who pose a grave risk to public safety. Legislators should evaluate those ideas and invite additional recommendations.

Criminal prosecution is another important tool, but most terrorists are not deterred by the prospect of death or incarceration after an attack; indeed, that is often part of their plan. Prosecution for notorious terrorist attacks therefore does not discourage copycats. To the contrary, extremists use publicity about successful attacks to inspire future attackers, as we have seen.

Consequently, federal law-enforcement tools and resources are put to their best use when they are employed to develop cases against aspiring terrorists before they engage in mayhem, particularly when prosecution by local authorities would not result in a significant term of incarceration. Proactive cases are often more challenging and always more controversial–because the suspects have not committed significant terrorist acts–but they are enormously effective in preventing crime.

After Sept. 11, Attorney General John Ashcroft ordered federal agencies to disrupt incipient terrorist schemes by pursuing any available criminal charges, from immigration violations to financial fraud. Ashcroft’s approach mirrored a strategy used against the Mafia 40 years earlier, when Attorney General Robert Kennedy hyperbolically threatened to arrest mobsters for spitting on the sidewalk if that was the only available charge. Authorities will need to pursue a similar approach in some domestic terrorism cases to intervene successfully when suspects demonstrate red flags, behaviors that suggest they are inclined to commit terrorist acts.

Finally, thoughtful political rhetoric can be part of the solution, as President Trump implicitly recognized by urging Americans to condemn racism, bigotry and white supremacy. If a President’s words matter–and Donald Trump clearly believes they do–then vociferous advocacy for tolerance might deter some people from adopting pernicious ideologies. Many Presidents have used their bully pulpit to inculcate moral virtues. President Trump pledged in his Inaugural Address to “lift our sights and heal our divisions.” This fraught political moment might inspire him to emphasize that laudable goal in future speeches, just as Sept. 11 set a new course for President Bush. 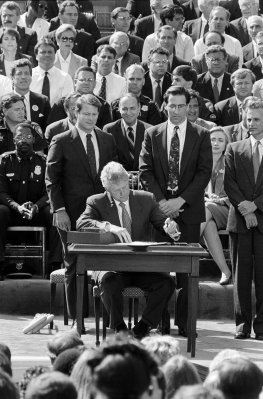