A man lays on top of a woman as others flee the Route 91 Harvest country music festival grounds after a active shooter was reported at Mandalay Bay on Oct. 1, 2017 in Las Vegas.
David Becker/Getty Images
By Andrew Katz

It was nearing the end of the night on Oct. 1 and David Becker, having just photographed the final act of the Route 91 Harvest music festival in Las Vegas, had just walked into the media tent to file his pictures. Becker, who was working for Getty Images, said photographers were only allowed to shoot two songs during the closing act, country star Jason Aldean.

About five to 10 minutes later, he heard popping sounds and went outside. “A security guy said it was just ‘firecrackers’ so I went back to work,” Becker writes in response to questions from TIME and facilitated by Getty. “The second time I heard the popping sounds somebody said to me, ‘it was just speakers or sound equipment,’ and again I went back into the media tent and continued to file.” After a third set of similar noises, “that was when the crowd started to flee.”

At that point, Becker “saw a lot of people panicking and running” for an exit near the media tent. He grabbed his camera and found a good spot to get a grip on what was unfolding. “I stood on a table and started to shoot — thinking to myself, still, that this isn’t really happening, it’s just the speakers popping.” It was dark and difficult to see, but Becker says he saw “a lot of people crying, speaking on cell phones and ducking for cover.”

Becker says the gunfire was sporadic. “It would stop and then more shots, then a lull and then more shots. I could hear people yelling at them to shut off the lights, to be quiet. People were cowering, they were very fearful for their lives. This was at a time before I had looked at any of the photographs and I still didn’t know exactly what was happening.”

As groups of people started to help each other and others ran for cover, “I was trying to capture anything that was moving and that had light,” he remembers. “It was really hard to get a sense of what was happening.”

At 10:12 p.m., just minutes after shots rang out, Becker photographed a man who appeared to be protecting a woman on the ground, shown at top. Was she shot, or worse? Moments later, he says, they both got up and ran away. “I don’t know if she was injured,” he says, “but he was very clearly shielding her with his body and protecting her.”

Victims of a shooting at the Route 91 Harvest country music festival in Las Vegas on Oct. 1, 2017.
David Becker—Getty Images

At 10:16 p.m., Becker came across several bodies on the ground that were surrounded by cups and beer cans, including a bloodied woman. He wasn’t sure if she was alive and didn’t notice the blood on the back of her legs until he was going through his pictures. “That image was when the impact of what I was experiencing hit,” Becker says. “When I realized people were dying.”

Later, he walked back to the media tent and called a colleague for information. He heard words like “Code Red” and “perimeter.” It was then, he says, that “I started looking at my photographs and what I was seeing was just unbelievable.” It was dark out and he hadn’t been able to clearly make out all the details of what he was capturing. Looking at his images, “I could see people covered in blood and I thought, ‘Oh my gosh, this is real.’”

Becker kept editing his pictures and filed his selects. A few minutes went by before he was evacuated with others and escorted to his car. Hours later, Americans would again wake up to the deadliest mass shooting in the country’s modern history. 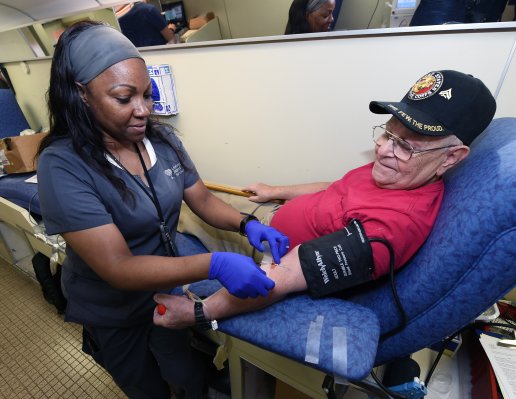 Here's Where You Can Donate Blood to Help Las Vegas Shooting Victims
Next Up: Editor's Pick