It’s almost time. Over 100 million people tune in annually for the Super Bowl, the U.S.’s most-watched televised event. Most are in it for the football. Some for the commercials, and others for the nachos. But it can often feel like there’s just as much hype around the Halftime Show as the part involving sports. And for good reason: the Super Bowl Halftime Show is not only the pinnacle of pop stardom, but it also provides endless fodder for water-cooler conversation, a sub-15-minute spectacle that consistently spawns viral moments that live on well past the final touchdown.

“It’s like winning the Oscar. It’s the biggest show that there is. It has the biggest audience,” Jennifer Lopez explained after she was announced as one of this year’s Super Bowl LIV stars. The other is Shakira, the Colombian entertainer and Grammy-winning artist who rose to fame in the 2000s with hits like “She Wolf” and “Hips Don’t Lie.” They’ll break up the action between the two teams competing this year, the San Francisco 49ers and Kansas City Chiefs.

Together, Lopez and Shakira’s planned performance on Feb. 2 at the Hard Rock Stadium in Miami Gardens marks a major turn of events for the Halftime Show, which has, in the past few years, been subject to criticism for its choices of performers, and whose performers have in turn been criticized for tacitly supporting the NFL during a time of controversy.

The two women are making history, not only for sharing the stage in a dual act for their first time together, but also because they will be the first Latin headliners at the Super Bowl. “I think it’s a very important moment for our community, for the Latino community in this country,” Lopez said in a press conference on Jan. 30. “The Super Bowl is a very American event, as American as it can get. It will also be a reminder of the heritage of this country, which is one of diversity, and that’s what we will be celebrating on Sunday,” added Shakira.

A history of controversy and disappointment

The Super Bowl has not always been the world’s biggest stage. (See: early years that featured local marching bands as the main event.) But for decades now, crowds have come to anticipate its outsized spectacle, now a stage to some of our most famous musical artists. Yet a history of controversy has dogged the show since 2003, when Justin Timberlake and Janet Jackson starred in one of the most-publicized wardrobe snafus of all time. After that, organizers pedaled back their ambitions, bringing on a series of classic rock headliners.

The past decade has been a mixed bag as the show has tried to inch back toward real-time relevance: 2011 brought the The Black Eyed Peas, followed by Madonna, Beyoncé (with a cameo from Destiny’s Child), Bruno Mars, Katy Perry, Coldplay (with a cameo from Beyoncé), Lady Gaga, Justin Timberlake and finally Maroon 5 in 2019. Almost all of the acts brought on extra performers to amp up the energy and broaden their musical options.

In particular, the last five years — starting with a family-friendly set from Mars, then Perry’s zany, viral-Left-Shark show, Coldplay’s underwhelming offering, Timberlake’s less-than-triumphant return and Maroon 5’s lackluster set — have many questioning the place of the Halftime Show in the American pop landscape. On the world’s biggest stage, we expect the most, but we seem to be let down time and again. (The exceptions here are Lady Gaga — whose over-the-top pop diva persona was a natural match for the event — and Beyoncé, whose “Formation” performance packed a punch of historical significance.)

A sharp — and intentional — departure

Enter Lopez and Shakira, who are familiar faces to American audiences, but a sharp departure in look and sound from the Halftime Show’s past. “Shakira being from Barranquilla, me being from the Bronx — the two of us never could have imagined we would be playing at the Super Bowl one day,” Lopez said. Shakira spoke to their Latin heritage: “The Latinos are going through a difficult time in the U.S. right now, and it’s very important for us to convey a message of unity and also to show what a relevant force the Latin community is in this country: how much we have to offer, our idiosyncrasies, our culture.”

Lopez also reiterated the importance of female role models in this Super Bowl. “The two teams that are playing are run by women,” she reminded us, likely referring to 49ers coach Katie Sowers and Norma Hunt, the matriarch of the Chiefs, “and then you’ve got two women headlining the halftime show. That statement alone for me is empowering. When I think of my daughter and all the little girls of the world to be able to have that to see two Latinas doing that in this country at this time, it’s very empowering for us.”

It’s no coincidence that two Latin artists were tapped this year, when the Super Bowl is being held in Miami, one of the U.S.’s most diverse cities with a population that’s over 75% Hispanic or Latino. And it reflects a broader trend in popular music to embrace Latin music, which has been climbing in mainstream radio, chart and streaming popularity in the U.S., thanks in part to crossover hits like 2017’s “Despacito,” Camila Cabello’s salsa-based “Havana” and Cardi B’s “I Like It.” In fact, Americans consumed more Latin music than country or EDM starting in 2018. (The broad “Latin” designation can often include a range from reggaeton and salsa to the pop, trap, and rock music produced by artists deemed Latin.)

Two women at the height of their careers

When the Super Bowl artists were announced, however, some critics were skeptical of the choices. Lopez famously hails from the Bronx (Jenny from the Block, anyone?) and Shakira is from Colombia, although she has made Miami her home base. But Miami has plenty of homegrown talent: Enrique Iglesias, Jason Derulo, Ricky Martin and Flo Rida all call it home, as have DJ Khaled, Camila Cabello, Gloria Estefan and Rick Ross. And then there’s Pitbull, the original Mr. 305 himself (now Mr. Worldwide).

This criticism doesn’t necessarily hold up if you look at the show’s history; the Super Bowl has never matched its location to its stars in the past, although Maroon 5 was subject to similar complaints last year in Atlanta. It’s likely Lopez and Shakira will look to this roster of Miami locals to boost their show; neither are strangers to collaboration, and rumors have popped up that Khaled will be onstage. Pitbull, who featured on Lopez’s 2011 hit “On the Floor,” is currently slated for a pregame performance alongside a long list of major stars.

So what should audiences expect? If all goes well, we’ll see two women at the height of their careers, having toiled for decades to keep themselves relevant — although they’ve never performed together for a major event. (It should be noted that solo female acts are rarely given an opportunity of this size past a certain age, either. Lopez is now 50, and Shakira will be celebrating her 43rd birthday on Super Bowl Sunday.)

This is certainly Lopez’s time to shine: she’s been riding an upswing of popularity thanks to her critically-acclaimed role in last year’s Hustlers, and despite the fact that she hasn’t released an album since 2014, she has decades of material to pull from and a few more recent singles with zest (see: “Dinero” with Cardi B and DJ Khaled). Lopez loves a showgirl moment of glitter and sparkle; she has a penchant for dialing up the dancing and shimmying onstage; and she brings a steady warmth and professionalism, fresh off of a Las Vegas residency in 2018 and ensuing arena tour.

Shakira, meanwhile, made a mark with 2010 World Cup theme song, appeared as a coach on The Voice from 2013 to 2014, released a Grammy-winning album (El Dorado) in 2017 and followed it up with a major world tour. She’s currently one of Spotify’s most-streamed artists — the most-streamed Latin artist on the platform, in fact, and one of the world’s best-selling artists — and has kept up a steady stream of output, including the hit “Chantaje” with Maluma and recent songs “Clandestino” (also with Maluma) and “Me Gusta” with Anuel AA, keeping up easily with her Latin contemporaries and showing off her willingness to collaborate with those pushing Latin pop and reggaeton forward.

Shakira and Lopez enter the Super Bowl conversation at a complicated time in its political history, however. Backlash lingers over the NFL’s choice to sideline Colin Kaepernick; players continue, in protest of racial injustice in America, to take knees during the National Anthem (this year to be sung by Demi Lovato, on a major comeback). Rihanna even reportedly turned down the performance slot in 2019 in solidarity with Kaepernick, and Maroon 5 was targeted for their choice to participate.

But this August, the NFL announced a partnership with Roc Nation, the company helmed by hip-hop mogul and public Kaepernick supporter Jay-Z — a move for which the latter received criticism. Part of Roc Nation’s new role: to assist in the selection of NFL performers. “The National Football League has the platform and opportunity to inspire change across the country,” Jay-Z said in a statement. “This partnership is an opportunity to strengthen the fabric of communities across America.”

So far, that change has been hard to see in a meaningful way as the football season has rolled on as usual. But optics — and spectacle — are crucial. And the Super Bowl Halftime Show is nothing if not the ultimate spectacle. This show is a chance for the NFL to gesture toward the changes Jay-Z has insinuated are coming.

“It’s very Shakira and it’s very Jennifer. It’s a lot of energy, it’s very entertaining, there are heartfelt moments… It’s packed,” Lopez said of what to expect. “I think J-Lo and I are here redefining paradigms of age, race, background,” Shakira added. “What matters is the message. We’re here, and we have a lot of stuff to say.” It’s well past time for them to rightfully join the ranks of the Beyoncés, Katy Perrys and Lady Gagas of the world, who have shined in the Super Bowl spotlight. The bar might be low, but Lopez and Shakira seem eager to raise it. 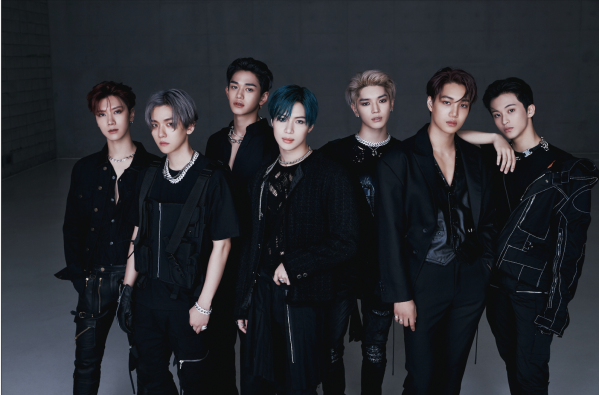 Meet SuperM, the K-Pop Supergroup That Skyrocketed to the Top of the Billboard Charts
Next Up: Editor's Pick