Shakira: America Must Protect All Our People

The recent ban on Muslims entering the U.S. proposed by Donald Trump and currently being reviewed in courts has ignited cries of resistance from both within the U.S. and abroad. I’d like to take a minute, with your indulgence, to add my voice to the heap. Because this is not just a U.S. issue. This is a human issue that has implications for all of us; American and non-American citizens like myself.

Persecution against any group for religious beliefs or race is illegal and unconstitutional in the U.S. Period.

This isn’t just an attack on Muslims or refugees — this is an attack on all humans and in particular, the ones most in need of protection. Right now, worldwide, 28 million children have been uprooted by conflict, driven from their homes by violence and terror. Children know no nations and no borders; those who survive will grow up to follow the lead of those who take them in. Do we show them love and acceptance? Or allow them to fend for themselves, vulnerable to guerrilla groups that will only teach them to perpetuate this cycle of violence?

We have to be vigilant about letting bigotry and hatred creep into the mainstream or be rationalized under the guise of “protecting our people.” If we accept blanket targeting towards Muslims, we can all be sure that other minority groups won’t be far behind, whether it’s by closing borders to other supposed “dangerous” groups or trampling their human rights in other ways.

Muslims are our people. They are human beings with children, needs and dreams like the rest of us. Not all Muslims are terrorists, and by the way, not all terrorists are Muslims.

Latinos are our people. They don’t come to “steal jobs” — they come seeking an opportunity to build a better life for themselves and for their children, which is what the U.S. has always prided itself on representing: opportunities. They are a huge part of the workforce that has contributed to making America the great country it is today.

African Americans are our people. After enduring centuries of oppression and the countless human atrocities that were committed against them, after fighting for civil rights, it’s devastating that racial profiling is still happening and their civil liberties are still being threatened.

I could go on naming groups ad infinitum, but the point is, we shouldn’t be singling out groups and differentiating them by race, class or religion, because according to the Constitution, all of that is irrelevant to their rights as a citizen. Anybody who goes to the U.S. and chooses to raise that flag and uphold those principles is “our people.”

Thanks to social networks, we all have a platform to use our voice today. For every post I see with hateful language, I see others that lift my spirits and reassure me that we haven’t totally lost our way. Lawyers in airports offering free counsel to refugees, New Yorkers banding together on the subway to erase neo-Nazi vandalism, doctors volunteering their time to give free advice to women that need it, and citizen activists marching for equal rights for all.

Let’s keep tipping the scales in favor of “liberty and justice for all,” keep using our voices to lift up others and speak out for those whose voices have been stripped from them. I applaud all of you who have spoken out against the ban—keep up the good fight and never back down. #resist 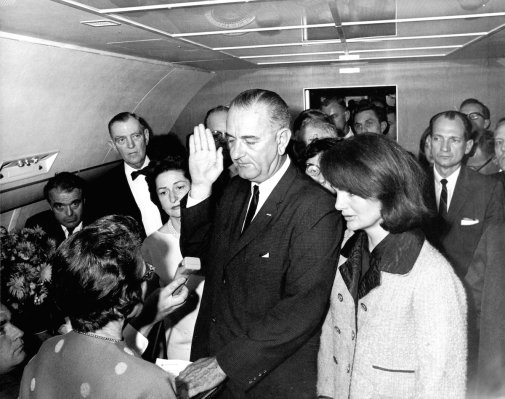 The 25th Amendment at 50 and What Happens if the President Can't Do His Job
Next Up: Editor's Pick