'I Feel Like Jay-Z Can Bring Back Colin Kaepernick.' Celebrities Weigh in on Jay Z's New NFL Deal

Cardi B is known for speaking her mind and her thoughts on Jay Z‘s controversial new deal with the NFL are no exception.

The Bronx rapper told TMZ on Saturday that she thinks that Jay Z and Roc Nation consulting on entertainment and social justice projects for the NFL could “make a change.” Jay Z, who will act as a “live music entertainment strategist” for the NFL, has been criticized for working with the league in light of its treatment of Colin Kaepernick following his activism.

Cardi also said that she hoped that Jay Z would be able to influence the league to hire Kaepernick, who has not played in the league since 2016, following tensions over his decision to kneel during the national anthem as a form of peaceful protest against police brutality and racial inequality.

Cardi has been a vocal supporter of Kaepernick and his activism; last year, she told the Associated Press that she turned down the opportunity to appear during the Super Bowl halftime show as a show of solidarity with him.

Cardi isn’t the only one who’s spoken publicly about the issue. Carolina Panthers player Eric Reid, who began kneeling during the anthem as show of solidarity for Kaepernick, weighed in on a rumor that Jay Z may also become a part owner of an NFL team.

“Jay-Z claimed to be a supporter of Colin, wore his jersey, told people not to perform at the Super Bowl because of [what] the NFL did to Colin,” Reid said. “Now he’s going to be a part owner, that’s kind of despicable.”

Jay Z, for his part, responded to critics by positing that his NFL deal was also a way of working to address racial inequality.

“We forget that Colin’s whole thing was to bring attention to social injustice,” he said during a press conference about the partnership on Wednesday. “In that case, this is a success.”

Later, when asked whether he would kneel or stand during the anthem, Jay Z said: “I think we’ve moved past kneeling. I think it’s time to go into actionable items.”

Kaepernick did not address the issue directly, but posted a tweet of Reid and other NFL players who continue to kneel during the national anthem, expressing thanks and encouraging them to “continue to put their beliefs into action.” 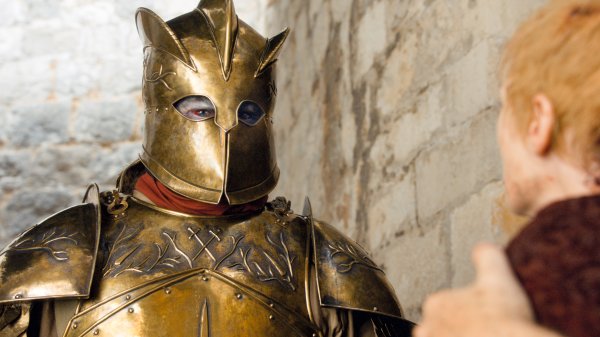 Come and See Game of Thrones' The Mountain Lift Ed Sheeran Over His Head
Next Up: Editor's Pick