Sylvia Earle, Carla Hayden and More Reflect on Their Journeys to Become 'Firsts'

Sylvia Earle, the first woman to become chief scientist of the U.S. National Oceanic and Atmospheric Administration, didn’t set out to be a trailblazer. She just wanted to study science.

“I never thought of myself as being a feminist,” Earle said at an event Tuesday night launching TIME Firsts, a multimedia project featuring 46 groundbreaking women. “It wasn’t about labels. It was about doing the best I could do to be what I was aspiring to be.”

The women — who span professions and generations — agreed that they didn’t necessarily aim to shatter the glass ceiling, but rather just wanted to accomplish their own dreams. And all said that they were told by their parents that they could do whatever they wanted, regardless of their gender. “I grew up blissfully naive of gender prejudices and race prejudices,” Lin said.

But, the women say their journeys made them well aware of those biases. Lin reflected on learning about the racist hate mail directed at her when she was chosen to design the Vietnam Veterans Memorial and said she’s frustrated that she’s still often described by her physical appearance in articles. Hayden said she’s been told that she doesn’t “look like a librarian.”

And though the four leaders agreed that circumstances have vastly improved for women, there are still a number of roadblocks in the way.

“We will look to the day when we don’t actually celebrate someone breaking the glass ceiling, we’ll celebrate its disappearance,” Gibbs said. “And when that happens, that will be because of… women like these.” 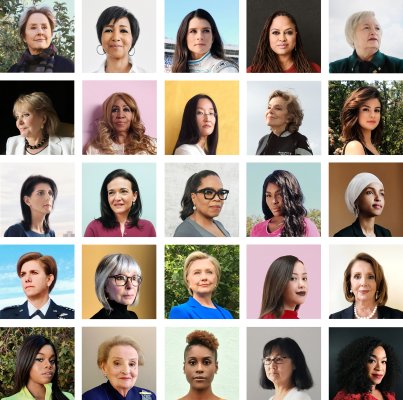