'I Couldn't Be an Enabler.' Rihanna Discusses Why She Turned Down the 2019 Super Bowl Halftime Show

Rihanna has confirmed reports that she declined a request to perform during the Super Bowl halftime show to support football player and activist Colin Kaepernick.

In a new interview with Vogue, the singer confirmed reports from last year that she had turned down the event in solidarity with the former San Francisco 49ers quarterback, who stoked both solidarity and controversy when he decided not to stand for the national anthem in 2016 as a peaceful protest against police brutality and injustice toward people of color in the U.S.

“I couldn’t dare do that. For what?” Rihanna told Vogue of her decision to not perform during the halftime show at the 2019 Super Bowl. “Who gains from that? Not my people. I just couldn’t be a sellout. I couldn’t be an enabler. There’s things within that organization that I do not agree with at all, and I was not about to go and be of service to them in any way.”

In 2018, US Weekly reported that Rihanna had rejected an offer to perform at the halftime show. Maroon 5 ended up headlining the 2019 Super Bowl halftime show, with rappers Travis Scott and Big Boi joining the performance.

The NFL announced the decision to have Maroon 5 headline the show after several months of controversy prompted by its response to Kaepernick’s national anthem protest. Kaepernick, who hasn’t played in an NFL game since the 2016 season, has said the NFL essentially blacklisted him over his protest.

Rihanna was among a number of stars who declined to participate in the Super Bowl last year. Cardi B turned down a similar offer to perform during the halftime show. Comedian Amy Schumer said in October 2018 that she would not be in a Super Bowl commercial and called for more white football players to kneel in solidarity with Kaepernick’s message. 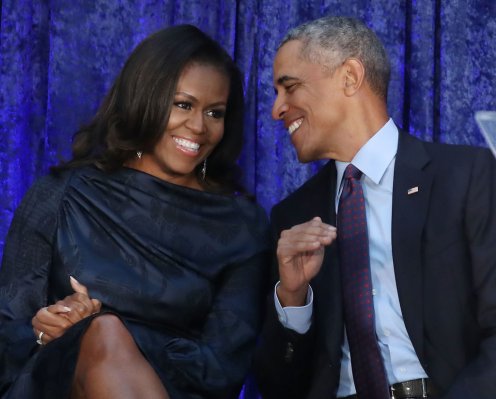 'I'd Say He Delivered.' It's That Time of Year When the Obamas Send Romantic Anniversary Messages to Each Other
Next Up: Editor's Pick