Leave it to Jennifer Lopez to bring the house down during her performance at the 2018 TIME 100 Gala.

Lopez, who is also one of this year’s honorees on the list of 100 influential individuals from around the world, turned the Tuesday night event in New York into a party with her lively showcase. The Bronx-born singer-actor-entrepreneur showed off her signature moves during renditions of fan favorites, kicking things off with a dramatic rendition of “Waiting for Tonight” while bedecked in a long white dress with high slits.

“How’s everybody feeling tonight? I love coming back to New York. It’s my hometown. Do we have any Bronx girls in the house?” Lopez asked. (The answer to the Bronx question was yes: activist Tarana Burke, in fact.) “Whenever I come back to New York I always think about the beginning. I think about riding the train. I think about my mom’s cooking,” she mused. “Why don’t we do that, why don’t we go back to the beginning?” That led her to perform “If You Had My Love,” which got Leslie Jones — sitting in the front row — to groove.

“I heard that we’re celebrating the 100 most influential people in the world, and a bunch of them are here tonight,” Lopez continued. “You have done things to inspire and to make things a better world in your own way, and I congratulate you. To me that’s kind of an occasion for a party. Shall we have a party? I know how to party. All y’all ready to party?”

She then broke it down into “Dance the Night Away,” Love to Make Love to You Baby” and a vivacious “Let’s get Loud” with the crowd on their feet. At one point, there was a dramatic costume change, in which Lopez stripped off her white dress to reveal a sheer bedazzled bodysuit — and some unbeatable shimmying, rewarded with a standing ovation.

For her last act, Lopez donned a giant white coat and called upon boyfriend and baseball legend Alex Rodriguez to lend her a bedazzled baseball cap, handed off with a kiss. She then segued into her signature song, “Jenny from the Block,” ending on a high.

Lopez last released a full album in 2014, but has since been busy performing at her Las Vegas residency, starring in TV show Shades of Blue, supporting philanthropic causes like the humanitarian crisis in Puerto Rico, launching a new makeup line, running her production company and even releasing festive Spanish-language singles, including “Amor, Amor, Amor” and “Ni Tú Ni Yo.”

See highlights from Lopez’s performance at the TIME 100 Gala in the video, above. 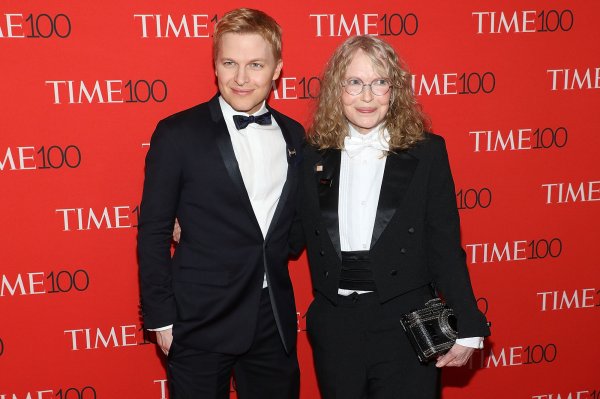 Mia Farrow Says She's Spent Her Whole Life Confronting the Issues #MeToo Is Fighting Against
Next Up: Editor's Pick