From the early aughts of YouTube to the beginnings of social media, cats have been among the most ubiquitous icons and some of the very first memes. The cranky-looking Grumpy Cat and childlike Lil Bub, both of whom left us last year, are shining examples of this furry fascination.

The last year in particular has seen the debut of some viral cats of note. There are mischievous troublemakers and there are pets who just want more attention from their humans. (And, on more than one occasion, these cats get by with a little help from their friends.)

Here, TIME has ranked the best viral cats of the last year, on some very serious criteria: humor, skill, uniqueness and, in most cases, cuteness.

A black cat runs onto the field during the National Football League game between the New York Giants and the Dallas Cowboys on November 4, 2019 at MetLife Stadium in East Rutherford, NJ.
Rich Graes—Icon Sportswire/Getty Images

It didn’t take a human’s Twitter thread to make this one go viral. The black cat who interrupted a New York Giants and Dallas Cowboys game on Nov. 4, 2019, found fame on his own by storming MetLife Stadium during the NFL game. A radio announcer for Westwood One took the potentially superstitious cat quite seriously. “Policemen and state troopers have come onto the field, and the cat runs into the end zone! That is a touchdown,” Kevin Harlan said. “And the cat is elusive, kind of like [Saquon] Barkley and [Ezekiel] Elliott!”

His athletic prowess and agility are unmatched.

A cat fight is expected from the first moment of this viral video. Shared by Twitter user @MerielMyers on Nov. 4, this small gray cat makes his feelings known as he watches his owners play with a new, blonde kitten. The jealousy is palpable.

The video has 3.7 million views because how can you ignore this cat’s emotional needs? Naturally, many people began theorizing as to what the gray cat was thinking. One user suggested the cat was “calculating how they’re [going to] make it look like the orange cat ‘ran away.'”

Jealousy is hard, but rather than engaging in a cat fight, this furry friend just watched in disbelief.

As the old adage goes, all is fair in love and war. These two cool cats certainly took that wisdom to heart in their own battle. YouTuber Laura Lee shared security footage that revealed her black cat pushing her other cat into the pool.

Upon further investigation, Lee discovered that the push was actually one of retaliation. Earlier, the spotted cat bit the black cat, spawning one of the most legendary cat fights in internet history. We can thank modern technology for the fact that Lee was able to capture both encounters on camera, but what happened between the cats behind the scenes remains a mystery.

We can all take some inspiration from this premeditated power play.

People have long been dressing as cats for Halloween. (Many of us are lazy, and putting on a black headband with cat ears is, well, extremely easy.) But it’s important to take into account how your pet may feel upon seeing you steal his or her look.

Last Halloween, one cat threw a proper kitty tantrum because his owner not only had kitty ears on for the holiday, but also painted on some whiskers, ultimately stealing his look. “He looked really freaked out, and looked like he was going to pounce on me until I took the ears off. Then, he went back to normal as if nothing happened,” the owner told viral video licensing company ViralHog.

The cat’s anger was so serious that he lowered his ears, a sign of a feline’s frustration.

It’s safe to assume the owner learned her lesson.

Just as a pet dog may salivate as his owner cooks up some beef, one cat caused quite a stir with her owner as he dared to eat tuna without her. The cat owner, voice actor Jesse Nowack, had a seriously intense experience when his cat, Khaleesi — aptly named after the Game of Thrones Mad Queen — was rightfully upset after being denied the can of tuna in question.

It was evidently not only the fishy scent that caused such a ruckus. This cat seems to feel intense emotions around any and all cans, assuming her own kitty food is being prepared. “I opened beans the other day,” Nowack wrote in the Twitter thread, “and then I let her smell it and the look of pure betrayal on her face cut me deep inside.”

Though Khaleesi’s antics would imply she wants to eat some human food, Nowack says that she’s just hamming it up for the drama. “She’s a super picky eater and will only eat her wet and dry cat food, despite getting very excited about me opening any can in the house,” he told TIME in an email.

During the holiday season, it’s nice to get creative. From putting up Hanukkah bushes to sewing your own matching pajamas, families are always innovating their traditions. Last Christmas, one mom took her family’s Elf on the Shelf toys to the next level by creating snow angels, using flour as the fake snow.

Unfortunately, the display did not last 24 hours, as their pet cat had his own decorative plan.

Twitter user Siarra Swanson told her mom’s Christmastime cat story in four parts, showing the unfortunate aftermath of a once-beautiful holiday display and the cat covered in flour. Some cats set their sights on desired food, but others, like this one, are more interested in wreaking general havoc.

This cat couldn’t have made it without two lovely dog friends at his or her side. In March, writer John Paul Brammer shared his wild night with the three animals on Twitter, after spotting two dogs and a cat outside his apartment door.

Once the cat slipped by him, Brammer tweeted that he had to check his own video footage “for evidence.”

The viral thread showed that Brammer was up against some serious “masterminds,” as he called them, as he couldn’t seem to keep them out of his apartment. They appeared to be opening doors all on their own.

Soon enough, it was revealed that the mysterious pets belonged to Brammer’s upstairs neighbors. But still, they wouldn’t be persuaded to head back home. “I would find one solution and then, the animals would overcome it,” Brammer told TIME in a previous interview.

Some cats, when armed with two dog friends, just cannot be tamed.

The Friends for Life Animal Rescue and Adoption Organization’s Houston location had a run for its money last fall with legendary Quilty the Shelter Cat, a devoted animal who wouldn’t stop freeing himself and the other cats from their rooms. Somehow, Quilty is another animal with the magical ability to open doors all on his own. The shelter had a blast spreading the word on social media.

“Quilty’s review with the parole board was denied, so he released himself of his own recognizance today. He felt that confinement had nothing more to offer him,” one shelter worker wrote in a Facebook comment.

Other cat adoption centers got involved in Quilty’s case online, with the Nebraska Humane Society’s cat-focused Twitter page asserting that Quilty is innocent.

Cinderblock the Cat may not be the most famous gal of all the aforementioned legendary cats, but she might just be the most relatable. Cinderblock has been on a weight loss journey with her doctors at Northshore Veterinary Hospital in Bellingham, Wash., and the vets have documented the process online.

It would appear that the workouts are going well for her. “Our chonkspirational Cinderella has really come a long way since day 1 in underwater treadmill therapy,” a recent caption from Cinderblock’s page reads. “Gaining more strength and endurance, she continues to increase her duration each time in addition to tolerating a higher level of water.”

Many people have fallen in love with Cinderblock’s reluctant dedication to her fitness regiment, commenting that they have felt similarly in their workouts before, and providing encouragement.

The top cat on our list is best known for his part in the “woman yelling at a cat” meme. Smudge’s owner first posted the now-famous image — of Smudge sitting at the dinner table with salad in front of him — on Tumblr in the summer of 2018, but it blew up in the summer of 2019 after Twitter user @MISSINGEGIRL juxtaposed it with a screen grab from The Real Housewives of Beverly Hills. In the scene, which aired in 2011, Taylor Armstrong cries, shouts and points while co-star Kyle Richards tries to soothe her. The internet immediately fell in love with the two images used next to each other.

The meme needs little explanation: It looks like Armstrong is fighting with a cat, and people have shared it for all kinds of purposes, even taking inspiration from the construction to craft their own memes.

Smudge is a rescue cat who lives in Ottawa, Ontario, and sitting at the table is really important to him. “He demands to have a chair at the table,” his owner, Miranda Stillabower, told TIME in an interview. “He hates to not sit with us at dinner.”

Beyond the fact that “woman yelling at a cat” has remained unavoidable months later, the data on Smudge’s fame speaks for itself: Smudge, who has also been dubbed the “table cat,” has 1.4 million followers on Instagram and multiple Facebook and Twitter groups dedicated to the fandom. 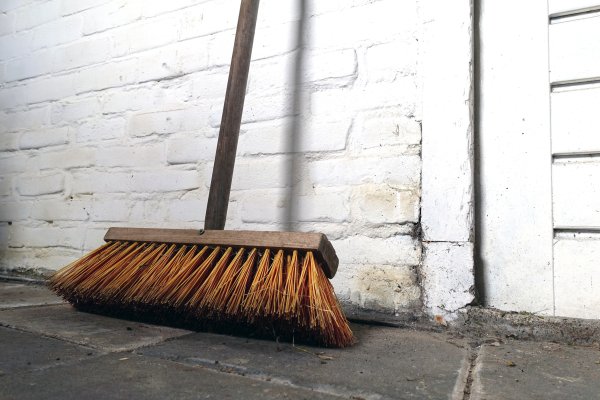 Everyone's Getting Swept Up in the #BroomChallenge, Because Housework Really Can Be Magic Like That
Next Up: Editor's Pick