Viral Kitty Lil Bub, One of the Internet's Most Beloved Pets, Dies at 8

“I have always been fully transparent about BUB’s health, and it was no secret that she was battling a persistent and aggressive bone infection,” Bridavsky wrote. “Even knowing this, we weren’t expecting her to pass so soon or so abruptly without warning. I truly believe that she willingly made the decision to leave her failing body so that our family would not have to make that difficult decision ourselves.”

Lil Bub was one of Instagram’s most-recognizable furry stars, having developed a passionate following over her years in the spotlight. She was originally picked up from a feral litter in Indiana in 2011, and was known for distinctive kittenish features that lasted well into her later years. (Genetic anomalies resulted in Lil Bub’s dwarfism, extra toes and extra-big eyes.)

But Lil Bub wasn’t just a cute face. Over her eight years, she appeared on TV and at conventions, starred in a Vice documentary, graced the front page of Reddit and raised over $700,000 for fellow animals in need, according to Bridavsky’s farewell letter. She also wrote a book, hosted a talk show and released an original album in 2015, Science & Magic: A Soundtrack To The Universe.

“It is impossible to put into words the profound effect that BUB has had on my life, on the lives of thousands of homeless pets, and on the lives of those of you that have cared for her as if she were your own family,” Bridavsky continued. “She taught me everything that I know about unconditional love… and she has been a constant source of warmth and love in our lives for the past 8 years. To say that our family is devastated would be an understatement.”

Lil Bub was part of a generation of cat and dog celebrities who built a platform from YouTube videos, social media and viral memes. Her peers included Grumpy Cat (who passed away in March 2019), Marnie the Dog and Doug the Pug. At the time of her death, Lil Bub had over 2.3 million followers on Instagram and over 340 thousand subscribers on YouTube, who often tuned in to hear her relaxing purring videos.

“I will never forget your generosity, your limitless supply of love, or your uncanny ability to bring so much magic and joy to the world,” Bridavsky wrote, concluding the poignant obituary. “I am forever honored and humbled that you chose me as your caretaker. Please visit all of us in our dreams often.” 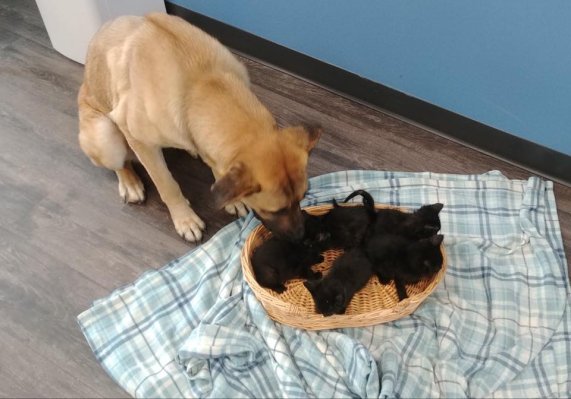 Energetic German Shepherd 'Serenity' Will Stop at Nothing to Protect Her Kitten 'Babies'
Next Up: Editor's Pick