The Real Reason American Jews Give Gifts During Hanukkah

For Jewish people around the world, Hanukkah is marked by lighting candles on the menorah for eight nights, eating latkes and spinning the dreidel. But when the holiday starts — on the evening of Dec. 22 in 2019 — many Jewish Americans will be focused on a different tradition: gift-giving.

“It’s important to recognize that it is an American Jewish phenomenon, this gift-giving that’s part of Hanukkah,” Rabbi Menachem Creditor, scholar in residence at the UJA-Federation of New York, tells TIME. “It’s not historically part of Hanukkah at all.”

In that, gift-giving on Hanukkah is not unlike gift-giving on Christmas — it has little, if anything, to do with the religious requirements of the celebration.

The story of Hanukkah — which, in its varying versions, celebrates the rededication of the Jewish temple in Jerusalem around 200 B.C., and how a small amount of oil miraculously lasted for eight nights — is not told in the Hebrew Bible, but is instead found in the first and second Books of Maccabees. This makes Hanukkah less important religiously than other holidays like Passover, Yom Kippur and Rosh Hashanah. Those festivals technically call for at least one day of rest, similar to the weekly Sabbath. On Hanukkah, however, no such rest is necessary.

Historically, Jews worldwide didn’t pay much attention to the festival of lights at all. Rabbi Gustav Gottheil, a Prussian-American rabbi of the Reform movement of Judaism, remarked in 1884 that “the customary candles disappear more and more from Jewish homes,” according to Dianne Ashton’s Hanukkah in America: A History. It wasn’t until the early 20th century that the holiday gained some traction in the U.S.

By now, Hanukkah is now one of the two most widely observed holidays for Jewish Americans, Creditor says, and it’s perhaps no surprise that this big rise in its popularity came soon after gift-giving made its way into the picture as part of the quintessential Christmas experience. In the late 1800s, Creditor explains, gift-giving became a “commercialized way of expressing Christmas, and Christmas became a national holiday.”

So, by the early 20th century, American Jews had become accustomed to seeing Christmas gifts abound. Parents didn’t want their children to feel left out as their peers received presents every December. Evidence of the shift can be seen in Yiddish-language U.S. newspapers from the 1920s, Creditor says, which would advertise the giving of gifts in honor of Hanukkah.

These are the beginnings to what professor and author Eliezer Segal calls the “exaggerated commercialization of the American Hanukkah” in his book Holidays, History and Halakhah. More recent festival innovations like Hanukkah Harry and Hanukkah bushes, which are clearly meant to mimic Christmas traditions like Santa and Christmas trees, further propagate the notion that Hanukkah is a copy of Christmas.

But Creditor sees this shift as something sweeter. “[Parents] saw that [giving gifts] was a way of creating joy around the time of Hanukkah,” Creditor says. “I think it wasn’t to be like Christmas, it was so that Jewish children would have joy on Hanukkah. I know it sounds like a narrow difference, but the distinguishing factor is, we didn’t want to do Christmas — we wanted to have joy.”

And there is one aspect of giving on Hanukkah that predates presents like AirPods and gift cards: gelt. The gold foil-wrapped chocolate coins that are given to children and eaten during Hanukkah began as “an act of rebellion,” according to Creditor, after the Maccabees defeated the Greeks and rebuilt the temple. While this story is also one of popular legend, many scholars say that the Jewish community invented its own new currency in celebration to “establish [their] own independence,” Creditor says; that act was the reference point for the later introduction of chocolate coins into the holiday tradition.

“That trickles down in history, and so gelt was distributed to Jewish children in order to distribute to their teachers, to give charity. It was never about receiving money,” Creditor says, “it was about understanding that we are supposed to do good with money we accumulate.”

But between the origin story of Hanukkah and the history of giving gifts in its honor, he still sees an irony. The story of Hanukkah teaches about the Jewish people standing up in the face of oppression, refusing to assimilate. “And ironically, gift-giving on Hanukkah is assimilating our surrounding culture into our rituals,” Creditor says. “It’s sort of antithetical to Hanukkah, to do someone else’s ritual, when Hanukkah was about the re-establishing of our own.”

Still, there are always lessons to be learned from other faiths, and Creditor notes that members of the Christian clergy aren’t pleased with the over-commercialization of Christmas, either.

While the tradition has certainly become ingrained in American culture, he urges celebrants to remember that the holiday is about more than gifts.

“I think the winter months always remind us that the world can be dark, and Hanukkah is always a reminder that the darkness can be pierced,” Creditor says. “We can banish it with light.” 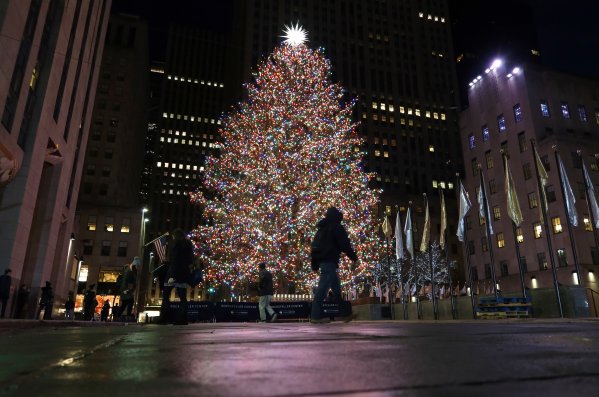 How Christmas Trees Became a Holiday Tradition
Next Up: Editor's Pick