Grumpy Cat, Whose Frown Made the Internet Smile, Dies After Infection

Grumpy Cat, whose seemingly unamused facial expressions shot her to viral fame in 2012, has died at the age of seven, her owners have said.

“We are unimaginably heartbroken,” Grumpy Cat’s family wrote in a message posted on Twitter on Friday announcing her death to the world. “She passed away peacefully … at home in the arms of her mommy, Tabatha.”

“Besides being our baby and a cherished member of the family, Grumpy Cat has helped millions of people smile all around the world – even when times were tough,” the statement continued. “Her spirit will continue to live on through her fans everywhere.”

Grumpy Cat, whose permanent frown came from being born with dwarfism and an underbite, became an internet sensation in 2012, after a photo of her perpetually annoyed-looking face was posted on Reddit in September of that year, according to Know Your Meme, a website that tracks the history of viral moments. The image became immediate fodder for creative Photoshopping and inspired several memes, and gained more than 25,000 upvotes in the first 24 hours.

Life took off for Grumpy Cat from that point, as she became one of the most popular memes in internet history. She started popping up on TV, with appearances on news and morning shows, American Idol, The Bachelorette and WWE’s Monday Night Raw between 2012 and 2014. She even starred a 2014 Lifetime movie, called Grumpy Cat’s Worst Christmas Ever. Aubrey Plaza voiced Grumpy Cat in the made-for-TV movie.

Grumpy Cat’s owners cultivated a grumpy personality on her social media channels. “I hate how my life has been turned into a meme,” she wrote in 2017. For her owners, Grumpy Cat’s displeased face became an opportunity to capitalize — she appeared on a t-shirt line and even landed a sponsorship with cat food brand Friskies.

By the end of her life, Grumpy Cat had found an internet community numbering in the millions, with 2.4 million Instagram followers, 1.5 million Twitter followers and 8.5 million likes on Facebook. 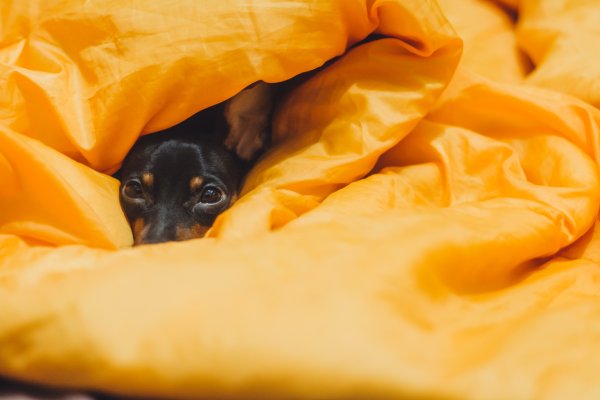 This Puppy's Guilty Face Trapped in a Blanket Jail of Its Own Making Is the Ultimate Mug Shot
Next Up: Editor's Pick