The Snubs, Surprises and History-Making Nods of the 2021 Oscar Nominations

The most-nominated film of the 93rd Annual Academy Awards, which were announced Monday morning by Priyanka Chopra Jonas and Nick Jonas, shouldn’t come as a surprise to anyone who follows Oscars history: Mank, a celebratory Hollywood-movie-about-Hollywood, scooped up 10 nominations, including one for Best Picture.

But there were plenty of surprises and firsts among the nominations to match a bizarre year of change for the movie industry, in which theaters shuttered their doors across the country and productions were filmed in secret or with strict safety protocols, if at all. This is the most racially and ethnically diverse set of acting nominees in Oscars history; and prior to Chloé Zhao and Emerald Fennell’s directing nominations, never before have two female directors been nominated in the same year. Six films scored six nominations—The Father, Judas and the Black Messiah, Minari, Nomadland, Sound of Metal, and The Trial of the Chicago 7. Overall, streamers had a strong showing, proving how they have tightened their grip over the industry, especially during a year when people largely watched from home.

The ceremony will take place on April 25; no host has been announced. Here are the main takeaways from the nominations.

Snub and Surprise: Judas and the Black Messiah

It’s become a recent tradition for Black ensemble movies to receive plenty of Oscar hype and then fail to be rewarded—but history did not repeat itself with Judas and the Black Messiah, which follows the life and death of Chicago Black Panther Party leader Fred Hampton. While some prognosticators were skittish about its chances, the film was recognized up and down the ballot, setting plenty of precedents along the way. Daniel Kaluuya became the youngest Black actor to reach two acting nominations (following Get Out); his and LaKeith Stanfield’s joint nominations mark the first time the Academy has recognized two Black male actors from the same film. Judas also became the first movie with an all-Black producing team—Shaka King, Charles D. King and Ryan Coogler—to be nominated for best picture.

However, it is odd that for a two-handed movie, both Kaluuya and Stanfield were somehow nominated for supporting actor. Who did the Academy think the lead of the film was—Jesse Plemons? Meanwhile, Dominique Fishback, who delivers a quietly wrenching performance as activist Deborah Johnson, was snubbed.

We hope #OscarsSoWhite creator April Reign, wherever she is, is having a great day. Five years after the second straight nominee pool was announced in which all 20 acting nominations went to white actors, a record nine nonwhite actors were nominated today. (The previous record was seven.) Steven Yeun became the first Asian-American actor to be nominated for best actor; Riz Ahmed became the first Muslim actor to do so, as well as the first person of Pakistani descent nominated for an Academy Award for acting. Just four white Americans were nominated; meanwhile, the U.K., perhaps unsurprisingly, sent a strong contingent that includes Ahmed, Carrie Mulligan, Vanessa Kirby, Daniel Kaluuya, Sacha Baron Cohen, Olivia Colman and Anthony Hopkins. It’s far too early to raise the “Mission Accomplished” banner—but this crop of nominees certainly looks a bit more like the world—and their performances were sublime.

Women made history in the directing category this year. Both Chloë Zhao (Nomadland) and Emerald Fennell (Promising Young Woman) received nominations, the first time the Academy has recognized two women in one year. Zhao also became the first woman of color to be nominated for Best Director, and the first woman to snag four nominations for her film in one year. Fennell, meanwhile, joined a small club of women filmmakers whose films received three nominations in one year, along with Sofia Coppola and Fran Walsh.

Some Oscar prognosticators had held out hope that Regina King would earn a nod for One Night in Miami as well—all three women were nominated at the Globes—making for a majority-female category. But it wasn’t to be.

For now, Kathryn Bigelow is the only woman to ever win a Best Directing Oscar in Academy Awards history. Notably, the film that she won for, 2010’s The Hurt Locker, was coded as a very traditionally masculine movie: a war film with an almost entirely male cast. By contrast, Zhao and Fennell’s films center on the complex inner lives of women—Zhao’s on a woman who decides to make a radical change to her life in middle age and Fennell’s on a vengeful angel of the #MeToo era. A win by either Zhao or Fennell would help show that not only are women making great films, but they are making great films about women.

It’s hard to quibble too much with the recognition given to Minari, which, after being deemed too “foreign” to compete for the top honors at the Golden Globes, is now a six-time Oscar nominee, including for Best Picture. The 73-year-old Youn Yuh-jung is particularly deserving for her turn as the foul-mouthed family matriarch Soon-ja; she receives her first Academy Award nomination in her storied five decade-career.

Still, it would have been delightful to see the 8-year-old Alan Kim, who conveys both boyhood wonder and an acuity far surpassing his age as David in the film, be nominated for supporting actor, especially given how charming he’s been on the awards circuit recently. His acceptance speech for best young actor at the Critics’ Choice Awards, in which he sobbed tears of joy, was an instant classic, as was his purple-belt-clad sparring routine on Jimmy Kimmel. Here’s hoping he, Jacob Tremblay and Brooklynn Prince team up for a movie soon.

Perhaps it’s not actually surprising that legendary actor Glenn Close got a Best Supporting Actress nomination—her eighth Academy Award nom ever—for an Oscar-bait adaptation of a bestselling memoir. But critics panned the film and Close is simultaneously nominated for a Worst Performance Razzie, so that slot probably could have gone to someone else. We’ll still root for her in the future—perhaps the ninth time’s the charm?

Say what you want about Christopher Nolan’s mind-bending movie—the plot was indecipherable (thus no screenplay nomination), the dialogue was barely audible (it wasn’t going to get an achievement in sound nod). But the movie achieved the two main feats that a Nolan movie must achieve: It was visually stunning and the score swept audiences away into a fictional world where the words “temporal pincer movement” actually make sense.

The score, especially, was the engine that drove the action in that film. Thankfully, Tenet’s composer Ludwig Göransson has already won an Academy Award for the Black Panther score and is emerging as among the most promising young artists in Hollywood. He will get another shot.

Tenet did receive nods for Best Achievement in Visual Effects and production design. It’s a good way to acknowledge a movie that, whatever its flaws, became the center of an important conversation over whether the movie theater experience will endure post-pandemic.

Surprise: Director Thomas Vinterberg for Another Round

Few Oscar bettors predicted that Thomas Vinterberg would snag a Best Director nomination for the Mads Mikkelson starrer Another Round. The Oscars still tend to be exhaustingly American-centric, so the Danish film director’s nomination is being greeted as a coup by Another Round fans on Twitter. Some are even playfully hinting that Vinterberg should be congratulated for stealing longtime screenwriter but relatively new director Aaron Sorkin’s spot.

Several of the presumed frontrunners in the documentary race, including Boys State, Dick Johnson Is Dead and Welcome to Chechnya, didn’t even get a nomination at this year’s Oscars. As the dust settles, it certainly looks as if Time, one of the best-reviewed films of the year, might take home the gold. The film about a woman who spends two decades campaigning for her husband’s release from prison has struck a chord with critics and viewers alike in a year when the #BlackLivesMatter movement has renewed our scrutiny of the criminal justice system.

On the other hand, those snubs made room for some crowd favorites: Crip Camp and My Octopus Teacher, both of which found success on Netflix.

Snubs: Palm Springs, First Cow and Other Little Engines That Could

We can all agree that this was a weird year for movies. Many of the films that critics and insiders were buzzing about in the spring of 2020 as major Oscar contenders for 2021—In the Heights, West Side Story, The French Dispatch, Dune, The Many Saints of Newark—never debuted. Studios are holding back some of their biggest potential hits until movie theaters reopen.

That left an opening for smaller movies or non-dramatic films to sneak into the Oscars conversation. It would have been lovely to see critically acclaimed indies like First Cow, The Assistant and Never Rarely Sometimes Always (all directed by women, by the way) get a nomination or two. The romantic comedy Palm Springs was also left out in the cold, even though it provided much needed distraction and levity at a time when few movies were releasing to VOD. 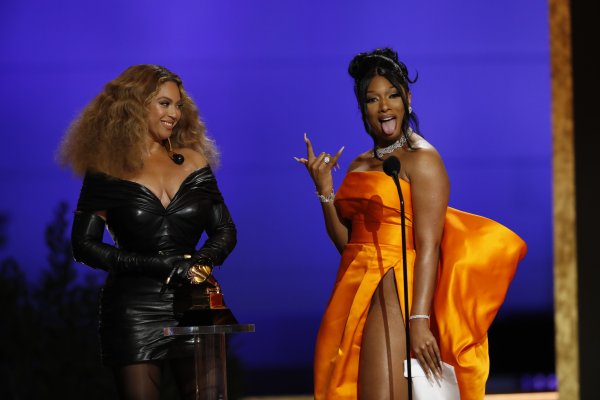 The Best, Worst and Weirdest of the Grammys
Next Up: Editor's Pick