When we first meet Fern in Nomadland, she’s living in a van and working at an Amazon Warehouse in Nevada. It’s Christmastime and the 61-year-old widow, played by Frances McDormand, is shopping at a sporting goods store when she sees some familiar faces from her old life in Empire, a company-owned mining town left abandoned months earlier as a casualty of the Great Recession. Before they part ways, a young girl who Fern used to tutor tells her that her mother says Fern is homeless. She wants to know if that’s true. “I’m not homeless,” Fern says. “I’m just…houseless. Not the same thing, right?”

Nomadland, written and directed by Chloé Zhao and hitting theaters and Hulu on Feb. 19, is based on a book of the same name by Jessica Bruder. The 2017 nonfiction book is a sweeping account of post-recession contemporary nomads like the fictional Fern. While researching the book, Bruder spent years following nomads across the country, and in doing so, showcased an invisible but significant portion of the American workforce. The author spent months living in a secondhand van, which she named “Halen,” in an effort to better understand her subjects, like Linda May and Swankie, who play themselves in the movie.

Nomadland’s loosely unfolding narrative follows Fern as she navigates life on the road, working several jobs, meeting and befriending fellow nomads and adjusting to her new normal. “The filmmakers refer to Frances as a docent, which I really love,” Bruder tells TIME. “She guides us down this road, and we meet all these people. We follow her narrative, but she’s also this backbone, and all these other things spoke off of her story.”

Like in Zhao’s previous films Songs My Brothers Taught Me and The Rider, the director cast non-professional actors, in this case real-life nomads, to play versions of themselves. In adapting the book for the screen, Zhao told Deadline that the real-life elements helped shape the character of Fern. “Everything happens simultaneously, because once we meet someone like Swankie, we realize she has to be in the film, and that informs the journey that Fern is going to take,” Zhao said.

The movie has gained significant awards buzz since it became the first film ever to take home the top prizes from both the Venice and Toronto Film Festivals, recently collecting four Golden Globe nominations, including Best Director and Best Motion Picture (Drama). TIME spoke to Bruder about the book and what it was like seeing the nomads she spent so much time with featured in a major movie. Here’s what to know about the real-life stories behind Nomadland, as well as the lifestyle at its center.

A book about survival

In 2014, Bruder wrote a cover story for Harper’s Magazine, “The End of Retirement,” which detailed the plight of older Americans who couldn’t afford to retire and worked temporary jobs for companies like Amazon. She built off that reporting and three years later published Nomadland: Surviving America in the Twenty-First Century. The book is centered on Linda May, a 64-year-old grandmother living in her secondhand Jeep who is working temporary low-wage jobs in order to save money to fulfill her dream of finding land to build a sustainable “Earthship” home. “One of the things that made Linda such a pleasure to document as a journalist was that she has a certain unselfconsciousness about her,” Bruder says. “Whether she was talking to me and being recorded or talking to somebody in a restaurant or some random people she just met because she always strikes up a conversation, she was always the same person.”

In accompanying Linda May on the road, Bruder illuminated the struggles felt by many middle class Americans in the aftermath of the recession who took to RVs and vans in lieu of a permanent address. In addition to living in a van, Bruder worked alongside her interview subjects, in workplaces from a sugar beet harvesting plant to an Amazon fulfillment center. She described the physical labor and the toll it took on these workers. “Some walk 15 miles on concrete floors, stooping, squatting, reaching and climbing stairs as they scan, sort and box merchandise,” she wrote.

The book, published by W.W. Norton, landed on several best of the year lists and was applauded for its dissection of both the American dream and the hemorrhaging middle class. A New York Times review described it as “brilliant and haunting.” The Washington Post ran a review by Timothy R. Smith, a former staff member of Book World turned nomad, who called it “devastating” and “revelatory.” Bruder, whose journalism is primarily longform narrative, enjoys the range of responses she gets from readers. “Some people who’ve read the book get in touch with me and say, ‘Oh my God, this is The Grapes of Wrath, people are staggering around, and other people say, ‘yeah, I can’t wait to go on a road trip, I’m fixing up a van,” she says. “That spectrum of experience makes me really, really happy because I want people to read it and not feel like I stuffed something down their throats.”

The real-life stars of the movie

While Bruder did not write the film adaptation, she helped supply research to Zhao. She tells TIME that she had primary source material that wasn’t used in the book, and she was able to introduce Zhao to some of the nomads she met while she was writing it. She remembers when Zhao asked her about what she thought of Linda May for the movie. “I didn’t necessarily know what would be good on the screen because I’m not a filmmaker, but Linda had this quality that made her really wonderful for me to work with that I hoped and thought might transfer to the screen,” Bruder says. The author still keeps in touch with the nomads from the book—they are all connected on Facebook and comment on each other’s photos often.

Along with Linda May, Swankie and Bob Wells also play themselves in the film. Swankie has been on the road for over 10 years—and her fictionalized counterpart strikes up a friendship with Fern before embarking on her own journey to Alaska. In an interview with Variety, Swankie spoke of the happiness she felt from participating in the project. “I felt more love from Fran and Chloé and the film crew than I felt from my own biological family. I can never really show my gratitude for that,” she said.

Wells has been a full-time camper for the last 12 years, and is the founder of the website Cheap RV Living, where he shares resources on how to live on the road. He also has a Youtube channel of the same name with more than 400,000 subscribers, where he provides helpful tips on everything from budgeting to the best van heaters to staying safe while living in a vehicle. His non-profit, Home on Wheels Alliance, funds programs that bolster the nomadic community.

These non-professional actors and their real-life stories guided the movie’s script. With a cast and crew of under 30 people, members of the production embedded themselves in the community and lived out of vans themselves for the months-long shoot. McDormand told Deadline that everyone worked together to learn about the lifestyle and make the movie together: “We were able to move very swiftly and improvisationally when necessary and live in the community of the van dwellers in a way that wasn’t disruptive but cohesive.”

In a recent interview with The Guardian, Bob Wells discussed the community of modern nomads, and why people are increasingly drawn to the movement. “If the Great Recession was a crack in the system, Covid and climate change will be the chasm,” he said. This lifestyle is not to be confused with “#vanlife”—a hashtag that populates Instagram feeds and accompanies photos of largely younger people traveling in vans. Bruder believes #vanlife is more of a brand than a movement. “There are people of all ages who are living in vans and then there are people doing #vanlife,” Bruder says. “For everybody who can actually make a living or enough to eat and put gas in the tank on the road as an influencer, there are thousands of people who would probably like to be doing that and cannot.”

Bruder recognizes, though, that the performative aspect of social media means that some people might be trying to make their experiences living in a van, whether temporary or not, appear more fun than their reality might be. She met younger people on the road who were out there due to parallel economic factors that drove older workers to workamping, like dealing with student debt and the rising costs of housing.

Bruder in the Sonoran Desert outside of Quartzite, Ariz. in December 2014
Courtesy of Jessica Bruder

The larger community of contemporary nomads, as captured in the film, are largely white older Americans. While most of the film is set in more conservative parts of the country, Zhao tried to depoliticize the story. “I tried to focus on the human experience and things that I feel go beyond political statements to be more universal—the loss of a loved one, searching for home,” she told Indiewire. Bruder reported the book under the Obama administration, but the systemic issues she underlines go back decades. “They’re not an issue of one administration or another, but a lot of people wanted the people in the book to be the angry Trump voters, and seemed almost disappointed when I told them there are a lot of people with different political opinions in this group,” she says. “They’re not that easily simplified.”

The resonance of Nomadland

While she hopes that the movie’s relevance will be long-lasting, Bruder finds it particularly timely right now, for two reasons. One is the escapist nature of the cinematography, which offers a journey around the U.S. for viewers who have not been able to travel for nearly a year. The other is the emotional journey of Fern’s character, which may be relatable to audiences struggling with the burdens the pandemic has introduced. “Fern has a certain control in not having control of her life,” she says. “There is a sort of constrained agency, she’s dealing with the limitations around her, but also carving her own path.”

Bruder’s own van has been grounded in a friend’s yard in Reno, Nev., and she hasn’t been able to access it during the pandemic. Though she notes that she now thinks of the time she spent in the van with “rose colored glasses,” she misses it and wishes she had her van, especially during last summer. “There were moments where I was out there and reporting and I was anxious or exhausted or cold, but now when I look back at it, I see those vistas, and I think about being on the road and I think about the joy parts, quite a bit,” she says.

Bruder was able to reconnect with the nomads from the movie when the film premiered at the Telluride Film Festival last September. The festival hosted a drive-in screening of the movie in Los Angeles. “We were wearing N-95 respirator [masks] while ashes were falling from the sky. But Linda was there, and Swankie and Bob,” Bruder says. “Seeing them do the Q+A on stage with Frances and Chloé choked me up, just as much as seeing them on screen.”

The original version of this story misstated the name of Jessica Bruder’s van. She named the van “Halen,” not “Van Halen.” 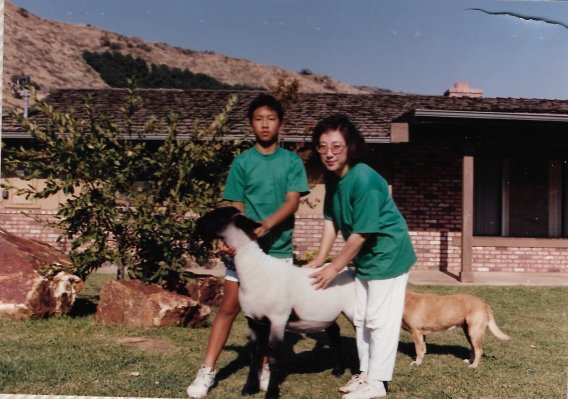 Korean American Farmers on 'Minari'
Next Up: Editor's Pick