The Funny, Probing Dick Johnson Is Dead Is Unlike Any Other Documentary That’s Come Before

There is no way to mourn a parent in advance, but that doesn’t stop some of us from trying. When documentary filmmaker and cinematographer Kirsten Johnson noticed a decline in the health of her aging father, Dick, living alone in Seattle and still working at his lifelong profession as a psychiatrist, she opted to move him to New York, where she’d be better able to take care of him. At the same time, finding herself unable to imagine life without him, she decided to enlist him in a playful experiment: she’d use her filmmaking skills—and a cadre of helpers including set designers and stunt, makeup and sound people—to create fake death scenarios in which Dick would star. Making an absurdist film in which her father would seemingly die but also come back again and again would be one way to allow him to live forever. The result is the sometimes funny but often probing documentary Dick Johnson Is Dead, now streaming on Netflix, and although it focuses on one particularly close and joyful father-daughter relationship, it’s bound to resonate with anyone who has watched, and worried, as a parent ages.

Dick Johnson is an affable guy with an easy laugh and a wry sense of humor, qualities his daughter shares: sometimes we see her in the frame, but more often she’s off-camera, explaining to her father what they’re going to do next, or asking him a seemingly direct question and then laughing at his intentionally off-kilter answer. Johnson has built a solid career as a cinematographer, and has directed several films as well: Her 2016 documentary Cameraperson is both a memoir and a visual essay about what it means to view life through a camera lens. Johnson’s mother (footage of whom appears in Cameraperson) died in 2007, living the last years of her life with Alzheimer’s. Dick carried on, until Johnson and other family members were made aware of certain problems: at work, he’d been double-booking patients; behind the wheel, he ploughed through a construction site and kept on driving as if nothing had happened. Johnson knew it was time to intervene, and Dick Johnson Is Dead includes several scenes that show how wrenching it can be to deprive a formerly independent adult of certain freedoms. In one sequence Johnson explains to her father, off-camera, that she must sell his car before the move to New York; maybe he’ll drive again, but probably not. Johnson began working on the film in 2017, and as it progresses, Dick suffers some memory loss, and will eventually slide into dementia. At one point he acknowledges his dependence on his daughter, referring to himself as her “little brother,” whose job is to simply “tag along.” It’s a funny observation, but a piercing one too.

Mostly, though, the gallows humor shared by Dick and his daughter makes a good leavening agent, as Johnson sets up elaborate kicking-the-bucket scenarios for her father to play-act: He’s accidentally whacked with a beam by an absent-minded construction worker, causing a spray of obviously fake blood to spew from his neck. He tumbles—but not really—down a flight of stairs and lands unconscious at the bottom, faking serious injury. He gets beaned by a falling air-conditioner that is, in actuality, a movie prop. The point of these exercises is to acknowledge the certainty of actual death while reveling in the fact that this time, at least, it’s not real. It’s also a project that father and daughter could work on together, a small distraction for Dick as Johnson gets him resettled in a new life. This is both a work of catharsis and generosity.

Dick Johnson Is Dead is an odd and novel film—there has never been anything like it, and it’s not something that could be easily imitated by anyone else. Its tones shift gently, like the rocking of the sea. One minute it’s fanciful: Johnson has concocted a magnificent heaven for Dick to inhabit after death, an afterlife grown-up-kid’s party replete with fountains of bubbling chocolate (Dick is a big fan of chocolate), famous dinner guests like Frida Kahlo and Buster Keaton (strangely convincing even though they’re just regular humans wearing big cardboard masks) and, most significantly, the presence of Dick’s wife and Johnson’s mother, looking young and vital (her face, too, is represented by one of those cardboard masks). Dick was born with deformed toes, something he’d been self-conscious about his whole life. In the heaven Johnson has concocted for her father, Jesus pours magic water on his feet, rendering them perfect. Then Dick and his wife—represented by dancers with lithe, youthful bodies, wearing cardboard masks of the duo’s younger selves—perform a rapturous Fred-and-Ginger style dance in evening clothes and bare feet. If this is heaven, who can wait to get there?

Kirsten and Dick Johnson in a scene from 'Dick Johnson Is Dead'
Barbara Nitke/Netflix—© 2020 Netflix, Inc.

Yet one of the movie’s more willfully macabre moments presents some murky problems. Johnson stages a mock funeral for Dick at the Seventh-Day Adventist church he has long attended—he climbs inside a casket and folds his arms beatifically, ready for his close-up. During the service, Dick’s friends speak fondly of him—it’s a fulfillment of the classic fantasy of being present at your own funeral and bearing witness to all the nice things people might say about you. Johnson presents the faux-service ambiguously: At first we’re not sure if Dick really has died. But then we see him and Kirsten watching the whole thing from the back of the church, laughing through parts of it. And while this may be giving away the ending, as of the completion of the film, Dick Johnson is still with us.

But during the fake funeral, one of Dick’s oldest friends gets up to read a text and can barely get through it. He knows the service isn’t real—we’ve seen him, earlier, dismayed at the sight of his friend in the coffin but reminding himself, nervously, that it’s all just a movie. Even so, when the service begins, he’s overwhelmed by sorrow. Later, Johnson and her father emerge from the back of the church, smiling and laughing and striding forward to greet the guests. But Dick’s old friend is nowhere to be seen. Johnson shows him, alone in another part of the church, head bent, still crying. He’s in on the joke, yet he can’t bear the joke. This man’s suffering is very real to him, even if there’s no need for it yet.

One of Dick Johnson's many fake deaths
Netflix

This is a complicated moment, from a documentarian’s vantage point but also from a viewer’s. Johnson certainly didn’t intend to be cruel. Perhaps she’s merely stressing the idea that when Dick really is dead, his loss will be particularly devastating to some. And perhaps she simply didn’t resolve the moment as gracefully as she might have. At one point Dick asks his daughter, with characteristic jocularity, why she doesn’t make fiction films, “where the big bucks are.” Johnson tells him that real life is often much more fascinating than anything you can make up.

But even a documentarian—as Johnson knows better than anyone—isn’t just turning the camera on and capturing real life. There are decisions to be made, things to show and things to cut; a documentary about real people is a shaped vision of real life. Dick Johnson’s death isn’t, for now at least, real. But his friend’s grief, as it’s revealed to us, is. Johnson and her father share a sense of humor, and the bond between them informs the finest moments of Dick Johnson Is Dead. Yet I can’t stop thinking about the friend crying, alone, in the church, so verklempt he forgot he was in a movie—one place where this documentary’s joyful dark humor isn’t as amusing as it should be. 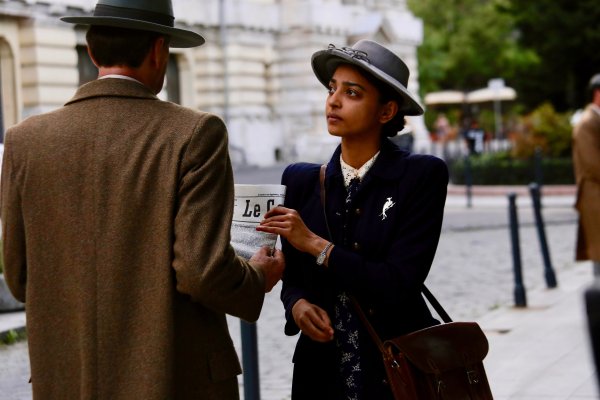 Inside the Stories of the Most Daring Women Spies of World War II
Next Up: Editor's Pick