Sacha Baron Cohen: We Must Save Democracy From Conspiracies

Conspiracy theories and misinformation on display at anti-lockdown rally in Huntington Beach, Calif., May 1, 2020.
Jamie Lee Curtis Taete
Ideas
By Sacha Baron Cohen
Baron Cohen is a comedian, actor and screenwriter. He appears in the upcoming films The Trial of the Chicago 7 and Borat Subsequent Moviefilm: Delivery of Prodigious Bribe to American Regime for Make Benefit Once Glorious Nation of Kazakhstan

A few times in my career, I have genuinely feared for my life.

In Arkansas, I posed as an ultimate fighter at a cage match and challenged anyone in the audience to take me on. When my fake ex-boyfriend volunteered, we engaged in some heavy petting, triggering a near riot. The crowd—including some recently paroled prisoners with swastika tattoos—erupted in homophobic slurs and started hurling metal chairs at us. Had I not ducked into a trapdoor and out an escape tunnel, I think the crowd would have beaten me senseless.

Moments like that are frightening. Today, though, I’m truly terrified—for the survival of democracy itself.

A year ago, I spoke out publicly for the first time in my own voice because I feared that our pluralistic democracies were at risk of being destroyed by a flood of hate, lies and conspiracies spewed by demagogues and spread by social media. Since then, this toxic brew has exploded into the open and—with just weeks until the election—these conspiracies threaten to kill democracy as we know it.

For most of my career, I’ve been reluctant to take a public stance on the issues of the day. I’ve felt more comfortable in character—or in a mankini. Yes, a lot of my comedy is uncomfortably pubescent. But when it works, satire can humble the powerful and expose the ills of society. As Abbie Hoffman, who helped lead the 1968 protests against the Vietnam War during the Democratic convention in Chicago, liked to say, “Sacred cows make the tastiest hamburger.” By getting people to reveal what they really believe, I have at times exposed the ignorance, bigotry and conspiratorial delusions that often lurk just below the surface of our modern lives.

Protesters calling for a reopening of California from coronavirus lockdown measures and restrictions in front of City Hall in Los Angeles, May 24, 2020.
Jamie Lee Curtis Taete

Using unhinged lies and conspiracies to gain power and subjugate others is, of course, nothing new. The blood libel—the myth that Jews murdered Christian children and used their blood for religious rituals—is the world’s oldest conspiracy, dating back to the Middle Ages. The lie that Black people are genetically inferior or inherently violent is at the core of white supremacy. The lie that women are biologically or mentally unequal to men—to be treated as property and body-shamed—has perpetuated millennia of patriarchy. The lie that there is an epidemic in the U.S. of babies being executed shortly after birth has helped fuel state bans on abortion, even in the case of rape or incest.

Today, however, is a uniquely dangerous moment. Donald Trump—who averages 23 lies a day and is the world’s greatest superspreader of coronavirus conspiracies—has caught the virus himself. He has a dutiful ally in Facebook—the greatest propaganda machine in history. And this is a time when Americans are especially vulnerable to lies and conspiracies. This trifecta has created a whirlwind of conspiratorial madness.

First, trailing in the polls, Trump clearly believes that his only hope for political survival is to spin an alternate universe: Beijing deliberately spread the “Chinese virus,” we’re told, “Don’t be afraid of Covid,” and the election is “rigged” unless states “get rid of” mail-in ballots. It’s as if we’re in the final days of the Age of Reason—the Enlightenment-induced commitment to evidence, science and objective fact. “Truth isn’t truth,” the President’s lawyer Rudy Giuliani has said, and facts are “in the eye of the beholder.” We are told, without any sense of Orwellian irony, to deny the very existence of our external reality.

Second, the Demagogue in Chief has a willing accomplice in Mark Zuckerberg’s Facebook—a megaphone that history’s worst autocrats could only dream of. Its algorithm deliberately amplifies content that generates more engagement—and as one unnamed Facebook executive recently told Politico, “Right-wing populism is always more engaging” because it triggers “anger, fear” and “an incredibly strong, primitive emotion.” Not surprisingly, most days the top 10 Facebook posts are overwhelmingly from right-wing pundits and outlets.

A protestor's sign at a rally calling for the reopening of California from coronavirus lockdown measures in Los Angeles, May 24, 2020.
Jamie Lee Curtis Taete

Facebook largely refuses to fact-check political ads and posts—which it then microtargets to voters. And Facebook still hasn’t taken down Trump’s “when the looting starts, the shooting starts.” Astonishingly, Facebook continues to give a platform to white supremacists and Holocaust deniers. It’s as if the satirist Jonathan Swift foresaw the awful power of social media when he said, “Falsehood flies, and truth comes limping after it.”

Third, all these lies couldn’t come at a worse time. Studies show that people are especially susceptible to conspiracies in periods of great uncertainty when they feel a loss of control over their lives and want answers to make sense of the world. Over the years, I’ve filmed people, who otherwise seemed to be good and decent, repeating lethal conspiracies—regurgitating the diet of lies that they have been fed hourly on social media.

In recent months, millions of people viewed a conspiracy video claiming that face masks can cause coronavirus before Facebook and YouTube eventually took it down. On Oct. 6, Facebook finally banned QAnon—the bonkers conspiracy theory that Trump is battling a cabal of Satan-worshipping pedophiles (mostly Democrats and celebrities) who drink the blood of children, an unmistakable echo of anti-Semitic blood libel—but not before pushing it to millions of Americans and people around the world. The shared reality upon which democracy depends has been shredded.

It would all be hilarious if it weren’t so dangerous. In his famous experiment in the 1960s, the Yale psychology professor Stanley Milgram found that when instructed to do so by a perceived authority figure, most people complied and administered what they believed were dangerous electric shocks to a person in the next room, even as they heard the “victim” (an actor) scream in pain. On my show Who Is America?, I convinced a man who believed Trump’s conspiracies to visit a women’s march in San Francisco and push a button that I told him would kill a person who he thought was an “antifa terrorist.”

For his supporters, Trump is the authority figure whose cues they will follow. With his history of inciting violence and emboldening militias and white-supremacist groups and dozens of cases where his supporters have attacked innocent people in his name, we’d have to be the real fools not to see the perils ahead. The violent clashes between Trump supporters and protesters in Portland, Ore., were a preview of how a contentious election could spiral into violence.

Conspiracies are lethal—to our health and to our democracy—and Election Day is now only weeks away. Even as Trump is being treated for COVID-19, he continues to rage-tweet lies and conspiracy theories so fast, it’s virtually impossible to correct them all. Although it removed one misleading Trump post about coronavirus on Oct. 5, Facebook has repeatedly failed to block other disinformation and refuses to implement systemic reforms advocated by the Stop Hate for Profit campaign, of which I am a part.

The fate of U.S. democracy now rests with voters and whether they stand up in record numbers and choose truth over lies. As protesters outside the 1968 Democratic convention chanted after they were brutally beaten by police, “The whole world is watching”—and this time it’s to see whether our planet’s oldest democracy will endure or slide into autocracy.

While filming my latest Borat film, I showed up as a right-wing singer at a gun-rights rally in Washington State. When organizers finally stormed the stage, I rushed to a nearby get-away vehicle. An angry crowd blocked our way and started pounding on the vehicle with their fists. Under my overalls, I was wearing a bulletproof vest, but it felt inadequate with some people outside toting semiautomatic weapons. When someone ripped open the door to drag me out, I used my entire body weight to pull the door back shut until our vehicle maneuvered free.

I was fortunate to make it out in one piece. The next few weeks will determine whether America will be so lucky. 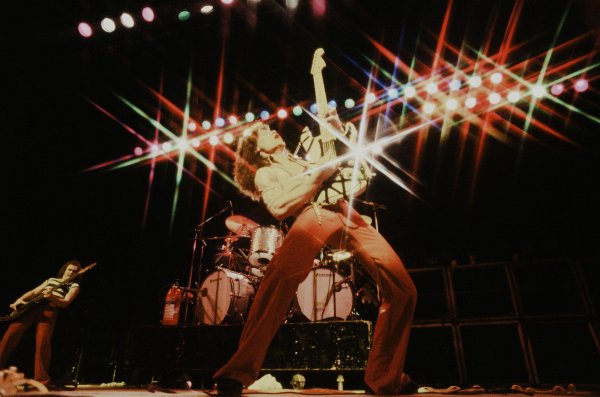 'It Was Always Just the Joy.' Gene Simmons on the Talent and Soul of Eddie Van Halen
Next Up: Editor's Pick