The Iowa Caucuses Devolve Into Chaos, With No Winner on Election Night

The voters have finally spoken, but nobody knows what they said.

The first election of 2020 devolved into chaos Monday night as the results of Iowa’s Democratic caucuses were delayed over technical problems, throwing a pall over the legitimacy of the first-in-the-nation contest and enveloping the race in uncertainty.

Lacking clarity, the candidates rushed to spin a non-existent result in their favor. Pete Buttigieg all but declared victory. Bernie Sanders released internal tabulations that showed him ahead. Elizabeth Warren’s campaign claimed a top-three finish. Amy Klobuchar’s campaign manager said she ran “even or ahead” of former Vice President Joe Biden. And Biden’s lawyer cast doubt on the validity of the eventual results.

It was a calamity that verged on farce. The candidates poured tens of millions of dollars into Iowa, hired hundreds of staff and deployed thousands of volunteers, only to watch it end in a muddle. At 1 a.m. Central Time, the state party told reporters it expected to have results to announce later Tuesday and cast the disastrous delay as an attempt to ensure integrity. “We want to emphasize that this is a reporting issue, not a hack or an intrusion,” Iowa Democratic Party Chairman Troy Price said.

The confusion seemed likely to benefit Biden, the national front-runner who appeared to have underperformed based on anecdotal reports but was spared a brutal storyline when the caucus snafu overshadowed the outcome. It dealt a blow to whoever the winner turns out to be, whose usual victory bounce will be blunted by the delayed result. It fed a spate of conspiracy theories on social media that could undermine confidence in any result that is eventually announced. And it could spell the end of Iowa’s first-in-the-nation status, as a caucus process that critics have castigated as antiquated comes under heightened scrutiny.

A representative from the Iowa Democratic Party said the delay was due to “quality checks” and complications involved in processing data from nearly 1,700 precinct sites around the state. For the first time in 2020, the party planned to report three sets of numbers: voters’ initial candidate preferences, their final candidate preferences, and the number of state delegates awarded. The party relied on a new app to compile the results but had to resort to more old-fashioned methods amid widespread resorts of crashes and glitches. Phone lines were tied up for hours and confusion reigned.

“We found inconsistencies in the reporting of three sets of results. In addition to the tech systems being used to tabulate results, we are also using photos of results and a paper trail to validate that all results match and ensure that we have confidence and accuracy in the numbers we report,” said Iowa Democratic Party communications director Mandy McClure. “This is simply a reporting issue, the app did not go down and this is not a hack or an intrusion. The underlying data and paper trail is sound and will simply take time to further report the results.”

The chaos produced a bizarre election-night tableau, with a succession of candidates taking the stages at their respective event spaces to deliver triumphant speeches without knowing the final tally.

“I have a strong feeling that at some point the results will be announced,” Sen. Bernie Sanders, one of the projected caucus front-runners, told his supporters in Des Moines. “And when those results are announced I have a good feeling that we’re going to be doing very, very well in Iowa.”

Sanders’s campaign released a memo early Tuesday that it said represented results from nearly 40% of precincts statewide, showing him in the lead. Meanwhile, a senior Buttigieg aide claimed that the campaign’s precinct captains indicated the former South Bend, Ind., mayor was on course to win the state delegate equivalent count.

“It’s a mess,” Warren campaign manager Roger Lau told reporters at the Massachusetts senator’s caucus night party in downtown Des Moines. “But we feel confident that it’s close at the top – Warren, Sanders and Pete Buttigieg. I believe the vice president [is] a distant fourth based on the data we have.”

The candidates sought to forge ahead despite the unforeseen hiccup. As supporters chanted “I-O-W-A, MAYOR PETE ALL THE WAY,” Buttigieg gave an eloquent speech about unity and belonging as he boasted of a “new American majority.”

“Tonight, an improbable hope became an undeniable reality,” he said. “We don’t know all the results, but we know by the time it’s all said and done, Iowa, you have shocked the nation. Because by all indications, we are going onto New Hampshire victorious.”

But despite the triumphalism, it appeared as though the drama had robbed Buttigieg of what could have been a transformative moment for his campaign. Asked whether the confusion had stolen Buttigieg’s moment, senior strategist Lis Smith replied: “What do you think?”

Dr. Andy McGuire, chair of the Iowa Democratic party from 2015 to 2017, told TIME she was “stunned” about the mishap. She demurred when asked if the embarrassment would threaten Iowa’s position as the lead-off state in the presidential nominating process.

“I think they are doing their best and I think it is too early to draw any conclusions,” McGuire said.

The Biden campaign claimed that the confusion threatened to delegitimize the ultimate results. “A lot of people are already angry with the Iowa caucuses because we are not a diverse state. And this happens,” says Rob Tully, former Iowa Democratic Party chairman and a precinct captain for former Vice President Joe Biden. “The party’s incompetence is the headline of the night.”

Write to Alex Altman at alex_altman@timemagazine.com and Molly Ball at molly.ball@time.com. 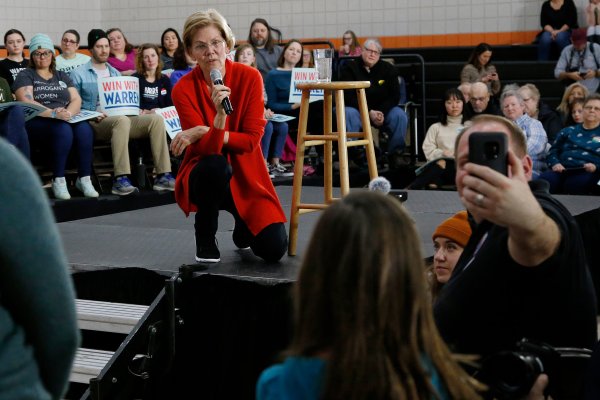