Why Elizabeth Warren Connects With Young Girls in Iowa

Childcare can be an obstacle for Iowa caucus-goers who have kids, but 14-year-old Evelyn Bergus has a plan for that. The Iowa City eighth-grader and her friend will provide free caucus night babysitting at Elizabeth Warren’s Iowa City field offices, including story time, a Disney movie, and Annie’s Cheddar Bunnies and fruit snacks.

“I knew that I couldn’t caucus, but I wanted to do more than just sit at home or observe,” says Bergus, adding that she is “officially Red Cross babysitter certified.” She says she’s expecting roughly seven kids in her care, but that drop-ins are welcome, so there may be more.

“We’re offering it completely free, no strings attached,” says Bergus, whose mother, an Iowa City councilwoman, has endorsed Warren. “I think it really speaks to Elizabeth Warren’s plan and how much she will improve the cost of childcare.”

Warren’s campaign itself is not organizing childcare for caucus-goers statewide on Monday night. But as Warren seeks to prove her case in this crucial first-in-the-nation caucus, the girls of Iowa are watching—and more than a few of them are pitching in to help.

Carolyn Bruck, a 14-year old eighth-grader who loves K-Pop and art class, helps her mother, a Warren precinct captain, phone bank and rally their friends and neighbors. She says she wants a president who “understands women’s struggles and can properly reflect those in the White House.”

Lydia Mahlstadt, an 11-year-old sixth-grader who loves swimming and volleyball, has added writing postcards for Warren to her household chores. On caucus night, she plans to make posters and “probably hand out stickers.”

“Sometimes women are put below men, and we’ve never had a woman president before, so I think it would be really cool to have a woman,” she says.

Lydia’s dad, Warren precinct captain Nick Mahlstadt, says that “it sets that tone that it’s possible: it’s not just something we talk about, it can actually be done.” The father-daughter duo introduced the Senator at her Indianola event on Sunday.

Even in a jam-packed schedule squeezed even tighter by her duties at President Trump’s impeachment trial, Warren is making time to talk with children, many of them girls, who come to events to see a woman presidential candidate. While she’s paused her all-access selfie lines, she’s continued doing smaller ones just for kids and families.

Ahead of Warren’s event in Ames on Sunday, dozens of kids squirmed with their parents as they waited in a single-file line as if they were waiting for Santa Claus. When she finally emerged from behind a curtain, someone screamed, “There she is!”

“I can’t take a selfie with everybody,” Warren told them. “But I had to do it with everyone who’s not yet of voting age.”

After a brief meeting with the Senator, during which her six-year old sister chewed on her shirt, Genevieve Cook, age 8, found time to share her career aspirations: “Teacher,” she says. “Or President.”

Josie Ybarra-Rojas, age 6, added that she, too, wanted to be President, on a platform of “making a rule so that dogs can’t get their ears and tails trimmed.”

Warren also made time in Ames to meet 6-year-old Maddie O’Donnell and her sequined unicorn, Cutie. “She said, I need your help in this fight,'” recalls her mother, Jamie O’Donnell. Yesterday, Maddie wanted to be a police officer: today, she says, she wants to be “a president.” Maddie added an additional readout from the brief meeting: “She said she liked my glasses,” she whispered.

“Sharing a moment and making a connection with children and families is essential to the way Elizabeth is running her campaign,” said Warren spokesman Jason Noble. “Elizabeth knows what she’s fighting for and who she’s fighting for because she sees them in every photo line, in every note slipped into her hand, and every pinky promise to remind a little girl that she can be whatever or whoever she wants to be.”

It’s a message that may become muddled if Warren’s campaign flounders. But if that happens, her supporters say, the message to the young girls who meet her is no less resonant.

“Elizabeth Warren herself tells us what we need to do if we don’t win,” says Sabrina Sheilds-Cook, the mother of presidential hopeful Genevieve. “We persist. We get back up and keep fighting.” 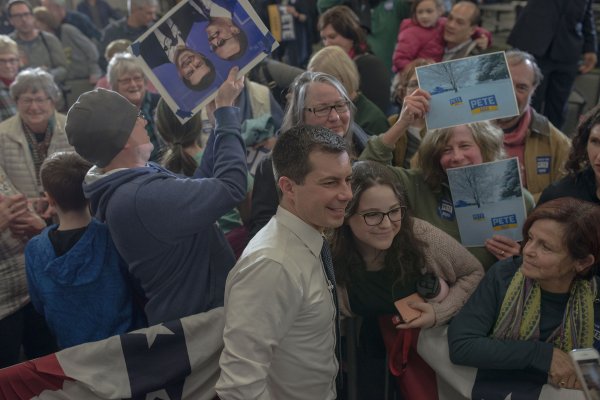 How Being Gay Shaped Buttigieg's Campaign
Next Up: Editor's Pick