Sam Caughron, a sprightly 17-year-old member of Waterloo’s Youth City Council, had a busier-than-usual Saturday. He ventured first to a rally hosted by former South Bend, Ind., Mayor Pete Buttigieg in the morning, and then hit up one headlined by Minnesota Senator Amy Klobuchar in the evening. But he can’t decide which candidate deserves his support.

“Buttigieg was impressive,” he argues, “but I want to elect a woman really bad.” Whoever Caughron selects will need to be a “candidate whose policies can get done in their four or eight-year term,” he adds. (Caughron will turn 18 by Election Day, making him eligible to caucus.)

At jam-packed rallies in Cedar Falls and Des Moines on Saturday night, Klobuchar tried dutifully to win over the support of people like him. Though she was constitutionally obligated to participate in President Donald Trump’s Senate impeachment trial in Washington during the crucial two weeks leading up to the Iowa caucuses, she didn’t spend much time dwelling on the historic moment that had kept her away. Instead, she wanted to talk about the kitchen table issues afflicting working and middle class families across the state—some of which had plagued her own family.

Her father’s alcoholism is just one example. By the time Klobuchar got married, she told the exuberant crowd of 200-plus people, her dad had been charged for driving while intoxicated three times. “At that moment, the judge said to him, you’ve got a choice, treatment or jail, and he chose treatment,” she said. “I think everyone, whether they’re dealing with opioids or meth, or whether they’re dealing with crack cocaine or alcoholism, have that same right.”

Though Klobuchar’s dad, 91, is sober now, he’s facing another dilemma that cropped up in Klobuchar’s speech Saturday: her dad is running out of long term care insurance money and will soon need to leave the senior group home where he currently resides. Since that facility doesn’t accept Medicaid, he’ll have to move to a different community when his savings dry up.

“Our story is actually so much better than so many other families,” Klobuchar admits, “because there’s so many people my age and younger, who are taking care of their own kids and at the same time, want to make sure that their aging parents are taken care of. Why we’ve done nothing—zero, zilch—on this issue is beyond me.”

Amid audience cheers and chuckles, Klobuchar delved into policy details on how to solve the long-term care problem. She pledged to keep Social Security solvent, double the funds Pell Grant recipients are allocated, double the income limit that determines Pell Grant eligibility, and make it easier for students who take out college loans to pay them back. She also promised to address the nation’s lack of mental health resources. There are only 64 public mental health hospital beds in Iowa, she said.

In the final push before the caucuses, Klobuchar seems more determined than ever to widen the ideological divide between her own, pragmatic platform and those of her competitors who lean further left. “They are not going to agree with every single thing we say on the debate stage,” she says of the 31 Iowa counties who voted for former President Barack Obama in 2008 and 2012, but opted for Trump in 2016.

“Even I don’t agree with everything that has been said on the debate stage,” she quips. “This is a big tent. This is about a fired up democratic base, but it is also about independents and moderate Republicans.”

Senator Amy Klobuchar got a brief reprieve from her Senate impeachment trial duties to jet into Iowa for the final days leading up to Monday's Iowa caucuses.
Elijah Nouvelage/Bloomberg via Getty Images

That middle-of-the-road approach resonates with Tom Stively, a retired high school counselor who now tutors students before their college entrance exams. He is especially amped up about Klobuchar’s plan to make two-year college free, versus the more radical proposals that pledge to make all public college free while also eradicating student loans.

“I had a number of students go to community colleges,” he says. “They got some classes out of the way and they kind of found themselves.”

Stively also thinks a President Klobuchar would be more effective than some of her competitors in getting Congressional Republicans to pass legislation. “When Warren and Sanders scream about things, it’s going to create a division. Republicans aren’t going to sit back, there are going to be battles,” he says. “I don’t think that would happen with Amy.”

The path to the White House, though, means she first must win the nomination. For now, she’s still a long shot. In Iowa, Klobuchar is polling at 10%, according to a compilation of reputable surveys tabulated by Real Clear Politics. Nationally, she averages less than 5%.

It’s clear, however, that Klobuchar’s momentum—or Klomentum, as some of her fans say—is building. At the conclusion of the Cedar Falls event, Klobuchar received a standing ovation.

Two hours later, she attracted a crowd of more than 700 people: her largest rally size yet. When she finished her pitch, dozens of audience members began chanting her name. Simultaneously, my pocket buzzed. It was a text from Caughron, the teen from Waterloo I’d met earlier.

“I am going to be caucusing for Amy Klobuchar!” it read. 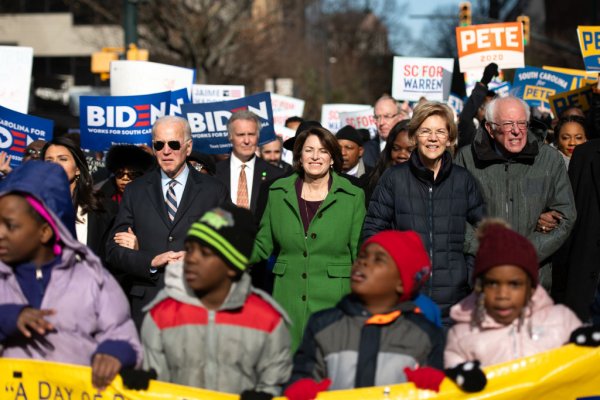 Michael Bloomberg Will Join Tonight's Democratic Primary Debate in Nevada. Here’s What to Know
Next Up: Editor's Pick