Five days out from the Iowa caucuses, the race feels like a birthday party without the guests of honor. Three of the top five contenders are stuck in Washington, confined to the Capitol for the impeachment trial of President Donald Trump.

Which has created an opening of sorts for Andrew Yang.

A candidate’s time in the state should be the “decisive criterion” for Iowa Democrats weighing who they’ll support, the entrepreneur quipped Wednesday morning. For more than an hour Wednesday morning, the candidate—who is tied for sixth place in the polls—held court with roughly two-dozen reporters in Des Moines, weighing in on the others’ absence, prospective alliances with rivals and why Democrats are underestimating the appeal of his campaign.

“We all know it’s a disadvantage, they know it’s a disadvantage. I feel terrible for them. I feel terrible for them in part because I know they want to be here,” Yang said of Senators Amy Klobuchar, Bernie Sanders and Elizabeth Warren, all of whom are leading Yang in the Iowa polls, but stuck in Washington for the duration of the trial. “Imagine knowing you want to be in Iowa talking to voters, furthering this campaign that you’ve been working towards in many cases for years or even decades and you’re, you know, not here.”

Some other Democratic campaigns, Yang said, have reached out to his staff to ask how his campaign plans to direct its enthusiastic supporters, known as the Yang Gang, if he fails to crack the 15% threshold for viability in Iowa precincts. But Yang said that his campaign has not yet committed to any other candidate.

“My team will sort out what the heck is being conveyed, and then they’ll sit me down,” he said, adding that, even without guidance, many of his supporters would “naturally head to Bernie.”

“I think that Bernie and I do have a lot of overlap in support,” he said. “So it wouldn’t be surprising to me if many of our supporters head [in] that direction.”

In the meantime, Yang plans to double down on winning new supporters. Yang is in the middle of a 17-day Iowa bus tour, which earlier this week featured a cameo by Dave Chappelle. The other top-polling Democratic candidates, former Vice President Joe Biden and and former South Bend, Ind. Mayor Pete Buttigieg, in Iowa this week are enjoying the less crowded field. Biden is in the midst of his own “Soul of the Nation” bus tour and Buttigieg is hosting nearly two-dozen campaign events in less than a week.

The absent senators, meanwhile, are relying on surrogates to do their bidding. Klobuchar has US Olympic Gold Medal Curling Coach Phill Drobnick campaigning for her. The Vampire Diaries’ Kendrick Sampson showed up at a Sanders field office to talk to volunteers last night. And former presidential candidate Julián Castro is crisscrossing the state on Warren’s behalf.

Yang, who has run a quixotic campaign centered on a call for Universal Basic Income, argued Wednesday that the Democratic party has been “slow on the uptake” in understanding his campaign and its support, though his poll numbers hover around 3% in Iowa. He is doing slightly better in New Hampshire, which will go to the polls on Feb. 11 and where his campaign, he says, has a “natural home.” Yang is also the only candidate who failed to qualify for the January debate stage but will be returning to the stage for the February 7 one in New Hampshire.

At the Wednesday morning breakfast event, which was hosted by Bloomberg News (an outlet owned by one of the other presidential candidates), Yang parried with reporters and handed out copies of his book. It’s unclear what the future of his campaign is, but he’s enjoying the attention while it lasts.

TIME has updated the headline to clarify that Yang’s comments reflected the state of his campaign in Iowa. 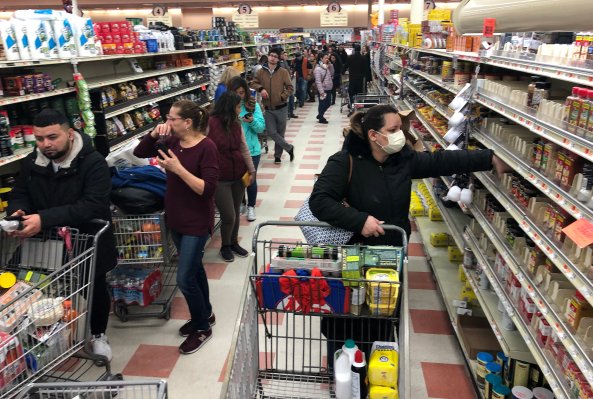