Pete Buttigieg's Closing Argument in Iowa is All About Tone

Some candidates run on policy. Others run on nostalgia. Pete Buttigieg’s unlikely presidential campaign is all about story.

More than any of his Democratic rivals, Buttigieg has rooted his bid in the power of narrative, betting that voters are sick of partisan bickering and ready to hear a new vision about healing America’s divisions. His is a campaign of imagery, themes, and characters, a reassuring bedtime tale for voters who feel caught in a waking nightmare. The policy debates that dominated much of the race have faded into the footnotes, emerging when he’s asked but rarely central to his pitch.

Instead Buttigieg, the multilingual son of an English professor and a linguistics professor, has returned his campaign’s first language: a message of belonging and healing. That message—the one that has so far lifted Buttigieg from the unknown mayor of South Bend, Ind., to a serious presidential contender—emphasizes hope and unity. He talks about a country that can “put the chaos behind us” and “turn the page” to a “new chapter,” that rejects the “old playbook” and stops focusing on “who said what when.”

“Our message about belonging is designed to make everyone feel welcome, and my own search for belonging of course partly has to do with being different because I’m gay,” he told TIME in an interview Saturday afternoon as he drove from Dubuque to Anamosa on Saturday. “But it’s also part of what motivates me to help make sure anybody who’s been made to feel on the outside knows that they have a home in this campaign.”

That has meant reaching out to Republicans as well as Democrats, conservatives as well as liberals, the politically alienated as well as political activists. His narrative is one of an America that’s big enough to include even those who vehemently disagree, a nation that can be healed through forgiveness, not retribution. It’s classic big-tent politics, at a moment when much of the nation seems more wrapped up in drawing distinctions than in finding common ground.

“A big part of why the presidency matters is the tone that it sets,” he told TIME. “There’s no office like the Presidency when it comes to setting the overall tone and sending the overall signals about what kind of country we are.” In a 30-minute interview, Buttigieg used the word “message” 12 times.

As he crisscrosses Iowa, visiting high school gyms and community centers and hotel ballrooms, he urges crowded rooms to think of the “image that guides this whole campaign,” which is “the moment when the sun comes up, and for the first time, Donald Trump will not be president of the United States.”

It’s the political equivalent of “Once Upon a Time.” Gone is talk of policy specifics: he still mentions Medicare-for-All-Who-Want-It, climate change and college affordability, but it’s rarely central to his stump speech. He talks less about his fiscal or foreign-policy agenda and more about an emotional agenda of addressing mental health, curbing the opioid crisis, and reducing “deaths of despair.”

Buttigieg’s campaign is far more focused on healing what he calls a “crisis of belonging.” It’s a tonal problem as much as a political one.

“Donald Trump is the master of the politics of exclusion and the politics of wedge issues and the politics of pitting people against each other,” says Mike Schmuhl, Buttigieg’s campaign manager. “We firmly believe that most Americans want to have a future where they’re together and they feel like they’re united. They can disagree on a bunch of stuff, but that we’re in this together in the American project.”

It’s a big bet that needs to pay off in Iowa—or the campaign risks collapsing altogether. Buttigieg’s central pitch is that he can woo waffling conservatives and disaffected Trump voters back to the party. Iowa, with its Midwestern sensibility and aging white population, is Buttigieg’s first and best chance of proving his case. If he can’t show that the unity message works here, it will be harder for him to argue his case as he heads into more diverse and progressive states where he has less of an organizational foothold.

“It’s going to be very important for us to show well in Iowa and New Hampshire,” Buttigieg says.

Winning over a group Buttigieg calls “future former Republicans” is central to that strategy. His latest swing through Iowa has emphasized counties that voted for Presidents Obama and then Trump, and his campaign has focused on courting conservative volunteers to reach out to their networks to caucus for him, a strategy called “relational organizing” that emphasizes personal connections over cold canvassing. The campaign has said that 45 of their precinct captains are current or former Republicans.

“He’s the most reassuring [candidate] at a time when people are tired of waking up and seeing the tweets, getting so freaking pissed off by the time you’ve had your coffee,” says Scott Matter, a former regional political director for the Republican National Committee who is now a precinct captain for Buttigieg near Ankeny, a Des Moines suburb. “I think people want somebody they can look up to again. You don’t have to be worried he’s going to say something that’s going to embarrass your children.”

“We don’t think you can win a general election by telling people that they don’t belong if they don’t agree with you on 100% of the issues,” said Buttigieg senior advisor Lis Smith in a campaign roundtable hosted by Bloomberg News in Des Moines on Saturday morning. “The idea of electability has to be centered somewhat around who can bring people together, and who can build a big-tent Democratic party in the traditional sense. And I would say that we are the only campaign that is actively aware of that.”

Buttigieg’s pitch to conservatives is based on tone, not policy. “That idea of tone: not everybody votes based on dots on an ideological spectrum,” he tells TIME. “I’m not going to pretend to be conservative, but I am going to make sure that folks see that there might be a place for them in this movement.”

Some of the message is tailored to people who don’t follow politics closely and may be unlikely to have strong feelings about the details of competing proposals. “Folks may not all be policy buffs, but they understand what policies mean to them,” Buttigieg says. “When we talk about what it’s going to take to keep kids safe from gun violence and act on climate, you know, it adds up to a message about how we’re going to be a better country.”

Buttigieg’s biggest challenge so far is his lack of support among voters of color. Buttigieg’s strategy to reach them has changed. He started by unveiling a racial-justice plan, titled the Douglass Plan, which he billed as a “comprehensive and intentional dismantling of racist structures and systems.” He tried to host rallies in South Carolina. None of it worked.

Now, he is focusing instead on lining up intimate conversations in black communities in order to build trust and support. “We’ve certainly made sure to adopt new forms of engagement,” he says, like a recent conversation about racial equity with Charlamagne tha God in South Carolina and smaller conversations about health equity and black-owned small businesses on his swing through the South in December. “I think that’s helpful in terms of building a relationship that’s just different for me, having to do it in a matter of months rather than decades.”

So for Buttigieg, the message is the message. Senator Bernie Sanders is running a campaign based on the idea of a progressive revolution, Senator Elizabeth Warren is running on her policy proposals (with a recent late pivot towards “unity”), and former Vice President Joe Biden is running on electability. For voters who are motivated by ideology or policy plans, Buttigieg probably won’t be their candidate. But for such a cerebral candidate, his pitch to Iowa voters is rooted more in emotion than in passion, in seeking a sense of peace rather than seeking particular policy outcomes.

Buttigieg’s own presidential aspirations hinge on whether Iowans are compelled by his message of “turning the page,” as he puts it. If they don’t, the story of the young gay veteran who came out of nowhere to shoot to the top of the presidential primary may soon be coming to an end. 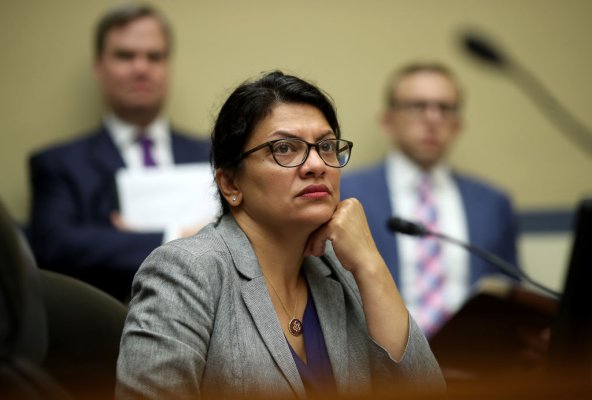 Tlaib Apologizes for Booing Hillary Clinton
Next Up: Editor's Pick