By the time I sat down with Jeff Link in his downtown Des Moines office on Thursday afternoon, I was the sixth reporter he’d spoken to that day. Some days, he says, he receives up to a dozen media requests.

“The reason why I agree to do so many,” he explains, “[is because] I believe it’s critically important that we nominate somebody, not only that can beat Trump and win back some of these rural districts, but help the entire ticket.”

Link, 53, is one of very few experienced Democratic strategists in Iowa this cycle who is unaffiliated with any campaign. That makes him indispensable to political reporters in search of a high-level Democratic perspective on the first-in-the-nation caucuses in Iowa. And that, in turn, means that in the last year and a half, Link’s name has appeared more than 200 times, by his own estimate, in nearly every major news outlet, from the New York Times and the Associated Press, to the Washington Post, the Philadelphia Inquirer and, yes, TIME.

In assuming this unofficial role as Iowa’s Democratic whisperer, Link has amassed outsized influence on one of the most important early states in the 2020 presidential election cycle. As millions of voters try to keep up with the dizzying race, it’s Link’s face and Link’s name—and Link’s ideas—they see again and again.

One of Link’s main messages, amplified in national news outlets, is fairly straightforward: he believes that Democrats needlessly lost to President Donald Trump in 2016 by making fun of Trump and alienating his supporters. “Trump wanted to run as an anti-elitist, even though he lived in a penthouse apartment,” he says, incidentally revealing a pair of red, white, and blue dress socks. “Not only did we let him, but we had a condescending attitude towards rural and working class voters that cost us the White House.”

One way to fix the problem, Link says, is to help Democrats do a better job of wooing rural voters. In 2017, he and former Iowa Lieutenant Governor Patty Judge formed a nonprofit task force, Focus on Rural America, to help campaigns reach beyond the cities. Link estimates they’ve consulted with somewhere around fifteen Democratic campaigns this cycle.

Rural Americans don’t want to witness a cultural fight between Democrats and Republicans, Link says. “They want to access to a doctor. They want an opportunity for a job that pays more than the minimum wage,” he adds. “They want to provide their kids with an opportunity to get a technical degree or some sort of advanced skill or maybe college.”

If the rural voting bloc is Link’s favorite topic, it’s hardly the only one on which he’ll opine. Should Iowa, which is known for its lack of diversity, continue to hold such sway in selecting a presidential nominee? “Iowa’s job is to winnow the field,” he says, without missing a beat. “We started with 24 and and we’re going to be down to five or six. So I think Iowa did its job.”

How has impeachment impacted the three top-tier candidates who have been stuck in Washington for the trial? Being away actually benefitted Amy Klobuchar, Link suggests. On Tuesday night, the Minnesota senator traveled 1,146-miles from D.C. to Council Bluffs, Iowa in a surprise trip just hours after the day’s impeachment duties had wrapped. “If she were not in trial, and had a full day of events and ended up in Council Bluffs, everyone would be like ‘yawn,’” he says with a chuckle. “But it was the news of the day because she made this Herculean effort to get there.”

Link’s experience in Democratic politics goes back nearly three decades. In 1992, he was Bill Clinton’s first Pennsylvania campaign staffer, and eight years later, he helped Democrats win Iowa as the state director for the Gore-Lieberman campaign. By 2008, he was managing consulting teams in 25 states as Barack Obama’s Deputy Director of Paid Media and Research.

But Link’s newfound role as a freewheeling pundit is somewhat new to him, he tells me. “Normally, on a weekend like this, I’d be sitting in a windowless office on conference calls all day,” he says. “And this time I’m on the outside looking in.”

Link looks forward to unwinding with a glass of white wine—now that dry January is over—and keeping up with his routine of going to the YMCA three times per week at 5:30 a.m. But for now, there are two more days before the Iowa caucus and his schedule is packed. In fact, an evening obligation with a local news network during Monday’s caucuses will prevent him from showing up to his own precinct to select a candidate. He’s disappointed to not be counted, he says. But it’s not as if he hasn’t influenced the race. 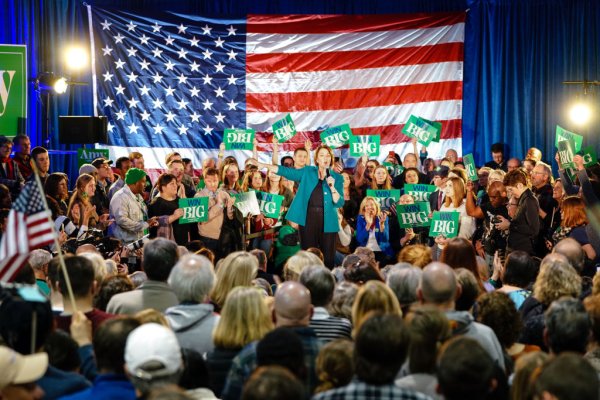 Amy Klobuchar Distances Herself From Her Progressive Rivals, Emphasizes Kitchen Table Issues in Closing Iowa Pitch
Next Up: Editor's Pick