As Democratic Primaries Kick Off, President Trump Launches His Own Show

President Donald Trump speaks at a rally in Des Moines, Iowa on Jan. 30, 2020.
Devin Yalkin for TIME
By Brian Bennett

Donald Trump has never been one to cede the spotlight.

As the hotly contested Democratic primaries kick off in Iowa and New Hampshire over the next two weeks, Trump is pushing himself to center stage in both states. He landed Air Force One in Des Moines, Iowa on Thursday night to speak to an arena packed with supporters and plans to hold a campaign rally in Manchester, New Hampshire, on Feb. 10, the night before the state’s crucial primary vote.

Trump doesn’t need to play for votes at this stage in the election cycle. He doesn’t have a serious challenger in the Republican primaries being held in those states, or in any state, for that matter. And, back in Washington, the Senate may decide shortly whether he should be removed from office for asking Ukraine’s president to investigate the Bidens.

So why is he flinging himself into the middle of the Democratic primaries? His campaign, flush with cash, is calculating they can boost enthusiasm and gas the engine for Trump’s campaign apparatus which will be needed in November. Monday’s vote in Iowa is the first chance Trump supporters anywhere in the country will have to vote to reelect the President to a second term, and Trump’s campaign doesn’t want to let an opportunity slip to test the campaign machinery they’ve built in Iowa and rev up his base in the state.

Iowa went to Trump by 10 points in the 2016 election, the largest margin of victory for a GOP candidate in the state since Ronald Reagan’s 1980 campaign. Trump lost New Hampshire to Hillary Clinton by less than one percent, and Trump’s campaign wants to flip it this time around. “It’s going to be a show of force and a show of organizational prowess,” says Tim Murtaugh, Director of Communications for Trump’s reelection campaign, adding: “We have never been averse to counter-programming.”

Secret Service looks on while supporters arrive; A Trump supporter looks on before the start of the rally
Devin Yalkin for TIME

The push shows that Trump’s campaign is taking a flood-the-zone approach to campaigning and isn’t concerned about spending money and deploying allies, even when there isn’t a clear benefit. It’s also a sign that Trump’s unwilling to let Democratic candidates dominate the headlines, even for a few weeks.

“During this campaign season, the good people of Iowa have had a front-row seat to the lunacy and the madness of the totally sick left,” Trump told a packed 7,000 seat arena at Drake University in Des Moines on Thursday night. He took aim at the leading Democratic candidates including Senators Elizabeth Warren and Bernie Sanders and former Vice President Joe Biden. “Let’s vote for Pocahontas, let’s vote for Bernie, let’s vote for Sleepy Joe,” Trump said. He called former New York City Mayor Michael Bloomberg “Mini Mike,” and mocked South Bend, Indiana mayor Pete Buttigieg’s name: “How about But-Edge-Edge? They call him Mayor Pete. You know why? Nobody can pronounce his name.”

It’s not lost on Trump’s aides that while he spoke in Iowa, the Democratic Presidential candidates who are also Senators — Amy Klobuchar, Sanders and Warren — were stuck in Washington for the question and answer phase of Trump’s impeachment trial and unable to canvass the state during the final week before the caucuses. “It’s a f*ck you to all the Democrats, and he’s going there to mock them,” said a White House official before the rally.

Since the historic impeachment trial started in the Senate last week, the message to White House staff has been clear: get to work. “Everybody inside is over it. It’s on in the background, but everybody’s working,” the official said. As House prosecutors and Trump’s legal team sparred over whether Trump had committed a removable offense, Trump unveiled his pro-Israeli vision for peace with Palestinians. He signed into law his replacement for the North American Free Trade Agreement. In between events, he’s talked over drafts of his State of the Union speech scheduled for Feb. 4, suggesting new guests and adding topics he wants to hit. If the Senate hasn’t completed the trial by Tuesday, the official said, aides are preparing Trump to talk about impeachment during the address, or may postpone the speech to a later date.

Impeachment wasn’t far from Trump’s mind as he touted the signing of the trade agreement on the South Lawn of the White House along with GOP senators on Wednesday. “Maybe I’m being just nice to them because I want their vote,” Trump said as he listed the names of Republican Senators at the signing ceremony. He then gestured toward GOP House lawmakers present, whose caucus voted unanimously against his impeachment on Dec. 18. “Hey, Congressmen, I already got your vote— 196 to nothing. The hell with you,” Trump joked.

Even as Senators sit in judgment over whether he should be removed from office, aides have noted with surprise that Trump hasn’t shown the flashes of anger and frustration they saw in the fall as Democrats moved toward impeaching him or during the drumbeat of bad headlines during Special Counsel Robert Mueller’s investigation into Russia’s effort to help his campaign.

He’s saved that ire for the theater of Twitter. Trump tweeted Thursday morning, before leaving for Michigan and Iowa, that House impeachment manager Rep. Adam Schiff, who spent hours on the Senate floor laying out the Democrats’ case that Trump abused his power, was “mentally deranged.” Schiff, Trump wrote, “is a corrupt pol who only dreams of the Impeachment Hoax.”

Indeed, between signing historic agreements and penning speeches, Trump’s attention hasn’t strayed far from Capitol Hill. As the President hopped to the swing state of Michigan on Thursday to tout his trade policy at an auto parts factory before heading to Des Moines, the televisions on Air Force One were tuned to Fox News’ live coverage from the Senate chamber. 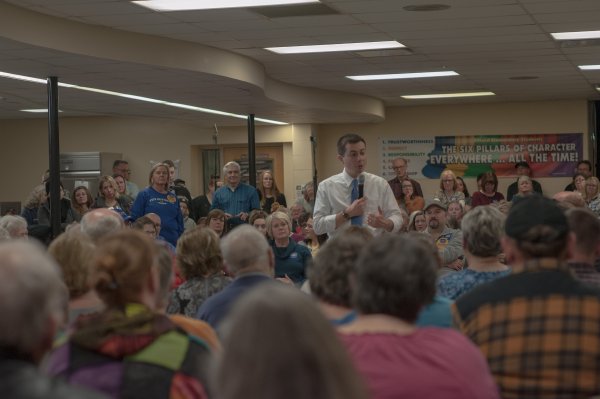 Buttigieg Attacks Sanders and Biden to Make Case for Generational Change
Next Up: Editor's Pick