How the Democratic Party Missed the Power of Bernie Sanders—Again

Bernie Sanders was standing on stage at the US Cellular Center in Cedar Rapids on Saturday night in front of 3,000 cheering supporters waving blue and white signs as Vampire Weekend began riffing behind him. It was, according to Sanders’ campaign, “the largest rally any presidential candidate has held in Iowa this cycle,” and the impressive turnout was backed up by a similarly sweeping ground game: the campaign hit its goal of knocking on 500,000 doors ahead of the first-in-the-nation caucuses on Monday, Sanders told the audience in his speech.

The stadium was not full to capacity and many of the supporters I encountered were from out of state, but the place was unquestionably electric with energy. According to a drumbeat of recent polls, Sanders is one of two candidates to beat. Iowa is anyone’s game as the frontrunners remain locked in a close race, and while it’s unclear what will happen on Monday night, the expectations for Sanders are sky high.

The rest of the Democratic party appears to only just be waking up to this fact— and they’re worried. Very worried. “That should be a four-alarm fire for the entire Democratic party regardless of your exact ideology,” says Jonathan Cowan, the President of Third Way, a center-left think tank that opposes Sanders. “The Democratic party has been asleep at the switch.”

Some Democrats are scrambling to catch up. Former South Bend, Ind., Mayor Pete Buttigieg warned in an email to supporters: “Bernie Sanders could be the nominee of our party.” Third Way sent a memo to approximately 300 prominent Iowa Democrats, exhorting them that supporting Sanders is what “Trump wants you to do.” And a Democratic pro-Israel group started running television ads raising questions about Sanders’ electability and referencing his October heart attack. Some Democratic operatives are reportedly discussing funding an anti-Sanders initiative, should the Vermont senator do well in both Iowa and New Hampshire.

On Sunday, former Secretary of State John Kerry, one of Joe Biden’s most prominent surrogates, was overheard discussing what he would have to do to enter the presidential race in light of “the possibility of Bernie Sanders taking down the Democratic Party — down whole,” according to NBC News. (Kerry subsequently tweeted to confirm he is not running.)

Conversations with top Sanders advisers and supporters as well as Democratic operatives and party officials indicate there’s no clear or single answer to why the Democratic party appears to have again failed to recognize Sanders as a formidable force. In 2016, his grassroots movement blindsided the party elite: propelled by a formidable grassroots base, he only very narrowly lost the Iowa caucus to frontrunner Hillary Clinton. Yet he was somehow never considered capable of pulling off the same feat in 2020.

So how did establishment Democrats manage to miss the Sanders movement—again?

“I think they do tend to underestimate Bernie, I don’t quite understand why,” Jane Sanders, Sanders’ wife and a top campaign adviser and surrogate, told me. “The only explanation I have is that the people they talk to are within the same establishment structure.” The Democratic party, she added, is “very insular”: “They talk to each other, and we believe we’re opening up the system.”

Sanders’ appeal, in part, has to do with his ability to tap into the “righteous anger” a lot of voters feel in this political moment. He’s given people permission to be furious at a system that feels unfair. Time and time again, the people he has reached have been let down by politicians who were supposed to be on their side.

This anger is born in part from frustration with the Obama era, when many progressives felt that very little was accomplished. Barack Obama is beloved, says Grant Woodard, a Des Moines attorney with experience as a Democratic strategist. But many progressive Democrats see it as a flawed period: “They see it as, Wall Street was Wall Street again. No one got blamed. [Wall Street] is doing better than ever. The middle class is getting its neck stepped on more and more.”

Many supporters have told me they are drawn to Sanders specifically because they see him as ideologically uncompromising: what you see is what you get. Sanders would likely still run into roadblocks passing any legislation if Republicans held on to the Senate. But at least, his supporters figure, he wouldn’t drift toward the middle to appeal to Republicans who are unlikely to end up supporting whatever the final policy proposal is.

There’s particular frustration with Obama’s signature legislation, the Affordable Care Act. They believe that Democrats settled for a flawed law, rather than reaching for something bigger. Sanders’ signature policy is Medicare for All.

Another notion about why Sanders’ momentum appears to be growing is the speed-dating theory. The field started with more than 20 shiny new candidates for voters to consider, but eventually they had to choose a favorite. “I think that as people are getting closer, I think that folks, maybe some of his former supporters, may have been looking at other candidates, but some are starting to lock in,” said Troy Price, chair of the Iowa Democratic Party.

A scene from the Bernie Caucus Concert in Cedar Rapids, Iowa.
Devin Yalkin for TIME

Another reason establishment Democrats were perhaps slow to predict Sanders’ rise in 2020 is that this cycle is very different than it was in 2016, when many Democrats appeared to have a binary choice: Sanders or Clinton. “The bet that most Democrats made, including more than two dozen other campaigns, was that Senator Sanders’ resonance was the consequence of folks looking for an alternative to Secretary Clinton,” said Scott Mulhauser, a longtime national Democratic operative.

Until about October, Sanders was not front of mind. He’d been fundraising well and polling with the top tier, but was broadly overshadowed. Buttigieg broke out, Biden was the presumed frontrunner, and Warren was seen as the alternative progressive.

JD Scholten, a Democrat running again against Congress’s most notorious racist in Iowa’s largely rural fourth district (where Sanders is polling well), told me that some Democrats from the “moderate side of the party” reached out to him to discuss the danger to down-ballot candidates like him of a progressive at the top of the Democratic ticket. But the discussions, as Scholten understood them, were about Warren, he says. Sanders, though mentioned, was the afterthought, he said.

“They’re like, we need somebody at the top of the ticket who will help you. I go, literally any of them will help me, and honestly I feel if it’s Warren or Bernie, it might be slightly even better,” said Scholten, who has not yet endorsed a candidate, pointing to his district’s anti-establishment tendency. “People have been assuming he’s going to go away since last summer. And he just hasn’t. And if anything, these rallies that he’s doing are extremely impressive, especially musically. He’s got The Strokes! I want to go to New Hampshire! I feel like he’s personally trying to get me to endorse him by his music.”

Sanders’ heart attack in early October also set back his prospects in many Democrats’ eyes. But he managed to leverage the situation into a comeback, sparked in large part by Rep. Alexandria Ocasio-Cortez’s endorsement, which was timed closely to endorsements from other prominent congressional progressives, including Reps. Ilhan Omar and Rashida Tlaib.

For Ocasio-Cortez, at least part of the reason Sanders was overlooked was because the power of grassroots organizing is underestimated, she told TIME. “For all of the talk that happens on Twitter, or a lot of the discourse that happens in media or on television, oftentimes the story that gets missed is the one that’s right in front of people’s faces, which is the actual door knocking and field organizing that’s going on,” she said, adding that going door to door can transcend some of the resources other campaigns rely on. “I think people really slept on that kind of organizing.”

Sanders still has to answer a lot of questions. Can he grow his base? Can he persuade Democrats who were put off by him in 2016 to throw in their support? Can an Independent who identifies as a democratic socialist really be the Democratic party’s nominee?

Mainstream Democrats must reckon with questions of their own. If Sanders is the nominee, can their party rally behind him? If not, is it too late to stop that train?

“No it is not too late. It’s not even close to too late,” Cowan told me. He believes that for Sanders to be stopped, Democrats have to treat him like a frontrunner and consolidate their support behind one moderate candidate who can defeat him. Then, he thinks, Sanders will lose his advantage. “If you wait until April or May, it will be too late. This is a must-do-now kind of thing.”

The Sanders campaign, meanwhile, is looking forward to the caucuses on Monday night. Winning Iowa would be an extraordinary feat, one that would give him additional momentum moving forward. And one that would cause a reckoning within the Democratic party. 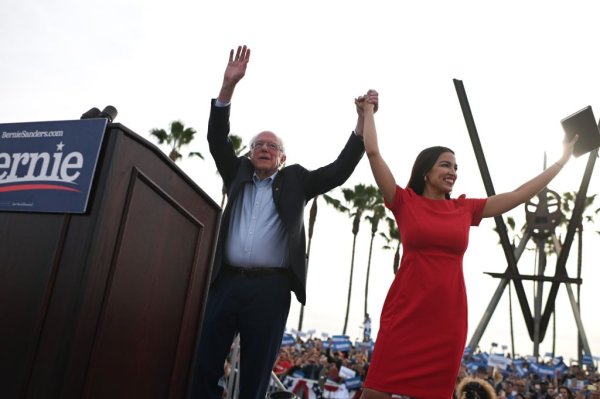 AOC: 'Dangerous' Mistake Not to Embrace Nominee
Next Up: Editor's Pick