In the days and hours before tonight’s caucuses in Iowa, Joe Biden’s campaign appears to be making a nuanced, but strategic, pivot. The former Vice President’s team seems no longer to be running against Donald Trump or the rest of the Democratic field, but against one opponent in particular: Vermont Sen. Bernie Sanders.

Democrats must rally around Biden, his campaign argues repeatedly. It’s the only way to prevent Sanders from securing to the nomination and Trump winning a second term.

“We cannot nominate Bernie. If he’s the nominee, it’s a disaster,” said Rep. Tim Ryan, an Ohio Democrat who endorsed Biden after dropping out of the presidential race himself last year. “Socialism is not popular and would sink us.”

On Sunday, former Secretary of State John Kerry, a top Biden surrogate, reportedly echoed the sentiment in a Des Moines hotel, where he was overheard lamenting “the possibility of Bernie Sanders taking down the Democratic Party — down whole.”

The Biden campaign’s urgent new message comes amidst a flurry of recent polls showing Biden and Sanders in a dead heat, with Senators Elizabeth Warren and Amy Klobuchar and former South Bend, Ind., Mayor Pete Buttigieg, nipping at their heels. If Sanders, along with his progressive agenda, which includes vast spending on new government programs, ends up prevailing, many mainstream Democrats are expected to panic and spend the next several weeks scrambling to build consensus around an alternative. That’s Biden’s in.

“The Pete and Amy people will need somewhere to go,” Ryan told TIME on Sunday evening, and Biden is the obvious choice. Ryan plans to spend his caucus near Council Bluffs pushing voters who support candidates that don’t reach the 15% viability threshold to switch their allegiances to Biden.

Joe Biden takes a photo with supporters at a Town Hall in Des Moines, Iowa on Feb. 2, 2020.
September Dawn Bottoms for TIME

Biden’s fresh campaign pitch seems to resonate among some of the former Vice President’s supporters in Iowa this week. “Medicare for All isn’t free,” said Dianne Miles, who attended Biden’s event in Waukee, Iowa, on Thursday, referencing Sanders’ signature policy proposal. “We can’t go where Bernie wants us to be going. It’s bad policy and bad politics.”

“[Biden] won’t take the country too far left or too far right,” the 73-year-old retired teacher from Des Moines added.

Some Biden backers say they were willing to compromise on specific parts of Biden’s middle-of-the-pack agenda in exchange for winning against Trump.

“Even if I didn’t like everything about him, he’s electable,” said Jewel McDonald, an artist and yoga-studio owner, after seeing Biden on Friday in Mount Pleasant, Iowa. The 69-year-old Fairfield, Iowa, resident has backed Biden since his 2008 run and settled on him as “a uniter.”

“He can bring us together,” she said.

A day later in Waterloo, Iowa, 75-year-old Terry McGrave echoed the pitch, unprompted. “I don’t know who else can beat Trump,” said the retired machinist from Denver, Iowa.

For months, the centerpiece of Biden’s campaign pitch has been his perceived ability to defeat Trump. Biden’s top advocates repeatedly cited polls showing that Biden could win a head-to-head race against Trump, and Biden’s political ads underscored that message: the former Veep is the Democrats’ best shot to oust the President.

While making that case, Biden largely refrained from taking on any of his Democratic rivals head on. The closest Biden came to dinging his opponents was to ask voters if they thought they were telling the truth about the price tag for big ideas like Medicare for All or tuition-free college. Iowans famously demand a measure of civility, known as “Iowa Nice,” from candidates who come through their state.

That tone is expected to change this week as the race shifts toward the first-in-the-nation primary on February 11 in New Hampshire, where voters have a higher threshold for negativity and often goad candidates to criticize Democratic competitors.

First, though, all eyes are on the Iowa caucus tonight. If Biden emerges as the top rival to Sanders in Iowa, his supporters will likely double down on the message that he is the consensus alternative to Sanders’ sweepingly liberal vision. And in that, Biden may find new interest from Democrats who report, in poll after poll, that their top priority is defeating Trump. 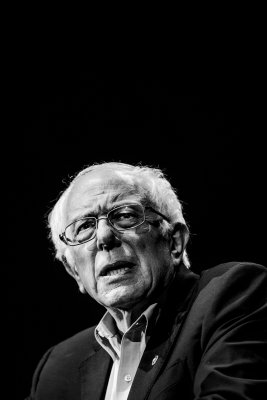 How the Democratic Party Missed the Power of Bernie Sanders—Again
Next Up: Editor's Pick