Supporters of Bernie Sanders and canvassers getting a tutorial at at the Bernie 2020 Des Moines Field Office, Jan. 30, 2020.
Devin Yalkin for TIME
By Lissandra Villa/Waukee, Iowa

We’ve just pulled out of Bernie Sanders’ West Des Moines field office and have barely traveled a block when Amy Jerman, a 54-year-old volunteer from Rochester, N.Y., starts tearing up.

Jerman is a stylish woman wearing a beanie with “Bernie” buttons on it, a Bernie shirt, a kerchief tied around her neck, stacks of silver rings on her fingers and ripped jeans rolled up above her duck boots. She’s normally not emotional, she says, but sometimes she gets overwhelmed by what Sanders and his movement are working toward.

Jerman sits in the passenger seat of a minivan, heading out to canvas for Sanders. She and a friend pulled into Des Moines the previous night after a long drive. (At one point, they started heading east again after pulling in for gas somewhere around Iowa City, and didn’t realize it until they were nearly back in Illinois.) She twists around to talk to Kathleen Graves, 37, another woman from New York who runs a “Babes for Bernie” Instagram account and met them at the field office fresh from the airport.

Jerman and Graves are among the more than 1,700 out-of-state volunteers the campaign estimates have descended on Iowa to help in the final push to the Feb. 3 caucuses. Sanders’ campaign has nearly 10,000 door-knocking shifts scheduled for over the final weekend. (As of a couple of days ago, it says it knocked on more than 400,000 doors in Iowa in January alone.) The campaign’s goal at the outset of January was to hit 500,000, and countless volunteers are showing up to help with that effort and make sure their supporters have a plan for the night of the caucuses. The campaign’s slogan, “Not Me, Us,” alludes to the grassroots movement that it hopes will lift Sanders to victory.

Sanders’ strength on the ground in Iowa is years in the making: he’s more or less been running for President here since 2015. In the crucial final days before the caucuses, the senator has leaned on his supporters to carry the campaign as Sanders sat trapped at his desk on the Senate floor for President Donald Trump’s impeachment trial.

Sanders has relied on congressional allies as well. On Friday, Rep. Ilhan Omar of Minnesota kicked off a canvassing shift at Sanders’ Des Moines field office. Once she and the television cameras left, volunteers lingered. Those with assignments took off to the various neighborhoods they had to hit. First-time volunteers stuck around for a training session, where a Sanders field staffer walked them through how to use the MiniVan app that the campaign uses to gather information.

Volunteers are instructed to rank the voters on their list on a scale of one through five. (One means they’re supporters, three means they’re undecided, and five means they won’t be supporting Sanders.) The volunteers are told to get phone numbers and emails so they can inform voters of any last-minute changes to their caucus location.

Before the volunteers pair off to practice their scripts, someone asks the staffer if he has any tips he can share since he’s done it so much. The staffer, a young, thin man, is loaded with advice. Don’t walk through lawns. Respect the space at the doorway so people don’t feel invaded. Don’t linger too long. No, you’re not loitering. If they threaten to call the police, don’t panic because you’re not doing anything wrong. A three-hour shift equals about 50 doors. Stay away from mailboxes.

Misty Rebik, the campaign’s Iowa state director, says the campaign has committed to having more than one trained precinct captain in every Iowa precinct. The second-to-last weekend before the caucuses yielded 130,000 door-knocks in less than 36 hours, she added.

“At some point, for five consecutive hours, we were knocking two doors every second. I would be very surprised if any other candidate had those same statistics,” Rebik told reporters Tuesday evening. “None of this will matter … if we don’t have the largest turnout on Monday. Our strategy has been risky and such, but you know, in order to beat Donald Trump we have to expand the electorate, and we’ve been willing to take that risk.”

Supporters of Bernie Sanders and canvassers getting a tutorial at at the Bernie 2020 Des Moines Field Office, Jan. 30, 2020.
Devin Yalkin for TIME

Door-knocking in the cold can be slow, frustrating work. For the hour I was with Jerman and Graves as they crisscrossed a neighborhood in Waukee, Iowa, no one answers the door. It’s a Friday during the work day, and the streets are so silent that their voices echoed. At one point while out canvassing, Jerman trips on a chunk of concrete the size of a fist that’s broken off a sidewalk. She turns around, picks it up and pats it back into place. At each house on their list, they leave campaign literature and a sticker Graves designed and ordered.

Then they reach a door on their list with a Pete Buttigieg sign in the yard. They’re torn whether to knock on it at all.

“I’m definitely not opposed to talking to them, but I almost wonder if that puts people off a little?” Jerman wonders. She goes for it, but no one answers. “All I was going to say is that I see you have a Pete sign, just want to make sure you’re planning on caucusing for our democracy.”

We chat as we wind along the street (and around the block into a couple of apartment buildings. One of the doors has a sign taped onto it: “No soliciting!! Campaign people don’t even try!”

I asked Jerman and Graves if either had met Sanders. 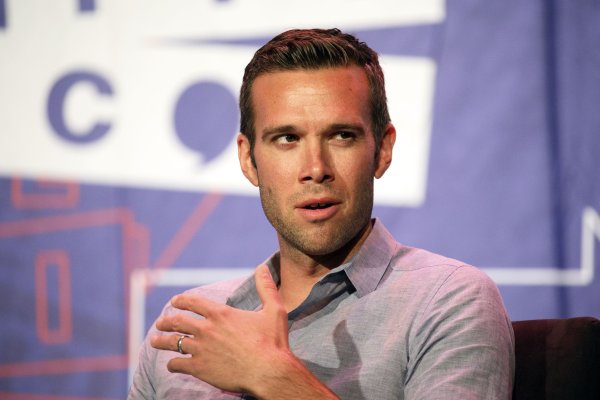 'They Have to Defeat Cynicism.' Jon Favreau on What Democrats Can Learn From Swing Voters
Next Up: Editor's Pick