These Are the Records Broken at the 2018 Oscars

At the 90th Academy Awards on Sunday night, many of the awards were fairly easy to predict, particularly among the acting honors. But there were several unprecedented moments as the golden statuettes were doled out. Many records were broken in the 2018 Oscar nominations themselves, and now that the awards themselves have been distributed, we have ourselves a new crop of record breakers.

Here are some of the most significant records broken at the 2018 Oscars:

When Ivory won the Oscar for Best Adapted Screenplay Sunday night, for Call Me By Your Name, he became the oldest Oscar winner ever. Ivory has been nominated three times before, but this was his first win. In his heartfelt acceptance speech, following a standing ovation, he shouted out his late longtime collaborators, Ismail Merchant and Ruth Prawer Jhabvala.

The Shape of Water, Best Picture

On Sunday night, Guillermo del Toro’s The Shape of Water became the first science fiction film to win top honors at the Academy awards. Though the movie is a blend of genres, including romance and fantasy, its love story between a human and a fish-like river god qualifies it as enough of a sci-fi film — not to mention a genre movie and a monster film — to establish a new record.

A Fantastic Woman not only stands out for its rare narrative that centers on the life of a transgender woman. The movie also became the first Chilean film to win an Oscar for Foreign Language Film Sunday night.

Williams, who was nominated for Best Original Score for Star Wars: The Last Jedi, broke his own record Sunday night — by losing to The Shape of Water‘s Alexandre Desplat. The veteran film composer, who has won five Oscars, is the most nominated living person, which means he also holds the title for most Oscars lost, adding one to the list for a grand total of 46. 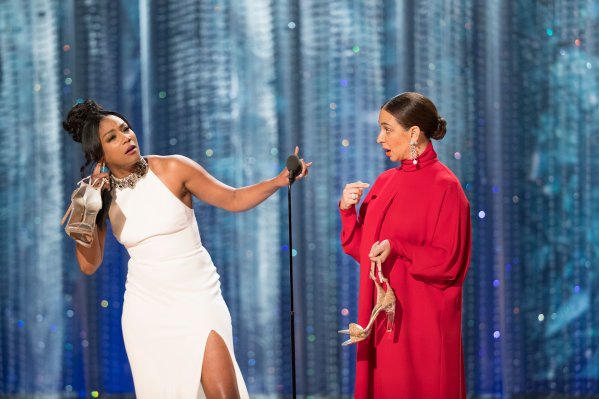 The Best, Worst and Most Surprising Moments of the Oscars
Next Up: Editor's Pick