Forget Game of Thrones. Orange Is the New Black Is the Most Important TV Show of the Decade

“Prison is just not as romantic as all those ’70s exploitation movies made it out to be,” Nicky Nichols, an inmate played by Natasha Lyonne, says to Alex Vause (Laura Prepon) in the emotional seventh and final season of Orange Is the New Black. “I want my money back.”

The joke works on multiple levels: Nicky and Alex are lesbians. They’re also privileged white women who couldn’t have foreseen what awaited them when they reported to Litchfield Penitentiary, the fictional upstate New York minimum-security prison where the show’s first five seasons take place. But the quip is also a winking commentary on the expectations viewers have been projecting on the Netflix dramedy even since before its July 2013 premiere. Created by Jenji Kohan, the maverick writer-producer behind Showtime’s Weeds, and based on Piper Kerman’s memoir of the same cumbersome name, Orange sounded, at first, like a pulpy look at women in prison as seen through the audience-friendly eyes of a pretty bisexual WASP from gentrified Brooklyn (Taylor Schilling).

In fact, as fans—105 million of them, according to Netflix—who’ve made it both the most-watched original series and the best-loved show in the service’s library are well aware, Orange was always a more ambitious project than that. Kohan famously conceived Schilling’s heavily fictionalized Piper Chapman as a Trojan horse for smuggling in dozens of women Hollywood historically ignored—poor women, black women, brown women, trans women, immigrant women, elderly women, mentally ill women, women with double-digit dress sizes.

When HBO and Showtime failed to open their gates, she took the horse to Netflix. Kohan’s timing was perfect: New to developing original programming, the service granted her a lot of leeway. Brought to bear on her expansive vision at a critical moment in the rise of streaming, that freedom yielded a series that smoothed the transition from cable’s 2000s golden age to the vibrant and diverse, if fragmented, era that’s come to be known as Peak TV. More than a bold experiment in representational sleight of hand, Orange became the most influential show of the decade.

Six years may not seem like a long time in the history of TV. Friends ran for a decade; The Simpsons is about to turn 30. But it would be hard to underestimate how much has changed on the small screen since 2013. Netflix launched its first high-profile original, House of Cards, that February. Hulu and Amazon were also dipping toes into the original-­content pool, though the latter was essentially crowdsourcing and neither had produced a signature series. (Amazon’s Transparent arrived in 2014. Hulu lacked a big hit until The Handmaid’s Tale premiered in April 2017.)

As such, the phrase “binge watching” was just starting to gain currency when the first season of Orange—all 13 hours of it—showed up on Netflix. Viewers who now regularly consume a full season’s worth of a given series within 24 hours still weren’t sure that they could get used to this new form of couch potato–dom. Kohan’s show played no small part in converting skeptics. I remember marathoning the season in a weekend, spurred on by my impatience to know everyone in Orange’s tremendous cast of characters. For better or worse, bingeing is now so common that a term for watching one episode of TV at a time would be more useful.

Despite a consensus that we were living through a small-screen renaissance, casts were still depressingly homogeneous in 2013. Shonda Rhimes’ shows were exceptions that proved the rule: When it debuted the previous year, Scandal became the first network drama with a black female lead since the 1970s. With an Outstanding Drama short list consisting of Mad Men, Game of Thrones, Downton Abbey, Homeland, House of Cards and winner Breaking Bad, the 2013 Emmy Awards were glutted with nominees that both starred and catered to white people, most of them straight and affluent.

Laverne Cox on the cover of TIME, 2014
Photograph by Peter Hapak for TIME

Orange broke that mold in just about every conceivable way. When it came to representation, this wasn’t merely the first prestige show since The Wire built around poor and nonwhite people—or the rare program intended for a general audience that featured more than a token queer regular. It also endowed each of these characters with stereotype-­defying specificity. In 2014, when this magazine declared that America had reached a “transgender tipping point,” Laverne Cox’s breakthrough role as trans inmate Sophia Burset made her the face of that moment. For once, women whom mainstream society habitually ignored were being represented in pop culture as individuals with virtues and flaws, rather than as a monolithic mass of degenerates or vixens.

The show’s mix of gallows humor and high tragedy disrupted genre categories to the extent that the Emmys moved it from comedy to drama between Seasons 1 and 2. And over the years, its unflinching depiction of the American justice system has both mirrored and catalyzed intensifying debates around mass incarceration, private prisons, systemic racism, economic inequality and police violence against people of color. Some of these story lines have been controversial: Kohan got blowback for having a guard kill Samira Wiley’s bighearted Poussey Washington at the end of Season 4. Maybe the point was that even Litchfield’s gentlest inmate could be a casualty of police brutality, but many fans just saw another black body sacrificed in service of a plot twist. Still, the conversations that have come out of Orange’s perceived missteps have felt as vital as the ones around its successes.

If the show no longer generates as much attention as it enjoyed in its first two or three seasons, it’s likely because TV was so quick to absorb its innovations. The past five years have been defined by both a spike in scripted programming—­one driven by the Netflix content factory Orange helped build—and a related boom in shows that represent marginalized communities. Now series as different as Donald Glover’s virtuosic Atlanta and the hit network comedy Fresh Off the Boat, going into its sixth season, center characters of color. GLOW, a lighter dramedy about lady wrestlers from executive producer Kohan, features another big, diverse cast of women. Before Jeffrey Tambor’s #MeToo problem, Transparent followed Kohan’s lead in honoring every letter of LGBTQ; Pose revolves almost entirely around low-income queer and trans people of color. Nonbinary actor Asia Kate Dillon had a role on Orange before making history as a nonbinary character on Billions.

Orange has served as a veritable binder full of talented women of all identities. Wiley now stars on The Handmaid’s Tale. Uzo Aduba, who won two Emmys for her deeply humane portrayal of mentally ill inmate Suzanne Warren, will play Shirley Chisholm in an FX drama about the Equal Rights Amendment. Dascha Polanco, Orange’s Daya Diaz, shined in DuVernay’s When They See Us and will appear in a film adaptation of Lin-Manuel Miranda’s In the Heights. Danielle Brooks’ powerful performance as Poussey’s best friend Taystee Jefferson led to a Tony-nominated run in The Color Purple. After Orange reinvigorated Lyonne’s career, she co-created and starred in her own idiosyncratic Netflix dramedy, Russian Doll. It’s one of the year’s best new shows.

While Game of Thrones’ disappointing final season generated more fanfare, it also felt like a requiem for a kind of series—epic, expensive, built to dominate the cultural conversation—that the quirkier, more fragmented and politicized streaming era can’t sustain. From HBO’s Westworld to MTV’s short-lived Shannara Chronicles, no attempt to produce the next Thrones has drawn nearly as many viewers; its most likely successor, Amazon’s Lord of the Rings prequel, isn’t expected to premiere until 2021. By Netflix’s own metrics, even Stranger Things has failed to generate as much interest as Orange—and there was never anything especially revolutionary about the former show anyway. One of my favorite dramas of the 2010s, Mad Men, represented the fullest realization of the previous decade’s white-male-antihero-heavy golden age more than a new paradigm for TV. Another, Twin Peaks: The Return, is simply too singular to replicate.

Orange is the most important show of the decade in part because it wears its import so lightly. Though the moment when it felt truly audacious has passed, it just keeps experimenting. Devoted entirely to a three-day inmate uprising, Season 5 was as exhilarating as it was exhausting. More past-their-prime shows should jump the shark with such wild abandon.

In its uneven but mostly satisfying final season, on Netflix July 26, Orange applies its fluid attentions to immigration, in yet another unprecedented, if rushed, story line. A bit too much time is devoted to a newly paroled Piper’s relationship with Alex, who is now her wife, and rough transition back into bourgeois-bohemian New York City life. Yet elsewhere, beloved characters get endings that feel right even when they’re crushing—ones that don’t reflect justice so much as the harsh calculus of privilege, savvy, drive, luck and social support that governs outcomes for incarcerated people.

But my favorite plot imagines how prison might look under progressive leadership, with classes in restorative justice and an end to solitary confinement. While these reforms can’t put an end to the problem of mass incarceration, they’re a step in the direction of affording inmates the human dignity that the show insists they deserve. Like Orange Is the New Black itself, the new Litchfield Max isn’t perfect—but its innovations pose a radical threat to the status quo. 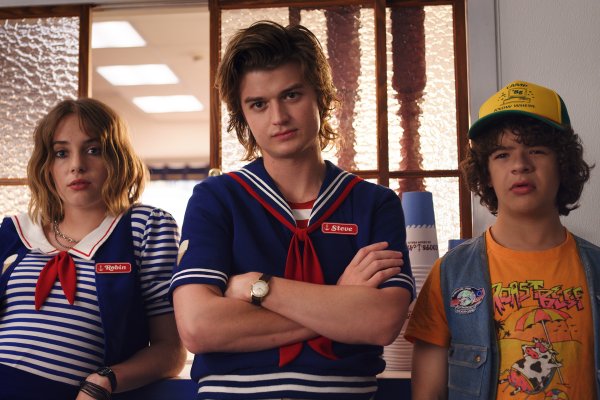 This Celebrity Friendship Makes So Much Sense When You Realize It's Stranger Things Season 3 Come to Life
Next Up: Editor's Pick