In Transparent, an Arresting Development

To play Pfefferman, Tambor says he had to learn how to be a woman—just like his character
Amazon Studios
By James Poniewozik

One day out of the blue, Mort Pfefferman invites the three grown Pfefferman children to dinner to break some news to them. Their minds start racing. Maybe Mort is getting remarried or selling their family home in Los Angeles, or maybe it’s cancer–it must be cancer. Maybe Mort is dying.

Mort (played by Arrested Development star Jeffrey Tambor) is not dying. But Mort is, in a way, being reborn. The news is that Mort is now Maura: he–she–is transgender, has begun attending a trans support group and is in the process of transitioning to life as a woman. If her kids are about to lose their father, they are about to gain a mother.

Transparent’s wry title–pause after the first syllable–gives you a sense of the different levels this half-hour dramedy is working on. Yes, it’s about a parent’s gender transition. But it’s also about seeking transparency–about Maura trying to find out if she can be who she truly is with her family. (Maura, it turns out, can’t work up the nerve to come out over dinner.)

At the same time, it’s about transparency as something you struggle with or against. Each of the Pfefferman kids, we find as the pilot unfolds, maintains a kind of front they’d rather the outside world did not see through. Sarah (Amy Landecker) is an affluent, minivan-driving stay-at-home mom trying to camouflage a restlessness that breaks the surface when she runs into a former lover at her kids’ school. Josh (Jay Duplass) is a music producer with bohemian pretensions–he works with a twee folk band that includes a very earnest triangle player–but a hungry materialist streak. (His reaction when he hears the family home might get sold: “I’ve been Zillowing the f-ck out of this place!”)

Finally, Ali (Gaby Hoffman) is aimless, constantly broke and bouncing between half-conceived ambitions (the latest: to write a “sort of Urban Outfitters checkout-line kind of book”). When Maura tells her they share “the depressive gene,” though, she denies being depressed. “Boy,” Maura answers sincerely, “it is so hard when someone sees something you do not want them to see.”

It’s the best pilot of the fall TV season, the sort of rich, funny-but-melancholy character study you’d expect to see on HBO (think Six Feet Under, on which creator-writer Jill Soloway was a producer) or Showtime (think United States of Tara, which Soloway co-produced). But you won’t find it on a TV network. All 10 episodes of Transparent’s first season will premiere Sept. 26 on Amazon Prime Video. (The original pilot, parts of which are being reshot, is available to stream now.)

This was not the plan. Soloway began pitching the show after she won the Directing Award for Drama at Sundance for her 2013 movie Afternoon Delight, about a Los Angeles stay-at-home mother (Kathryn Hahn) in a midlife crisis who befriends a stripper. “My dream was that HBO would say, ‘We love it, we’ll shoot it right now,'” she says. Instead, the network and other “usual suspects” were interested, but only in beginning a development process that might take years and go nowhere.

Amazon, on the other hand, was ready to make the show, and fast. The bookseller-cum-superstore-cum-media empire is gearing up to compete with Netflix, which last year mainstreamed original streaming TV with House of Cards, Arrested Development and Orange Is the New Black. Amazon also launched a few shows last year, including Garry Trudeau’s political satire Alpha House, but none became a popular or critical phenomenon.

So Amazon upped its creative ambitions for its second wave of series, which includes not only Transparent but shows from names including Chris Carter (The X-Files) and Paul Weitz (About a Boy), debuting later in the season. A third batch of pilots, from the likes of Steven Soderbergh and Whit Stillman, goes online Aug. 28 for sampling and voting. (Amazon takes viewer ratings into account when deciding to pick up pilots, though the votes are not binding.) And it cracked open Jeff Bezos’ wallet, spending $100 million on original programming in the third quarter of this year alone.

The result is a lineup of new shows as varied and lushly produced as any fall network schedule, coming in a year that feels like a watershed for non-TV TV. Beyond Amazon and Netflix, Yahoo TV will produce the sixth season of Community, after the cult comedy was canceled by NBC. In December, Sony will launch the superhero drama Powers–once a much anticipated project developed for FX–on its PlayStation Plus video-game service.

Why? Unlike traditional TV, which exists to sell ads, streaming can have many motives and payoffs. Netflix, like HBO, wants to sell subscriptions. Yahoo wants to raise its media profile. (Hence it also hired Katie Couric as an anchor.) Sony wants you not to buy an Xbox. And Amazon wants to give you one more reason to pay $99 a year for a Prime membership, along with Kindle premiums and free shipping on patio furniture. (Hey, if it can invest in drones, why not dramedy?)

All of which offers the same kind of opportunity for a new platform to expand the possibilities of series TV, the way HBO did with Sex and the City and The Sopranos. For Soloway–following in the tradition of Lena Dunham, who went from directing SXSW cult hit Tiny Furniture to making the HBO phenom Girls–it means the chance to tell the kind of stories indie film does, but with money and distribution. “It’s a rare movie about humans or families that can make it theatrically,” she says. Even at Sundance, “there’s a real understanding as a filmmaker now that your biggest audience is going to come from iTunes or Netflix.”

In Transparent, Soloway revisits the highly specific milieu she did in Afternoon Delight: affluent Jewish family life in L.A., right down to the pressures of fundraising for private school. (One mom tells Landecker’s character, “If you don’t raise five grand for Tu B’Shevat, Dana Goodman just implodes.”) And the show trades in the kind of low-key, mid-to-three-quarter-life-crisis stories that have been driven out of theaters by Transformers-style explosions.

But the hook is Maura’s story, especially since–with figures from Laverne Cox to Chelsea Manning–transgender identity is more visible than ever. Soloway had Tambor in mind for the part from the beginning: “There’s always been something about Jeffrey not only as an actor but as a person–his ability to embody a very dignified, feminine way of being.”

Still, casting a star in the role who is cisgender–that is, who identifies as the gender associated with the sex he was born with–could be touchy in an era when Cox plays a trans character in Orange Is the New Black. To help capture the experience accurately, Soloway hired Zackary Drucker and Rhys Ernst, trans filmmakers and artists, as consultants. The supporting cast includes Alexandra Billings, who was the first trans woman to play a transgender character on TV, and trans comedian Ian Harvie.

“I had everything to learn,” Tambor says of his preparation. “I remember my first costume fitting. They asked, ‘What do you like?’ I thought, I have no idea what I like.” But he found that the process of becoming Maura was, after all, what the character goes through. Though in her 70s, “Maura is new,” he says. “All the mistakes Jeffrey was making, Maura had to make too.” Mistakes or no, Tambor is marvelous, capturing Maura’s warmth and grace, her anxiousness to be accepted by her children and see them thrive–an experience of parenting that goes beyond any gender identity.

As for Maura’s own identity, Soloway says, Transparent’s first season will explore–in the present and through flashbacks–exactly how far along Maura is in her process. “We’re asking that to ourselves,” Soloway says. “When does Mort become Maura? Is Mort changing into Maura? Is Maura allowing herself to be seen and pushing aside the character or costume of Mort?”

It’s a complicated question, and the opening of the series handles it with nuance and heart. Transparent has the beginnings of a transformative, transcendent, transporting story of a person, a family–and a culture–going through a transformation. 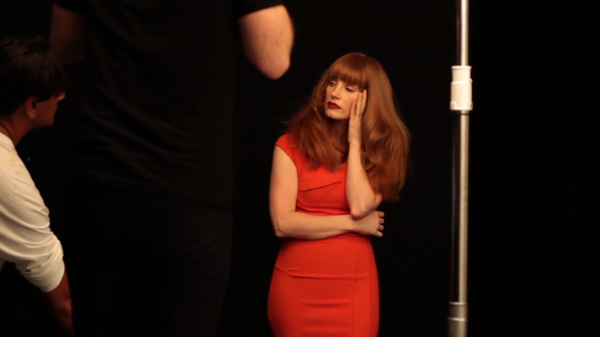 Go Behind the Scenes of Jessica Chastain's TIME Photo Shoot
Next Up: Editor's Pick