The Russian toy known in its homeland as the matryoshka—traditionally a series of round, rosy-cheeked wooden women nested inside one another—lends itself to elaborate metaphors. Each smiling doll looks complete until you twist it open to reveal the hollowness inside; only the peanut of a baby girl at its core turns out to be solid. Maybe those layers represent generations of mothers birthing daughters in their own image. Maybe they’re the armor a woman deploys as she stumbles through her adult life feeling no more mature than she was as a kid.

Both interpretations (and more) prove relevant to Russian Doll, 2019’s best new show to date, a cerebral yet propulsive eight-episode dramedy that hits Netflix on Feb. 1. Created by the dream team of Natasha Lyonne, Amy Poehler and Bachelorette filmmaker Leslye Headland, it frames Lyonne’s antihero Nadia as a variation on the kind of character she’s often portrayed both onscreen and in real life: a prickly, cynical, self-destructive New Yorker with a Marge-Simpson-on-two-packs-a-day voice. (In a story where the smallest details are freighted with meaning, the resemblance between Lyonne’s real, Russian-derived first name and “Nadia” can’t be an accident.) She’s turning 36, and the premiere opens with Nadia staring blankly into the bathroom mirror at a party her artsy friends Maxine (Greta Lee) and Lizzy (Rebecca Henderson) are throwing for her.

But something about this birthday is haunting her. Instead of enjoying a night surrounded by people who care about her, Nadia bails early to hook up with a smarmy stranger (Jeremy Bobb). Hours later—but only nine minutes into the first episode—she spots her missing cat, darts out into the street, gets mowed down by a cab… and finds herself back in her friends’ bathroom at the beginning of the evening, terrified but physically unscathed. Subsequent resurrections, all of which start in that same room, scored by Harry Nilsson’s deceptively jaunty “Gotta Get Up,” establish the central mystery: What the hell is happening to Nadia? Did she die? Was the joint Maxine shared with her laced with something (besides cocaine)? Is she just losing her mind?

If the show itself were a matryoshka, an atmosphere of vintage downtown cool would make up its outermost layer. At 39, Lyonne may be the youngest famous avatar for this world; appearances by Chloë Sevigny, the actress and playwright Jocelyn Bioh and Lyonne’s pal experimental musician Lizzi Bougatsos add to that cultural cachet. (Though Lyonne is the highlight, a supporting cast that includes Dascha Polanco, Charlie Barnett and particularly Elizabeth Ashley gives her plenty of lively foils.) Cultural references tend toward the highbrow. Sex and drugs are just part of the backdrop. And though it’s set mostly in the present, the nighttime East Village of Russian Doll—with its 24-hour diners, homeless artists and dark bars with secret back rooms—conjures the neighborhood’s 20th-century grit.

The second layer of the doll is the show’s Groundhog Day plot architecture. A puzzle box that might draw comparisons to Netflix’s recent interactive sensation Black Mirror: Bandersnatch, the story is stuffed with clues for viewers eager to try untangling Nadia’s predicament on their own. Yet when it comes to how they use their characters, the shows couldn’t be more different. In Bandersnatch, the hero is an endlessly mutable cypher; for Russian Doll, Nadia’s specificity is paramount. Her arc feels like the ideal fusion of Lyonne’s gruff authenticity, Headland’s acerbic humor and the warm, humanistic perspective that defines Poehler’s work.

At its heart—the solid center of its matryoshka structure—Russian Doll uses Nadia’s trajectory to pose questions that are spiritual rather than narrative. Though it seems purposeful that she’s a software designer who’s worked in video games, her rebirths evoke spins around the karmic wheel more than hard resets. The show isn’t interested in how she keeps reliving the same night so much as in the knowledge she gains about herself, her past and her relationships in the process. What is a Russian doll, after all, if not an invitation to delve beneath the surface? 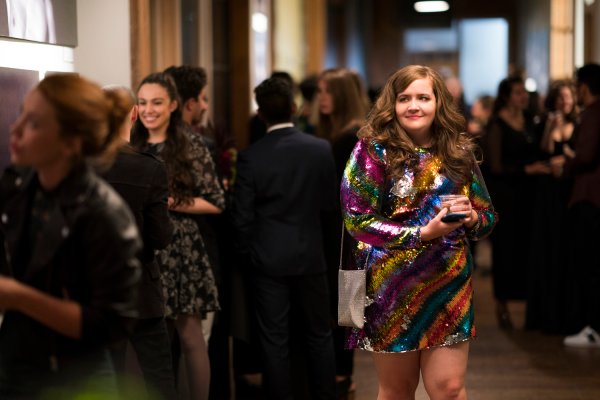 12 Exciting TV Shows Created by Women Premiering in 2019
Next Up: Editor's Pick