It would be easy to frame Hulu’s new drama series The Handmaid’s Tale as a beneficiary of extraordinarily good timing. Its source material, Margaret Atwood’s 1985 novel, is one of two modern classics to receive a sudden and sustained boost in discussion in the months since President Trump’s election. (The other, George Orwell’s 1984, is being adapted for Broadway, where it will debut this summer.) Handmaid’s themes — the cruelty and illiberal thinking of organized religion, the ease by which open democracies slip into authoritarianism as a result of misogyny — may well find an eager new audience in this country.

That would be giving The Handmaid’s Tale too little credit, though. First, the themes drawn out in Hulu’s masterful adaptation did not suddenly become relevant after the election. The climate American finds itself in now, with echoes of disregard for women, did not come about overnight. Whatever forces led us to the point where The Handmaid’s Tale is a once again widely read and shared novel have always been at work. And second, as a show, The Handmaid’s Tale is as crisply and elegantly made as anything I’ve seen on TV this year. It manages to bring a dystopian story to life in a way that works as episodic TV, sapping none of the book’s power. This is a show that could work anytime and one that will likely be watched and discussed for years to come.

Elisabeth Moss plays Offred, the “handmaid” through whose eyes we see Gilead. Formerly a happy cog in the world of book publishing, Moss’s character lived a pleasant middle-class life in urban America. We see in flashback that the first shocks of seismic societal change hit her as odd bits of turbulence. They increased in intensity bit by bit—causing panic far too late. Moss, who acted through a decade’s worth of progress on Mad Men, never telegraphs the future that we know is coming for her. She’s a genius of confusion, rather than outright horror. After all, what ends up happening to her, and to America, in Handmaid’s is only plausible once it’s happened.

Moss’ skill at playing an unsuspecting, free modern woman in flashback only emphasizes the tragedy of the show’s main story. One of the few women able to give birth, she’s forced into sexual slavery in the home of a government official. (She’s “Offred” because she’s “of Fred,” as in belonging to her new master, Fred.) Her life in the new Republic of Gilead forces her to constantly on guard. She takes great care, for instance, not to run afoul of the “Eyes,” a secret-police organization waiting to punish any sinner. She continually chokes back the emotion roiling just below her surface. She’s trying to stay alive.

Every detail of The Handmaid’s Tale, from the distinctive costuming of the maids — massive hoods that shield their faces, making engagement with the world limited — to the supporting performances, hits exactly the right note. Aside from Moss, who is instantly a very real contender for the Emmy that eluded her on Mad Men, standouts include Samira Wiley (Orange is the New Black) as Moira, a friend to Moss’s character who faces the added hazard of being not just a woman but a gay woman. Predictably great is Ann Dowd, whose menacing Aunt Lydia educates the women in the ways they’re supposed to go along and get along in this society. Her command: Give themselves up to violence as catharsis, and turn off their brains otherwise. Lydia’s status as both woman and abuser of women makes a scarily sharp point about human beings’ ability to go against their better angels.

There’s little hope in The Handmaid’s Tale, but there is this: The show depicts a world in which women come to one another’s aid as often as they miseducate, abuse, and inform on each other. Moss’s character endures cruel treatment at the hands of her master’s wife, the infertile Serena Joy (Yvonne Strahovski). But she also forms bonds, as with fellow handmaid Ofglen (Alexis Bledel). The pair’s conversations, as they do the shopping for their respective households, are a way of maintaining their humanity.

It’s worth wondering how this show will adapt a novel with a finite structure over the course of multiple seasons. I trust the creative team behind this project, including producer Margaret Atwood, to make use of the potential of television. They have already done it.The book is masterful at casting its spell, methodically building a fallen world and convincing you it might exist. The show, by contrast, plunges you into chaos immediately and forces you to keep up.

At its best, it has a tension practically unmatched on television. The more you learn about Offred, the more she looks like TV’s great new heroine. 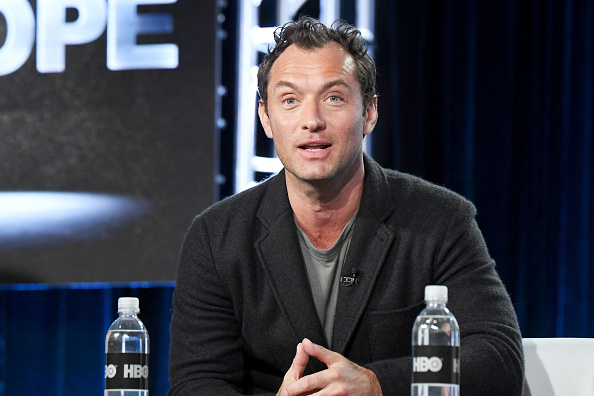 The Internet Is Totally Here for Jude Law Playing Dumbledore in Fantastic Beasts
Next Up: Editor's Pick