Orange is the New Black Made TV—and Me—Gay

In 2013, my need to binge the first season of Orange is the New Black felt so urgent that I couldn’t wait for WiFi to be installed in my new apartment to watch it on TV—so I streamed it on my phone. At the time, I thought I was straight. But upon meeting the show’s central couple, Alex Vause (Laura Prepon) and Piper Chapman (Taylor Schilling), everything changed for me.

The seventh and final season of Orange is the New Black drops July 26 on Netflix, and in the six years since showrunner Jenji Kohan’s first post-Weeds venture debuted, I’ve come out to my friends and family, and I now make a living writing about queer pop culture. Looking back, I’m struck by the memory of 21-year-old me, scared and alone, wondering why Alex and Piper sent simultaneously pleasurable and earth-shattering sensations rippling through my body, and the stark contrast of where I am now: on my couch in a furnished apartment, watching the final episodes with my girlfriend.

The show changed the course of my life, and it did for other queer women, too. Lauren Morelli, a former Orange is the New Black writer and co-executive producer, wrote an op-ed in 2014 detailing her coming-out journey, titled “While Writing for Orange is the New Black, I Realized I Was Gay.” Today, Morelli is married to former Orange cast member Samira Wiley, and is the showrunner of Netflix’s reboot of the seminal queer series Tales of the City.

But while Orange was transforming our lives, it was also ushering in a queer revolution on TV.

Orange’s greatest legacy is that it influenced networks to mainstream marginalized narratives, because it proved that queer, diverse stories can be beloved, award-winning shows. It wasn’t the first series to depict queer female relationships—we have Buffy The Vampire Slayer, Glee and The L Word to thank for that. Pretty Little Liars, Grey’s Anatomy, and Degrassi also featured queer female characters; any secondary or tertiary characters, however, tended to just romantically orbit a sole lesbian character among a group of straight friends.

But as Netflix’s flagship original comedy-drama series—which the streaming service says is its most-watched original series ever, reporting that in the neighborhood of 105 million users have watched one episode or more—the show opened doors for new kinds of queer stories to be told. It opened the door for diverse ones—like the one in which Wiley’s Poussey has a crush on her best friend, Danielle Brooks’ Taystee. And it opened the door for complicated ones—as with Suzanne (Uzo Aduba) and Maureen (Emily Althaus), who both deal with mental illness. It also created unexpected icons like Laverne Cox, an out transgender woman of color, who not only found an unprecedented spotlight herself (she appeared on the cover of TIME and was Cosmopolitan’s first trans cover star), but also trained the spotlight on the unique issues faced by incarcerated trans women.

Queer visibility looks vastly different today than it did six years ago. Most notably, in the intervening years, gay marriage was legalized. Major female celebrities including Ellen Page, Miley Cyrus and Demi Lovato came out as queer. Arguably the most celebrated athlete in the U.S. right now is out lesbian soccer player Megan Rapinoe. And GLAAD reported that positive portrayals of queer people on TV are at an all-time high. We’re not living in the same world as the one into which Orange Is the New Black was released. But did the series itself shift the cultural landscape, or did it merely benefit from serendipitous timing?

It’s hard to say for certain, but here’s what we do know: Before Orange, queer female protagonists on TV were few and far between, and rarely (setting aside the The L-Word) were there numerous woman-loving-woman leads on a show. Orange is the New Black allowed for queer women of color to be included in prestige television, both on-screen and behind the camera, rather than being restricted to frothier fare like Glee or the aforementioned L Word (though both certainly had their merits).

The show became the first series to be nominated in both the Best Drama and Best Comedy categories at the 2015 Emmys, a testament to the genre-bucking nuance with which its characters’ arcs were rendered. The actors whose careers it helped launched have won accolades—Aduba won multiple Emmys and Cox has been nominated three times—and used their platforms to speak out on LGBTQ rights and immigration, among other social issues. And by featuring the sheer number of queer characters it did, Orange lifted the burden of tokenism, including not, as many other shows have done, one queer character meant to stand in for the whole, but a wide range of identities that better reflects the world we live in.

Netflix took a leap of faith on Kohan’s diverse sisterhood of queer felons, and whether the show was a pioneering trendsetter or an early bandwagoner on the cusp of the queer TV revolution ultimately doesn’t much matter. Its success allowed for dozens of other queer-led shows to be greenlighted—on Netflix and elsewhere. Consider that, this week, numerous queer-led shows were nominated for multiple Emmys, including Pose, Schitt’s Creek, Killing Eve and Fleabag (all of which air on different networks). Comparatively, in Orange is the New Black’s first Emmy race in 2014, the only other nominated series to center queer characters were Girls and Modern Family, and their queer leads were white men.

These days, Orange Is the New Black doesn’t draw quite the raves it once received from critics. And it appears to have slipped in popularity since its groundbreaking early days. But in its final season, the show shines doing what it’s always done best: highlighting social injustice, this time the cruelty of immigration detention centers and the labyrinthine process detainees must navigate to escape deportation.

The final season also follows former inmates Piper and Cindy (Adrienne C. Moore) as they grapple with their release, while others, like Aleida (Elizabeth Rodriguez), struggle with recidivism. If season seven is about moving on—Piper leaving prison life behind, Cindy mending a family schism, Taystee overcoming depression and finding new hope for her case—then I must leave the old me behind too, that frightened, lonely, closet-case that shattered while streaming season one. But there’s a difference between getting over things and pushing forward. If Orange is the New Black has a final message, it is this: Moving on is hard. Our wounds still fester. But those wounds are a part of us, and if we don’t accept our whole selves, we risk never moving forward. 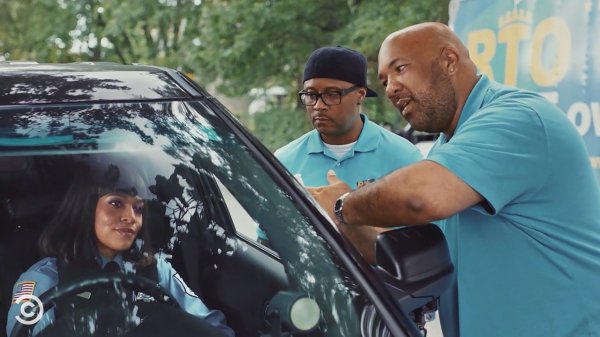 This Late-Night Comedy Duo Created Two of the Summer's Funniest New Shows
Next Up: Editor's Pick