In the first episode of Pose, the newest series from superproducer Ryan Murphy, a young black man, Damon (Ryan Jamaal Swain), is kicked out of his home after his parents discover gay pornography in his bedroom. Suddenly homeless, Damon makes a run for New York City, where he falls in with a group of gay and transgender people who have forged a tight-knit community. They’re all looking for something universal, something that they find in one another: a family.

In the 1980s, while much of America was practicing the kind of “family values” espoused by conservative leaders like Ronald Reagan and Jerry Falwell, the counterculture was creating a very different kind of family–one not bonded by blood. That’s what’s at the heart of Pose, which follows a group of black queer Americans who have all, in one way or another, had to find a new community after losing their own, often by getting kicked out or disowned for their sexuality or gender expression. The show shines a light on a real but largely undocumented chapter in this country’s history when young gay and transgender people of color fled to New York City to make new lives. Featuring the largest-ever cast of transgender actors, Pose applies classical narrative storytelling to nontraditional subject matter that was always considered too niche to carry its own production. You’ve never seen anything like it on television before.

In recent years, prestige TV has highlighted transgender characters in contemporary society, brought to life by both trans performers, like Laverne Cox’s Sophia on Orange Is the New Black, as well as cisgender ones, like Jeffrey Tambor’s Maura on Transparent. But Pose, created by Murphy and Steven Canals, shows the larger culture of the queer underground of the ’80s, when trans people banded together in tight-knit groups they called “houses”–a term borrowed from the world of fashion. Each house was led by a “mother,” or a transgender woman who took other young gay and trans people without families under her wing. Pose brings this to life as Blanca Evangelista (MJ Rodriguez) splits off from her domineering and imperious mother, Elektra Abundance (Dominique Jackson), to form her own house. Quickly, Blanca adopts Damon as well as Angel (Indya Moore), a sex worker caught in a romance with Stan (Evan Peters), a straitlaced Wall Street type. (In a wink to both the audience and the decadence of the era, Stan works at Trump Tower.)

Stepping into her own right as a mother, Blanca sets some rules: if you’re going to be an Evangelista, you’re not going to use drugs and you’re going to get an education. It’s just like any family in which mothers can be strict and the kids can be rebellious. But for people who have lost their blood family, this sense of community is essential.

On Pose, the characters attend “balls,” or lavish, underground parties where members of competing houses dress up in elaborate costumes and walk a makeshift runway. They dress to a theme (like “Dynasty”) and the winner is whoever executes that theme with the most “realness.” Ball culture has been seen onscreen before, notably in the cult documentary Paris Is Burning, but Pose paints it at its most splendid and thrilling. It’s a stage for a work of satire: people rejected by society rendering an over-the-top world of their own. There, they aren’t just free; they belong.

The most revolutionary character on Pose might be Stan, a cis white male. He’s relatable to anyone who has followed a traditional American path of marriage (to a loving wife, Patty, played by Kate Mara), children and a white collar job. But Stan has a secret attraction to trans women, which is a story as old as transgender history: straight men have always secretly coveted, courted and sometimes destroyed the lives of the trans women they don’t dare to love in public.

But it is the first time onscreen that a story like this has been told with nuance and understanding. Although the transgender movement has made major waves in Hollywood in the past several years, the men who love trans women have stayed mostly invisible. If they’re acknowledged at all, these men are written off as closeted gay men in the midst of a sexual identity crisis. Yet it’s widely known in the trans community that men who love trans women are often straight, and they exist within every strata of American society. A character like Stan, a polished businessman picking up a trans sex worker, is all too familiar to many trans people. His story is nearly as brutal as theirs.

In a life that has all but been programmed for him, Stan finds himself disillusioned with a trajectory that he isn’t sure he ever chose. His colleagues seem to read from a script; buying his wife a dishwasher becomes a crisis of identity. Who is he? Living by the playbook ultimately leads him to seek out the taboo subject of his desire, and through his complicated relationship with Angel, he finds that she is more authentic than anything else in his life. He’s hungry for something that his picturesque suburban life can’t give him: something real.

This juxtaposition of what’s real and what’s a performance is part of what makes Pose so successful. Without boring the viewer to death with heavy-handed political arguments, it shows the humanity that connects all kinds of people–and how we all end up performing. Straight white society becomes a caricature to black homeless LGBTQ youth who re-create the world from which they’ve been exiled. These kids who are criminalized and demonized for wearing drag, or trying to change their gender, readily point a perfectly lacquered finger at the fact that all the world’s a stage. Their conservative critics–the people walking Madison Avenue, or the parents who threw them out because they didn’t wear the right clothes or act the right way–are in their own form of drag. 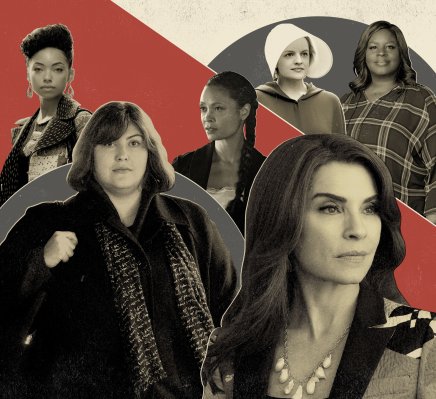 Female Rage on Television Reaches a Boiling Point in Dietland
Next Up: Editor's Pick