How Ghostbusters: Afterlife Fits Into the Long-Running Franchise

Perhaps it’s only natural that the Ghostbusters franchise won’t stay dead. The beloved 1984 horror-action-comedy has already spawned two sequels, and on Friday, a fourth Ghostbusters film will emerge. Ghostbusters: Afterlife is directed by Jason Reitman, who is best known for films like Juno and Up in the Air, and who is also the son of original Ghostbusters director Ivan Reitman.

The new movie stars Stranger Things’ Finn Wolfhard (no stranger to wearing a Ghostbusters costume), Mckenna Grace, Carrie Coon and Paul Rudd, and it takes the ghost-busting action from the streets of New York City to a small town in Oklahoma. Although it is extremely indebted to the original movie (it’s not a spoiler to say that a familiar face or two appears), Ghostbusters: Afterlife is actually a bit of a departure from the ‘80s movies—and even a departure from the 2016 film whose approach to rebooting the franchise sparked an ugly controversy.

So, if you’ve got questions about Ghostbusters: Afterlife ahead of its premiere on Nov. 19, who ya gonna call? We’ve got you covered. We don’t bust ghosts but we can answer questions.

The sequel is about the next generation of Ghostbusters

Ghostbusters: Afterlife focuses on Callie (Coon), a single mother, and her two kids, teenage Trevor (Wolfhard) and awkward wiz-kid Phoebe (Grace). Facing eviction, they have no choice but to leave the city and head for the dilapidated old farmhouse that Callie’s estranged father left them after his death. They hit the road and make their way to Summerville, Okla., a small town where nothing normally ever happens—but lately, there’s been a lot of scientifically inexplicable seismic activity, as Phoebe’s new teacher Chad Grooberson (Rudd) explains. As Phoebe makes her first friend in her excitable classmate who just goes by the nickname Podcast (Logan Kim) and Trevor begins crushing on his coworker Lucky (Celeste O’Connor), everybody finds themselves embroiled in a ghostly adventure—and it turns out the Proton Packs and broken-down Ecto-1 in the farmhouse garage might actually be their inheritance.

Though initial trailers for the film were somewhat coy, promos that have come out closer to the release (not to mention a flood of spoilers from a surprise showing at New York Comic Con in October) have made it pretty clear that Ghostbusters: Afterlife will indeed feature some characters from the ‘80s movies. Afterlife is a direct sequel to those two, and there are several plot points that directly reference or echo the story of the original. (Ghostbusters 2 is presumably also canon, but Afterlife doesn’t really explicitly reference it to the same extent.)

To say more about how Afterlife connects with the original Ghostbusters might venture too far into spoiler territory, but let’s just say that there are some characters (human and ghost) that reappear, as well as some additional connections and plenty of Easter eggs.

Afterlife is not, however, related to the 2016 Ghostbusters directed by Paul Feig. That film, which starred Melissa McCarthy, Kristen Wiig, Kate McKinnon and Leslie Jones as an all-women team of Ghostbusters, was a true reboot of the series. Some of the original cast members did appear in cameo roles, but as new characters. That Afterlife exists and has no connection to the 2016 movie is somewhat of a touchy subject. Feig’s film got a mixed critical reception at best, but it’s infamous for sparking an ugly, misogynistic backlash among so-called fans of the original who were upset that a group of women, rather than the old guys, were busting ghosts.

The controversy, combined with a very disappointing performance at the box office, prompted Sony to abandon a plan for a sequel. Instead, they developed a third movie set in the original continuity, eventually getting some of the original cast and Ivan Reitman’s son Jason on board, with his father producing. (The controversy didn’t quite end there; Reitman’s comment, in a 2019 interview, that his film would “hand the movie back to the fans” was met with much consternation, though he later said he was misinterpreted and he admired Feig’s film.)

So, Ghostbusters: Afterlife is very much a direct continuation of the original Ghostbusters. However, it’s also a very, very different sort of movie in surprising ways—some of which are more effective than others.

Ghostbusters: Afterlife has a very different setting and tone than the originals

Ghostbusters was beloved in part because it was a mashup of several different genres at once—comedy, horror and action. Afterlife is all of these things, but it adds a fourth genre to the mix: it’s a coming-of-age story, too. (In many ways, it’s more akin to Stranger Things’ loving ‘80s nostalgia than the actual ‘80s movies, and not just because of Wolfhard’s presence in both.)

For as much as toxic parts of the fandom complained about the 2016 movie’s female protagonists, they so far aren’t making too much of a stink about the fact that Afterlife’s main character, Phoebe, is a young woman. Some spoilery nepotism aside, the characters in the 2016 film are closer to the original Ghostbusters than Phoebe, brother Trevor and their diverse friends are.

While the original Ghostbusters—Peter Venkman (Bill Murray), Ray Stantz (Dan Aykroyd), Egon Spengler (the late Harold Ramis) and Winston Zeddemore (Ernie Hudson)—were middle-aged men starting a business together, this next generation of Ghostbusters are adolescents. Rather than the somewhat grimy setting of New York City in the ‘80s, Afterlife takes place in a small town that’s dripping with Americana—a place where the local malt shop is somehow still bustling and it’s basically golden hour all day long. It’s not quite saccharine, but it’s certainly sweet. The original films, meanwhile, had a bit more of a flippant edge to them, and they never really tried to be heartwarming in the way that Afterlife is.

There are still plenty of wisecracks, light scares and some action sequences that are far more kinetic and elaborate than anything in the first two films, but despite being so closely tied to the originals, Afterlife fundamentally feels like a different movie. Ghostbusters and Ghostbusters 2 were adult comedies that kids also liked. Afterlife is much more intentionally family-friendly.

Ghostbusters: Afterlife takes the franchise in a new direction—until it doesn’t

If you’re looking for a pretty fun movie about some kids going on an adventure and finding themselves, Ghostbusters: Afterlife works, for the most part. The Easter eggs and connections to the original films—basically its place in Ghostbusters as a franchise—are somewhat ancillary and borderline unnecessary. A kid who has never seen the first two movies could very well walk into the theater and enjoy Afterlife without any prior knowledge or nostalgia.

However—and it’s again hard to talk about this without spoiling things too explicitly—at a certain point, the nostalgia and debt to the ‘80s movie basically consume Afterlife, Muncher-style. To give an oblique hint of what we’re talking about: Afterlife features two post-credits scenes. Neither scene features Phoebe, Trevor or any other “new” character introduced in the film.

So, even as Afterlife does in many ways stretch what viewers can expect from a Ghostbusters movie—introducing new themes, tones and types of characters—it also feels the need to stick to the originals. For viewers who are excited to spot Easter eggs and feel that nostalgic rush when an old favorite steps into the frame, this is great. For those who were enjoying a surprisingly new, surprisingly effective sort of story in the Ghostbusters universe, it’s perhaps a bit of a bummer. The franchise pivoted after the ugliness the 2016 reboot sparked, managed to find a way to do something new even while going straight back to the originals, but in the end felt it had to be more explicit in proving its nostalgic ‘80s bonafides.

Ghostbusters, famously, ain’t afraid of no ghost, but Afterlife seems to be afraid to really take the Ghostbusters franchise into a new direction, even as it proves that there’s the potential to make the premise work in a different setting with a different tone. What’s the point of relying on the bankability of existing IP, alas, if not to shell out enough familiar elements of that IP to fill seats in a theater? Far from busting ghosts, Afterlife attempts to revive the dead.

There will likely be additional sequels to Afterlife, assuming it does well at the box office. (Critics have, for the most part, been mixed on the film, especially because of that nostalgic nose-dive at the end.) Whether those future installments continue to expand the Ghostbusters world or retrench in the familiar remains to be seen. The living don’t know what life is like after Afterlife. 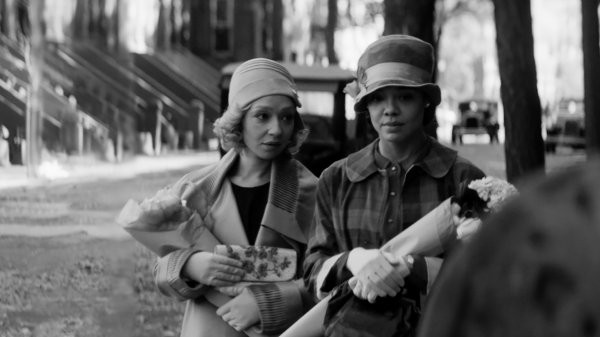 What To Know About Passing Before Watching the Movie
Next Up: Editor's Pick