The forthcoming Ghostbusters redux is probably the most controversial film of the summer. In varying degrees of coded sexism, critics have accused the filmmakers of breaking canon for rewriting the script with four women as the titular ghostbusters. “It just looks like a really half-assed attempt to cash on on the Ghostbusters name,” one Redditor wrote. “The humor from the original movies was more subtle.”

And yet those who were actually in the original movies couldn’t be happier with the remake. On Wednesday night, Jimmy Kimmel brought together the ghostbusters from the new movie (Melissa McCarthy, Kristen Wiig, Kate McKinnon and Leslie Jones) with actors from the old franchise (Bill Murray, Dan Aykroyd, Ernie Hudson and Annie Potts; the absence of Harold Ramis, who died in 2014, was palpable and painful).

Bill Murray has historically been reluctant to partake in an expansion of the Ghostbusters franchise, but he has a cameo in the forthcoming movie. He elaborated as to what changed his mind:

“It was only because I knew these girls were funny,” he said. “When you see the film, you’ll delight in the film… This is a tough movie to pull off because it’s a tough concept, and Danny and Annie and Ernie and I were cheering like we were at a sporting event at the end of it.”

Watch the full conversation above. 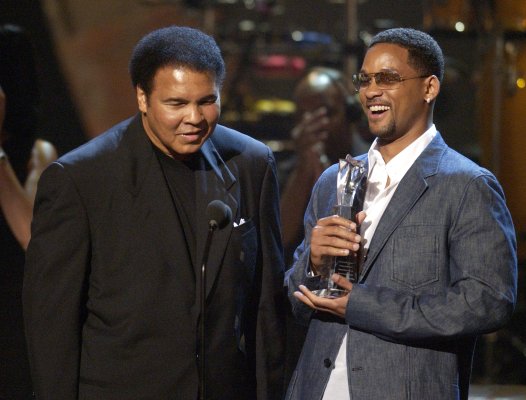 Muhammad Ali Biopic Ali Will Return to Theaters for a Limited Run
Next Up: Editor's Pick